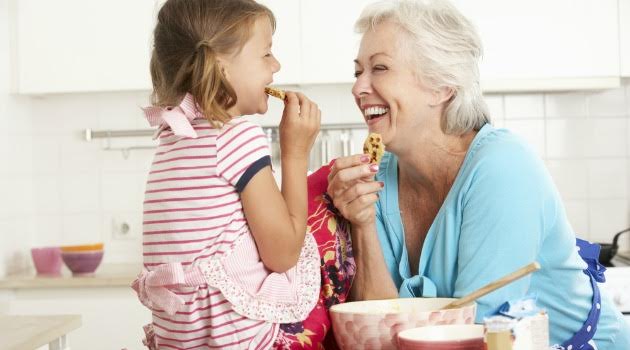 Foodie get-togethers tops the list of favourite past times with grandparents when growing up. Over half say nostalgic nosh reminds them of grandparents.

New research from leading older people’s charity, Age UK, has found that food triggers the nation’s fondest memories of their grandparents, with two in five Brits (40%) saying a favourite time with their grandparents when growing up was eating food together for family occasions. More than two fifths (44%) believe that food has played an important role in their relationships with their grandparents, so much so that over half of the population (53%) are reminded of their grandparents by retro refreshments and nostalgic nibbles.

Of those who said that food reminds them of their grandparents 16% cited home baking as the most likely to bring back good memories. Remembered treats included rock cakes, fruitcakes and home-made apple pie. Over a tenth (14%) are taken back to their childhoods by a traditional roast dinner, with even just the smell of roast potatoes triggering wonderful memories from the past. Some of the special treats that make people feel nostalgic include ice cream sandwiches, tinned peaches with evaporated milk, iced gems and party rings. For others it’s as simple as a custard cream or a cucumber sandwich.

Revealed as Age UK prepares to celebrate Grandparents’ Day on Sunday 2nd October 2016, recognising the contribution made by the millions of grandparents every year, the survey found that food remains central to the nation’s relationships with their grandparents with over a quarter of people choosing having Sunday lunch together as a favourite activity (27%) and just over one in five (22%) fondly remembering baking or cooking with their grandparents.

Confirming that Brits value their grandparents and the role they play in their lives, more than three quarters of adults (76%) said that their relationship with their grandparents was important to them[vii]. This may be partly for highly practical reasons, given how important grandparents often are to their families on a daily basis. The amount of informal childcare provided by grandparents is on the rise and is now valued at a whopping £7.3 billion a year. But grandparents are valued for many other reasons too, including the emotional support and encouragement they offer younger family members.

Nearly two fifths (38%) of the survey respondents believe their grandparents have taught them good manners and more than a third (34%) that they have had passed onto them vital lessons and knowledge for life. Precious time spent with grandparents has also led to skills being adopted such as playing and learning the rules of a game (25%), knitting, sewing or crocheting (16%) and the handing down of family recipes (15%). Rather wonderfully, a quarter (23%) felt that their grandparents had taught them a sense of humour.

Roxanne Pallett said: “I am very proud to be supporting Grandparents Day for Age UK as I was brought up by my mum and my grandma. My grandma played a very special role in my life from an early age and was like a second mum to me. In our home, music and food were the soundtrack and score to many memories, in particular my Grandma’s spicy shepherd’s pie which she named ‘Concoction’ because she wouldn’t reveal the recipe to anyone! We would have that on a weekend, followed by her infamous chocolate cake which she would bake from her well weathered Bero Book which I still have today. Our kitchen would always have a delicious aroma of my Grandmas cooking, accompanied with the sound of Tina Turner or The Bee Gees playing on the radio.

“As well as reminding everyone lucky enough to have grandparents to spend more time with them, I also hope to encourage everyone to get together to share their family recipes that most remind them of their grandparents and with this we can aim to raise money for the charity that supports our most treasured generation.”

Joe Sugg said: “I spent a lot of time with my grandparents growing up, and they taught me a lot of valuable lessons in life, stuff that I still live by today. I also have a strong belief in respecting your elders and giving back to people in later life.

“That’s why I am encouraging people to show their appreciation for their grandparents and support older people across the country, by getting together to hold a nostalgic fundraising feast to raise money for Age UK. All you need to do is bring along an item of food that reminds you of your grandparents and make a donation to take part. The money raised will help the Charity support older people across the country, providing advice, support and companionship to those who need it most.”

Brian Turner said: “I have great memories of my mother’s mother, we called her Grandma Nelly and she had an infectious laugh! Even though she lived an hour away by car, I remember all the family packing into her house, which was only small, for afternoon tea on a Sunday. Often there would be as many as sixteen of us, all gathered round the table. We often had tinned salmon, which was considered a real luxury, and salad, followed by a big trifle.

“I know that these days it’s not as easy to get-together as often. People are busy or live further away, but I believe it’s good to support your grandparents and enjoy time together as a family. Sadly our grandparents are not around forever and getting together to share food and stories is so important to keep that family connection. That’s why I am supporting Age UK this Grandparents’ Day and encouraging people to spend time with their grandparents. I’m also helping the Charity raise funds to support people in later life, by asking everyone to hold a nostalgic fundraising feast. All you need to do is bring along an item of food that reminds you of your grandparents and make a donation to take part. The money raised will help Age UK continue to offer vital services and support older people across the country.” Caroline Abrahams, Charity Director at Age UK, said; “Clearly, we are a nation that cherishes our grandparents and this is truly heart-warming; many play such an important role in the lives of their grandchildren and our survey shows that the positive impact often resonates for many years to come, enriching us as we move through our own lives. What’s more, it seems that it is food that often brings families together and provides us with our fondest memories. With this in mind Grandparents’ Day is a great opportunity to recognise the contribution of these very special people. And what better way to do this than by getting together to share the food that most reminds us of them, at the same time raising money for Age UK to support older people who need our help all year round – whether they are grandparents or not!”

This Grandparents Day Age UK is asking the nation to get together in the run up to 2nd October 2016, and celebrate by sharing the special treats and family recipes that most remind us of our grandparents and raise vital funds for the Charity.

From crumpets to crumbles, toffees to tried and tested family favourites, biscuit assortment tins to baked goodies, it couldn’t be easier to hold a fundraising feast for Grandparents’ Day. Simply get together with colleagues and friends to share the forgotten foodie favourites and nostalgic nibbles that most remind you of your grandparents.

It couldn’t be easier, simply:

· Find a time in the week running up to Grandparent’s Day, starting Monday 26th September, to get your colleagues and friends together

· Everyone makes a donation to eat the goodies

For more information on how to get involved visit www.ageuk.org.uk/grandparentsday where you will find downloadable fundraising packs and inspiring recipe ideas.

Age UK is also asking people to show their appreciation for their grandparents by sharing their messages of thanks on Sunday 2nd October. Celebrate your grandparents and show your love using the hashtag #GrandparentsDay to post recipes, nostalgic nibbles, thank you messages and photos in honour of your grandparents.

The money raised will help Age UK to continue providing advice, support and companionship to older people who need it most – including many grandparents! – from helping the Charity support its local Age UK partners to deliver hands-on local services such as lunch clubs and home safety checks, to funding hugely important national work like its free advice line (open 365 days a year) and campaigning and research.