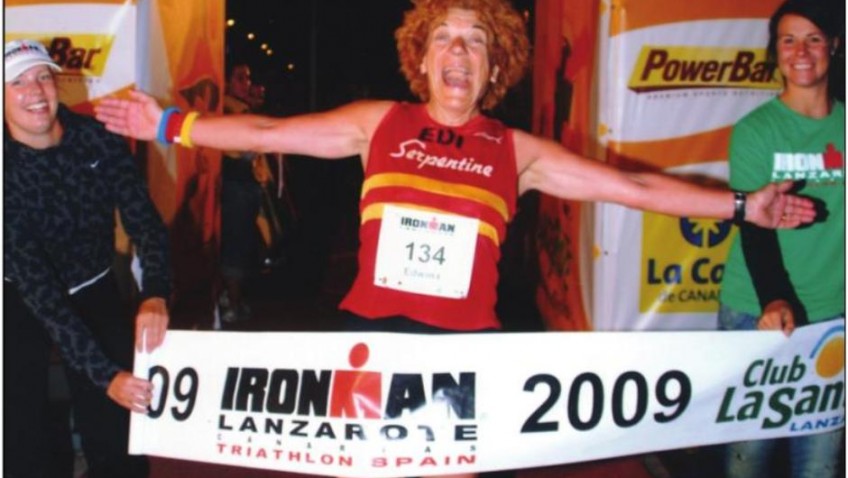 She may be 71, but Eddie Brocklesby is showing no signs of slowing down – and continues to complete gruelling Ironwoman triathlons.

Eddie, who is defying all stereotypes about ageing, has become the oldest British woman to complete the demanding challenge and holds the world record for her age range of 70-74.

Incredibly, despite having no anterior cruciate ligaments in either knees, and doing very little exercise throughout her adult life, the great grandmother regularly completes the 3.8km swim, a 180km bike ride and then a marathon.

Super Eddie, from Vauxhall, London, said she decided she would “quite like a go” at the mammoth task when she was 62 after watching her son complete the challenge.

She said: “I had been supporting my son over in Lanzarote, he had done about ten Ironman triathlons, and so I watched and thought I would quite like a go.

“I was far more scared of the swim out into the ocean, but I took a year off and trained for it.

“I don’t have an ACL in either knee, and running isn’t great for your knees anyway so I thought I needed to branch out to the cycling and particularly the swimming – although it has never been my favourite part.”

Eddie’s lack of swimming experience saw her move on to duathalons for a short time – a run, cycle, run, before she mastered her strokes through Swim for Tri.

To keep up with other athletes, Eddie now trains every day, while eating a lot of vegetables and protein to keep up her sporting ways.

“I think you have to work on the strength side of training when you get older. My 10k time hasn’t changed much in five years,” she added.

“Doing more has kept it up. But yes, you do have to do more training the older you get. Doing triathlons doesn’t seem to affect me anymore, but maybe I’m not trying hard enough.

“I tend to swim in open water twice a week, I would cycle probably a longish distance once a week as well – I did the horrendous Bike London recently – so I do ride over 100k once a week.

“I try to keep the running to a minimum really, because there is no point in pushing my joints too hard.”

Triathlons have also helped Eddie grieve the passing of her husband, with running helping her to get back on the track.

She said: “I started when I was fifty and I did a half marathon. My husband died when I was 52 and the small running club I was part of sorted out a place out for the London marathon for me.

“That was the beginning of my running career.

“It helped me enormously with getting over the loss of my husband. I think there is a real feel good factor – you are in control when you are out for a run and when you are alone or whether you are in company, you do feel much more energised at the end.

“I think you feel more able to make decisions, more confident, more in control of life. So there is a feel good factor with all the endorphins flowing.”

Eddie, whose three children compete in triathlons or long distance-cycles, said it is never too late to get involved in sports.

“I think it is more important as you get older to have some sort of physical activity, even if it is just a walk or the recommended 150 minutes a week,” she said.

“Some physical activity makes such a difference whether it is emotional or physical. It’s never too late to start.

“I didn’t start till I was 50 but I know people who have started strength training at 70.

As well as fitting in all her training and time travelling to competitions, Eddie has just been made an honourable living legend for the Remember a Charity in your Will campaign.

It aims to encourage people to leave a donation to a charitable cause in a will and Eddie knows all too well how important this vital act of kindness can be.

“I have done a various amount of my activities for charities. I have been a social worker for 50 year and I know the value of charities and what they do, especially at a time of significant local government cuts.

“Fundraising is a major source of income for the charitable sector and it is vital that we do everything we can to uphold the sector, especially for charities that we have a personal link to. I think everybody does have a charity to which they could really make a difference.”

To watch the Living Legends documentary and find out how you can get involved, visit www.RememberACharity.org.uk