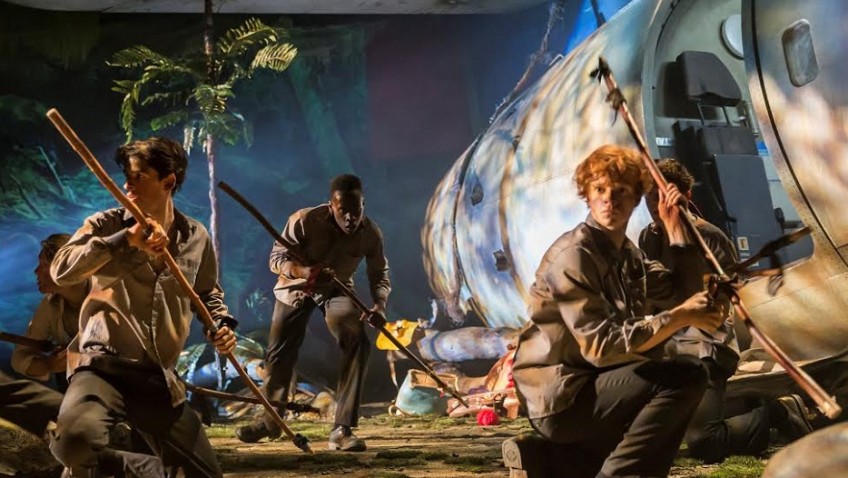 Onstage sits the smoking, broken, bulky fuselage of a plane, dropped into a jungle of splintered trees. A debris of plane parts, suitcases and clothing spreads out around it, spewing down a slope into the auditorium. The survivors? A bunch of schoolboys, trapped together on a remote tropical island at a time of war.

William Golding’s dark, dystopian novel of 1954 (with film in 1963) demonstrates just how quickly human beings can descend from order, rationality, altruism and civility into a mayhem of cruelty, mass hysteria, blind obedience and unrestrained violence. Generations of schoolchildren have studied the story for exams, and Nigel Williams’ stage adaptation gives the latest batch much to discuss. For those who don’t know the book, though, a certain lack of clarity in coverage of events in a telescoped script could prove a bit frustrating and puzzling at times.

The impressive set, its blinding sun, its thunderstorms, smoke and fire, evoke time, place and atmosphere beautifully, while a fabulous use of space gives constant flow to multi-level action and movement, as scenes of mayhem, ritualistic dance and fervent conflict, excellently choreographed, burst from powerful slow motion into fluid, frenetic speed.

While the cast pour sweat and energy into the story, a mobile phone on a selfie stick allows the boys (played by older actors) to employ modern day intonations, expletives and stances and even mention Bear Grylls and I’m a Celebrity – Get Me Out of Here! Characters, not all as distinct as they might be, are well on the way, and the overall effect is powerful and disturbing.

As arrogant public school choirboy Jack Merridew, who sees himself as a natural leader and hunter, virtue of being a member of the privileged class, Freddie Watkins looks particularly scary and demented in full war paint. It’s he who initiates the bullying of lower class, more intelligent, Piggy (now a Lancashire lad played by Lee Rae) who still sees sense even after his specs are stolen for fire-lighting purposes.

But Piggy, reduced to a snivelling wreck, meets a terrible end, though it’s peaceful, nature-loving Simon (nicely portrayed by Keenan Munn-Francis) who’s the first to perish. Ralph too (James Phoon) has a lot of sense and kindness but, with insufficient strength and willpower, he’s cowed in a world where the survival of the fittest equates to the survival of the ‘gittest’.

Even innocent little Perceval (played by Guy Abrahams, the only actual young boy on stage) is corrupted in the end, while wood-be kindly twins Eric and Sam (Fellipe and Thiago Pigatto) are forced to change sides against their will by merciless Roger (Matthew Castle), demonic henchman to his brutal Chief.

As fear, anxiety, hopelessness and helplessness paralyse the side of law and order, cruel factions, not held in check at the outset, dominate and spread, until the last vestige of order, sense, cooperation and democracy, represented by the conch shell, is trampled to bits underfoot. Yet when the established order and morality of the outside world suddenly returns in the form of a rescuer, murderers, sadists, reluctant converts and victims alike are again nothing but frightened, vulnerable, blubbing kids who bow their heads in shame, forced to remember who they really are – or were. Exuding oodles of feel-bad factor, the play packs a hefty punch!