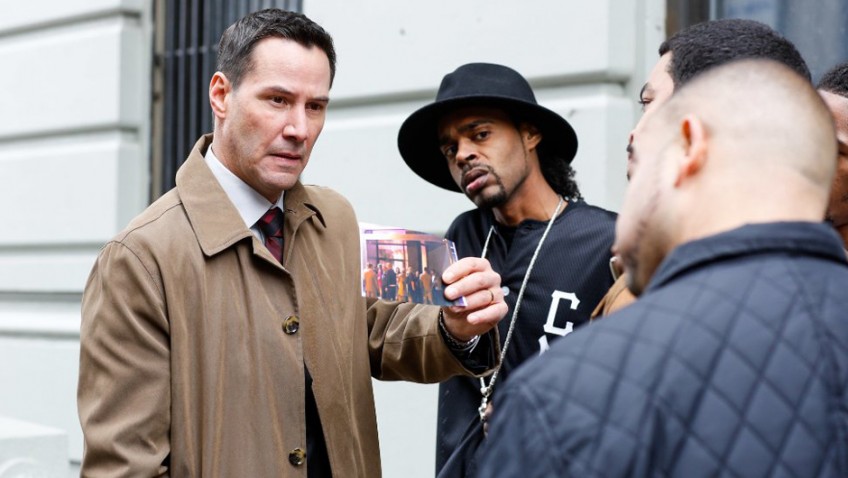 We all have a soft spot for Keanu Reeves, whether from our memories of Johnny Utah in Point Break, Thomas N Anderson in The Matrix, or Scot Favor in the coming-of-age movie, My Own Private Idaho. But like most actors who turn 50 without the good fortune of finding a vehicle to reboot their careers, he is at risk of being tossed on the precarious sea of underexposed movies like Exposed.  Reeves has little to do in this movie that wears its troubled production history on its sleeve.  Elements of Gee Malik Linton’s original supernatural thriller about child abuse certainly remain, but they have been compromised in a hopeless and awkward attempt to turn Exposed into a Keanu Reeves American cop movie. Young, pretty and friendly Isabel de la Cruz (Ana de Armas) declines the offer of a taxi after a night out, and walks to the underground station at 191st Street and Broadway down a long, deserted subway corridor in her mini-dress. She manages to avoid the attacks we anticipate when she passes by a couple of bums.  After a while, the heel on her shoe breaks and we fear for the worse.  Then an albino man dressed a bit like a businessman appears on the platform. Suddenly Isabel sees him floating over the tracks as he turns back to lock eyes with her.   A devoted Catholic, Isabel freezes in amazement, as though she has seen a religious miracle.

Meanwhile, back at the precinct office, Detective Scotty Galban (Reeves) is determined to investigate the brutal murder of his partner who may or may not have been found dead in the underground at 191th Street and Broadway. The evidence is sparse and bizarre.  The piece of evidence that is haunting Galban is a photograph of a young teacher, standing in front of a nightclub with some suspects who might have been under police surveillance.  There is also the shoe heel. No one but Galban seems interested in bringing in this young woman for questioning.  Galban believes she is a crucial witness, but as it emerges that his partner was a dirty cop, there is no real will to open the investigation and a can of compromising worms.

Meanwhile, the beautiful, saintly Isabel is having troubles of her own. Her fiancé is a soldier in the Middle East and it remains to be seen whether he will make it home for the wedding.  As evidenced by the opening scene, where Isabel leaves a nightclub, her immediate circle is in gangs involved in criminal activity.  Her parents are not exactly the nurturing, supporting kind either.  Isabel then has to shelter in her bedroom a young girl in the neighbourhood who is being abused and hope that her parents do not find out.  But while Isabel’s point of view becomes our own, how reliable is it? And what is the connection between Isabel and Galban’s murdered partner?

Unfortunately, by the time we learn the answers to these questions, it’s too late to really care. There are other questions, however, that you might find yourself asking, such as how is it possible that Galban did not know that his partner of many years was so corrupt?

There is no question but that the strange man floating over the train tracks is the high point of the film.  After that a semblance of that mysterious mystical figure reappears from time to time dressed in a ridiculous and vulgar long robe-like dress with big sleeves.  It’s fairly obvious he/she is a vision, but it remains an unexplained vision.

Isabel and Galban do not meet until the very end of the film and so their two stories remain parallel, with Isabel’s the more interesting and dominant of the two.  Galban spends more time being seduced by his dead partner’s wife (Mira Sorvino) than in discovery very much, which is another problem, as it turns Galban into a very weak, as well as dim cop.

Galban remains one of the most lacklustre and underwritten world-weary cops in recent memory and what we know about him, you could fit on a nail head. Aside from the attractive Ms de Armas, no one in the film looks very well either, and that includes Sorvino and Reeves.

Gee Malik Linton does not come out looking very good either and one can only extend to him the benefit of the doubt for his unrealised vision.  While bizarrely, his Writer credit remains, he has removed his name from the credits as Director (replaced by a pseudonym, Declan Dale).  Keanu Reeves must wish he could have done the same.