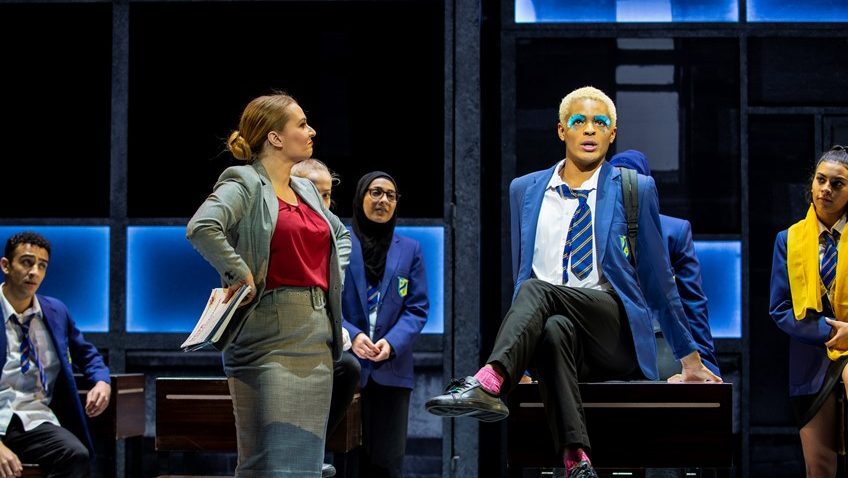 Based on a true story, the hit musical Everybody’s Talking About Jamie hits Bristol on a wet and miserable Tuesday evening in October. But by the time the theatre empties there’s nothing miserable about the crowd that troop out into the night for another soaking on their way home. In fact they have been thoroughly entertained by the cast and ensemble in this stage version of the coming of age story that is Jamie New.

For those of you that don’t know, Everybody’s Talking About Jamie is a true story about a young, Northern working class boy from a broken family at that crucial age in his life as he prepares to leave school and venture out into the big wide world. But Jamie (Layton Williams) is different, not for him a humdrum job in a local factory in tough, working class Sheffield, no – Jamie has bigger ambitions as the stage calls him.

But before he gets there he has all the baggage that a young life entails and that it can throw at him as he comes to terms with what he is. In real life, aged just 14, Jamie comes out to his Mum, who is his rock, as bisexual, thinking that will make it easier for her to accept him for what he is. Her reply, in typical no nonsense Northern fashion was “Son, you’re gay.”

And it is that rock that is Jamie’s biggest supporter in the show, played superbly by Amy Ellen Richardson, who struggles through life as a single parent with no help from Jamie’s father who doesn’t want to know him because of what he is. She supports Jamie to achieve his dreams even though she struggles to make ends meet herself and she covers for the absent father that Jamie so wishes was a part of his life.

But Jamie doesn’t just have his Mum to support him, he also has the formidable Ray (Shobna Gulati) fighting his corner as well. Ray has, shall we say, been around the block a bit, she’s a tough cookie, but in fact she’s the nearest to a father that Jamie ever had.

Faced with bullying at school for what he is and schoolmates that mock him for being gay, a careers teacher that disapproves of his behaviour and a world that is determined to put him down, Jamie is equally determined to live his dream and that dream is to be a drag queen.

His journey, guided by his mentor Hugo / Loco Chanelle (Shane Ritchie) is not just one to the stage and fulfilling his ambition, but it is one through the early stages of his adulthood as he slowly starts to learn his craft. Along the way, he learns how to look, dress and walk like a woman, especially in those heels, but he also learns other arguably more important lessons. He learns that life is full of battles, but he also learns forgiveness as well.

This is not a show about a young boy coming out, it’s a show about one young man following his dreams , about overcoming adversity and about the love and support that he receives (or not) from those closest to him. It’s a story of perseverance in the face of adversity and it’s a story that shows if you are strong enough then you can succeed and live your dreams.

And it works, and it works very well indeed. Layton Williams, with his long legs captivates as Jamie, especially in the dance routines, Shobna Gulati is superb as Ray and Shane Ritchie is an understated but compassionate and understanding Hugo. The supporting cast are excellent but the real hero of the show, as in real life, apart from Jamie, is his Mum. Her character is eminently believable and Amy Ellen Richardson plays her in such a compassionate way allowing the audience to feel her every emotion as she supports her extrovert son through his struggles coming out.

Go and see the show – you won’t be disappointed!

Everybody’s Talking About Jamie is at the Bristol Hippodrome until 23 October. It then tours through the UK until April next year. To find out tour dates and venues and for more information on the show go to the website here.