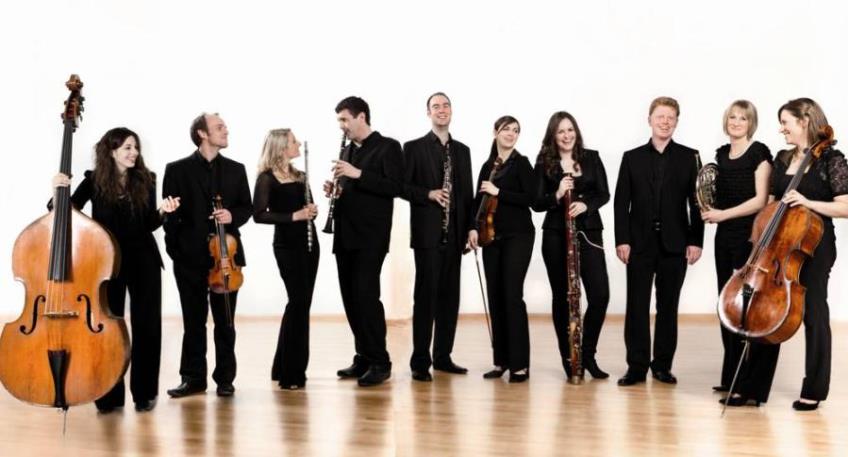 In a stylish programme of mighty pieces, all played with stunning virtuosity, an exhilarating first half and stupendous second heralded a finale that was out-of-this-world. What a fittingly fabulous farewell performance with Ensemble 360 this was for international clarinettist Matthew Hunt, superbly showcasing his outstanding talents and versatility.

Matt, stalwart of the eleven-piece chamber group since it formed in 2005, has, like the rest, poured his sparkling expertise both into performing dynamic concerts for adults and children, and equally passionately into Music in the Round’s ambitious educational and community projects, designed to spread the joy of top notch music and musicianship far and wide. His clarinets (which toot worldwide and on films like Love Actually and Pride and Prejudice) featured in three of the night’s four glorious pieces, while his fine storytelling voice also came into play in the first piece, the trio version of Stravinsky’s The Soldier’s Tale Suite.

Full of drama and melody, this devilish, Faustian folk tale, originally scored for seven instruments, three narrators and dancers, was rearranged by Stravinsky after the end of WWI for violin, clarinet and piano. Five of the suite’s episodes are played, as the soldier marches optimistically home but, alas, runs into the Devil on the way and does a foolish deal with him. The trio ends, thankfully, at a point when the soldier’s still winning. As the piano paces, violin and clarinet make the most of their playtime with Stravinsky’s spiky outbursts, circus-like fanfares, attention-grabbing excitement, confident, thrusting, rhythmic momentum and melodic loveliness. When the players’ instruments dance and sing through Stravinsky’s quirky take on tango, waltz and ragtime (which he never actually heard, but only saw written down), we marvel that a princess can recuperate so quickly from illness to dance such a long, winding, uneasy routine.

Once fiery devil and violin leave, Brahms offers a real contrast in mood and rhythm. Inspired by the fine playing of clarinettist Richard Muhlfeld, the composer postponed his retirement to write his 1894 Clarinet Sonata in E flat, Op.120 No.2 ( and No.1). With beautiful, serene melodic shapings, and some grand work for piano, too, it’s considered one of the greatest pieces in the clarinet repertoire. In fine style Matt and pianist Tim Horton showed why.

Interestingly, two players were reading their music on tablets, turning the pages via foot pedals. This means pianist Tim no longer needs a page-turner, which is great, but he does now have five foot-pedals to operate. Of course, in the event of a foot-pedal mix-up there’d be complete chaos, with players turning the pages of a colleague’s music instead of their own. Fortunately/unfortunately this didn’t happen tonight.

Uplifting music to warmly smile by was conjured up next by violinist Benjamin Nabarro and Tim in Mozart’s Sonata for Violin and Piano in G, K301 from 1778, delighting every ear with singing, echoing, entrancing melodies and perky, bouncing, giggling passages. Then, fast-forward to 1938 and Bela Bartok’s astounding Contrasts.

The great jazz clarinettist Benny Goodman commissioned this piece from Bartok, and performed and recorded it with him, too. Our trio’s delivery was outrageously breathtaking! The delicious interplay of instruments requires technical wizardry, super versatility and rhythmic mastery at every turn, which players of Ensemble 360 have in abundance. With passionate flourish came acrobatic ripplings, shrieking proclamations, notes that leap and creep through registers and dynamics, abrupt, exciting changes in rhythms and tempi, pluckings, sawings, shimmerings and flutterings, thrilling violin and clarinet cadenzas, the fireworks of frenzied traffic jams and the sweet, hypnotic melodic magic in the Relaxation movement. In a series of wow factor, show-stopping miracles the three moved in perfect, breathtaking togetherness, instruments, hearts, minds, bodies, dancing with the music yet looking for all the world like it’s no challenge at all. Only Ben’s bow was getting frayed at the edges.

Playing with such skill, versatility, enjoyment and passion yet with such apparent relaxed and effortless ease is the mark of top calibre musicianship, of course. Aren’t we lucky! Thank you, Ben and Tim. Thank you, Matt – and Bonne Chance, Fare Ye Well and Alles Gute!