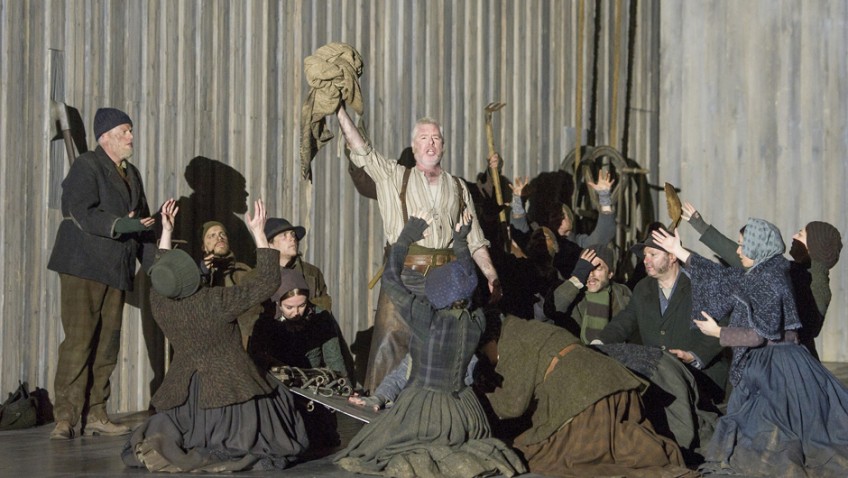 Norma (Marjorie Owens), a Druid priestess, betrays her people and her religion by sleeping with the enemy, namely Pollione (Pierre Auty), a Roman proconsul, and having two children by him. Pollione ditches Norma for Adalgisa (Jennifer Holloway), a priestess. The big question is will Norma do a Medea and kill her children or will she do a Lizzie Borden and kill her lover with an axe?

Norma, which premiered at the Scala in 1831, is one of the most demanding and difficult operas in the repertoire. Christopher Alden’s irritating production is no help at all either to the lead singers (who are often upstaged) or the audience.

There is no moon. There is no forest. The dominant feature of the set, a huge ugly barn, is a huge phallic oak log which is hung in different positions. The lead singers are constantly being asked to do awkward things with it.

Pierre Auty has to walk the log. You fear he will fall off. Marjorie Owens has to clamber on and off the log and sit on a precarious chair. It is very distracting.

The action is set in Gaul among the Druids during the Roman occupation in 50BC. The opera has been updated to the 19th century for no good reason and the acting is not good.

Norma was written for and created by Giuditta Pasta, the greatest singer actress of the day. The most famous aria, Casta Diva, is phenomenally difficult to sing and calls for a dramatic soprano of amazing flexibility. Casta Diva is then immediately followed by another aria, Come back to me, my lover.

Owens is in splendid voice. So, too, is Jennifer Holloway, and their duets, especially in Act 2, are among the high spots. There is good support from James Creswell as the head of the Druids and the chorus gets a special round of applause, the audience anxious to show solidarity in their much publicized financial plight. The finale has real dramatic power.