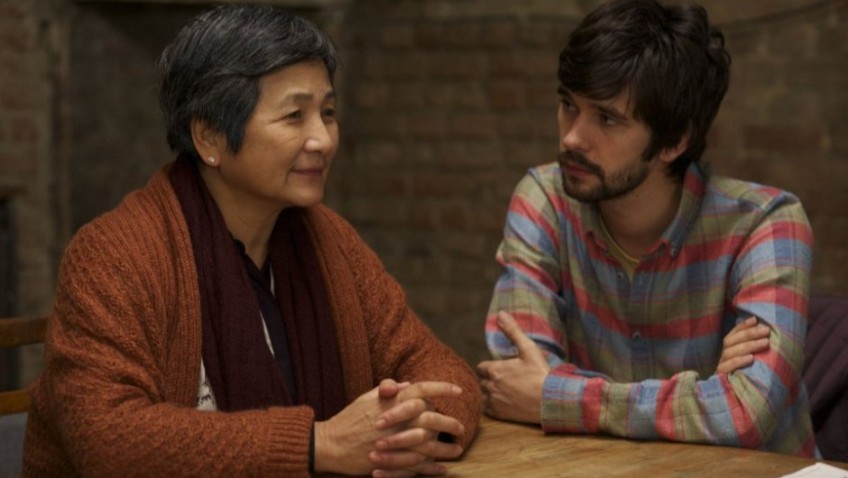 An emotionally straining performance in Lilting

A publicly-funded initiative of Film London, Lilting, written and directed by Hong Khau, brings British actor Ben Whishaw (Bright Star, Perfume) back from the heights of Skyfall (the last James Bond film) to his beginnings in the no-budget publicly financed film entitled My Brother Tom fifteen years ago.  Whishaw impresses in almost everything he does, and his casting here is essential to a slow-paced and quietly emotional, but rather precious and anaemic story about people overcoming barriers to form relationships.

A healthy looking Chinese/Cambodian woman, Junn (Pei-Pei Cheng) in her sixties, harbours resentment in her loneliness. Her handsome westernized son, Kai (Andrew Leung) has put her in a nursing home in London rather than inviting her to live with him.  Kai, a loving but exasperated son, tells her that she is beginning to forget things, and the set-up is temporary.  But there are other reasons.  As Junn has never integrated into British life, and barely speaks or understands English, it’s the most practical solution.  Then there’s Richard (Whishaw). Though Junn knows that Richard, whom she dislikes, is Kai’s roommate, she does not know that he is Kai’s lover of four years.

The last time Kai sees his mother she is settled in her new digs. A British suitor, Alan (Peter Bowles) offers her a bridge to a culture she has never embraced, telling her she is beautiful through a translator, and slow dancing with her to western music.  Sometimes language can separate, too, and the more Junn learns about Alan, the less interested she is.

Kai comes by to invite his mother over for dinner, telling her he will collect her.  She asks him why Richard does not drive him over.  Kai tells her he likes to take the bus.  This is a moment the grief-stricken Junn replays in her mind because Kai was killed in a freak accident before he boarded the bus.  From their flat in London, Richard also replays scenes of their life together — all, it has to be said, of the two of them in bed together. These imaginative scenes are well integrated into the present and prove to be an effective technique for expressing loss and memory in cinematic terms.

Lilting is an emotion-packed portrait of strained relationships between people without a common language who are drawn to one another through a shared loneliness or grief.  This is a heavy theme, and the well-observed film has poignant moments, but they feel unearned. The underpowered story seems eager to proceed from tear-jerking moment to tear-jerking moment omitting some background narrative that might help us care more about what is at stake.

That Junn (one of Hong Kong’s first action heroines who appeared as the wicked Jade in Crouching Tiger Hidden Dragon) is so relatively young and healthy looking and the care home that Richard calls ‘an awful place’ looks more comfortable, spacious and luxurious than his bachelor flat, are odd anomalies that are somewhat distracting.