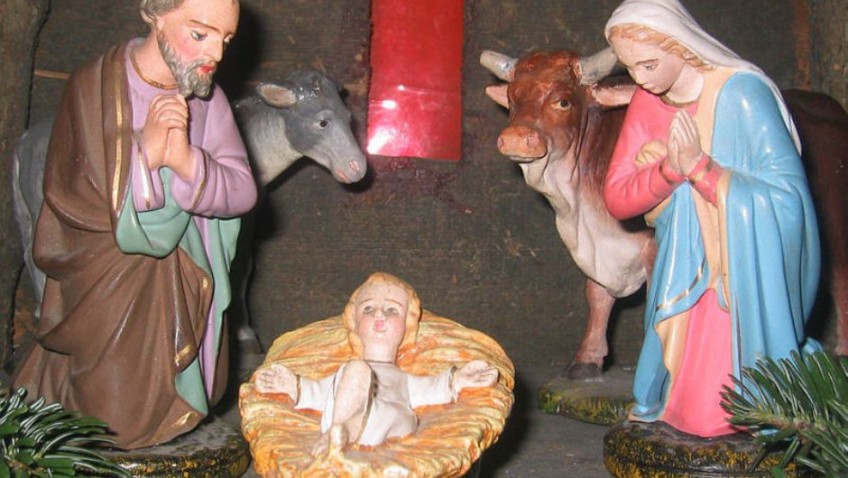 Elvis is in the stable!

The traditional school nativity play is under pressure to modernise the story and remove religious figures, according to users of a parenting website.

Parents on Netmums have given examples of characters such as spacemen, Elvis Presley and footballers being introduced to the nativity story.

There are also claims Christmas plays are being called “winter celebrations”.

Some parents are concerned Christmas traditions were being “pushed aside”.

About 2,000 parents have shared their experiences of how nativity plays are being adapted in some schools – and how there has been no nativity play at all in other schools.

They report how the story has been changed, so that rather than simply casting Mary, Joseph, shepherds, wise men and a donkey, there are parts for aliens, punk fairies, Elvis Presley, footballers, a lobster and a drunken spaceman.

Christmas carols have been replaced with Christmas-themed pop songs, report some of the parents.

There were also reports of schools changing the name of “Christmas” plays, with the suggestion that it was to avoid a specific reference to the Christian festival.

As a grandparent I look forward to seeing the school nativity play and while I can understand that there should be parts for everyone who wants to be in it, what has happened to the lead roles?

It seems that many schools are afraid to stick to the traditional plot of Mary and Joseph in the stable attended by angels and shepherds and wise men.

We are a multicultural society, but let’s not leave Christianity out of the mix.  I am happy to learn about other faiths; but let us not forget that the established religion of Britain is the Anglican Christian church.

We must be free to practice whatever creed we want, but with Christianity being the most widely practiced and professed religion in England, let’s not be ashamed to teach our children about the story handed down over 2,000 years.

As we get older we have the choice to follow our own spiritual path and many who were brought up in a strict religious regime elect to lapse or chose another way.  That is a matter of personal choice and is inviolable.  However, I feel it is important if only for the sake of later cultural understanding, that children learn the story of Jesus from birth to death and resurrection.

So much of our heritage is based on references in literature and art to a basic knowledge of the bible.  The stories are great, particularly the blockbusters of Christmas, the Flood and the Crucifixion:  in fact other faiths have similar stories.

So let’s not shy away from telling the “Greatest Story Ever Told” and bring on the cast of the Nativity.  We can include Elvis, a reindeer, a spaceman and even Santa Claus (who was originally a religious figure in St Nicholas) but don’t leave out Mary and Joseph and of course the baby Jesus.

It is considered that Christianity is the most widely practiced religion in the world so at least let the children of Britain enjoy the Christmas message.

What are your views on the ‘modernisation’ of the nativity play? We’d love to hear from you. Ed