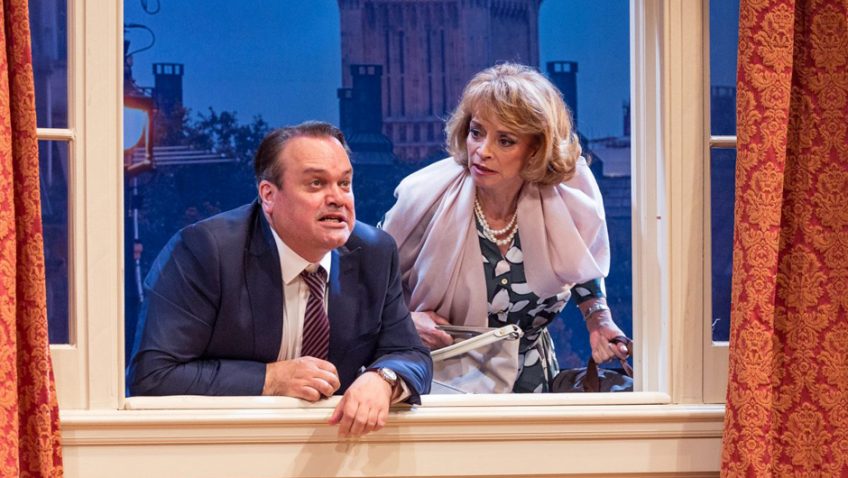 “Every Prime Minister needs a Willey,” Mrs Thatcher famously declared in the 1980s, provoking widespread titters, guffaws or tuts, according to taste. Ray Cooney’s political farce, originally written in 1990 and now updated, ensures Theresa (Maysie-Waysie) May also has a Willey, this time in the form of Junior Minister Richard (Dickie) Willey, played by Jeffrey Harmer (taking on the role from Andrew Hall ) – though it’s doubtful she needs him. Still, there’s plenty of mileage in the Willey gag. Susie Amy, Shaun Williamson and James Holmes in Out Of Order

In true farcical tradition, the philandering Tory Minister is about to indulge in secret, scandalous, cross-party hankey-pankey with Jeremy Corben’s secretary, Jane Worthington, played in Aussie tones by Susie Amy – in black, lacy underwear, naturally. A dead body, trapped under the karate-chopping sash window behind their hotel room’s curtains is the first major spanner in the works. After this potentially career-ending discovery, myriad cover-ups, lies and deceptions interweave and escalate through two acts with many a disastrous twist and turn. It goes without saying that unexpected comings and goings abound via that unreliable, karate-chopping window onto the balcony, as well as through the sturdy doors to bedroom, corridor and cupboard. In and out come and go Jane, her irate, hunky husband, Willey, a bewildered Mrs Willey (Sue Holderness), Willey’s secretary George Pigden, Pigden’s mother’s nurse, the offended hotel manager (played by Arthur Bostrom without so much as a ‘Good moaning’ even with his trousers down), a wily old waiter and the ‘dead’ body.

Shaun Williamson plays mummy’s boy, Pigden, Willey’s exasperated, put-upon secretary and dog’s body, hapless, hopeless, helpless, yet constantly called upon to clear up the messes and back up increasingly complex, ever shifting layers of lies and mayhem. James Holmes is particularly appreciated as the wily, shuffling, old waiter, Cromwell (reminiscent of David Jason’s Blanco in ‘Porridge’ but with a Midlands’ twang) while star of the show, outdoing even the spasmodically violent sash window, is David Warwick (and his wonderful shock of Father Ted hair) as ‘the body’. It’s not surprising he has all his drooping, dangling, flopping and falling down to a fine art: he first played the body in the 1990 tryout of the play! Though a trifle macabre, his brief stint as Pigden’s improvised ventriloquist’s dummy is a real treat, while his ‘dance’ with Pigden and Willey, in practice, they say, for the Brexit Conference Cabaret, is another.

Ray Cooney’s Olivier-award-winning play is well crafted to bring a steady input and build-up of clever, well timed developments and surprises. In fact, ‘Master of Farce’ Cooney, now in his eighty-fifth year, directs this production himself, creating a farce that’s less blatantly saucy and sexist than those in the Benny Hill style and with less of the breathless clatter of flash-bang-wallop farces of the past. For good or ill, this contrived, well-oiled chaos is more gently paced.

The sight of politicians behaving so ignobly, so deceitfully has some laughing long and loud; the majority, though, seem just pleasingly, warmly amused.

The play travels next to Bromley, Oxford, Swansea, Southend and Nottingham