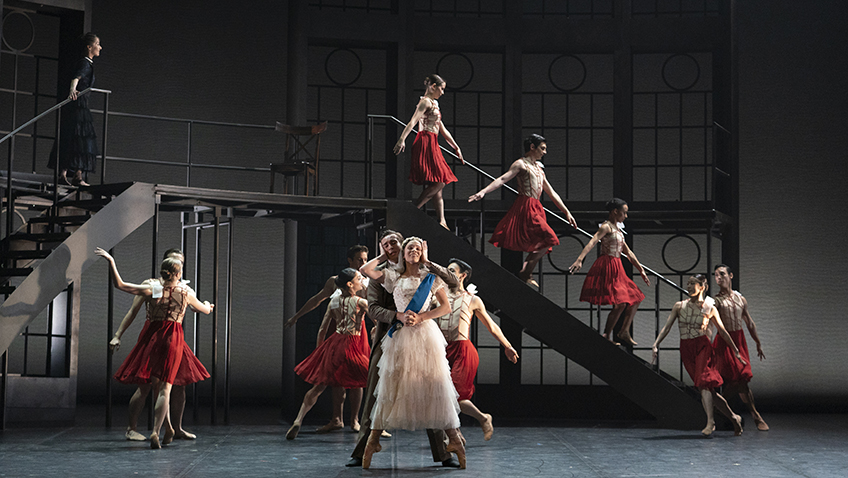 This thought-provoking drama is powerful and compelling

Queen Victoria spent 64 eventful years on the throne; Northern Ballet, with National Ballet of Canada, now spend two hours recounting all that and more in dance. Narrative-driven, character-rich, episodes are dramatised in flashback, the second act set further back in time than the first and the entire story is seen through the eyes of Beatrice, Victoria and Albert’s youngest daughter. 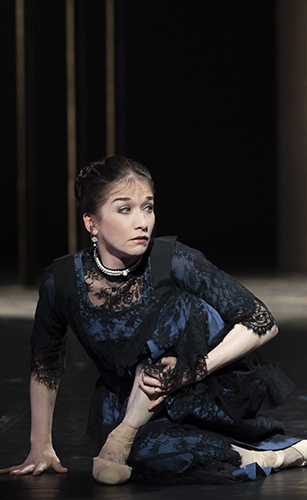 Pippa Moore, in her retirement season, plays the older Princess Beatrice. Dressed in black, she’s a soft, sensitive, expressive presence onstage throughout, a central character whose realisation and understanding of her mother’s life and relationships grow and change as the story unfolds. Charged with the colossal task of transcribing her mother’s 122 dense diaries, the dark figure of widow Beatrice reads, writes, and reacts to the events she reads of as the scenes are enacted before us. Angrily she tears out pages that repel or enrage her; wincing, she relives painful memories, or, as invisible as a ghost to the other characters, she dances with tender, wistful joy with her younger self and the handsome young Liko she falls in love with – a poignant, engrossing scene. Some of the most entrancing dances of the piece are trios such as this.

The quiet, obedient young Princess Beatrice, in soft powder blue, is fabulously brought to life in the dancing of Miki Akuta, expressively depicting how, having lost her father early on, she’s constantly brushed aside and thwarted by her deeply grieving mother. Physically, a bright white bust of the deceased Albert frequently comes between Victoria and anyone else. Beatrice is horrified by her mother’s intimate relationship with imposing, muscular John Brown (danced by imposing, muscular Mlindi Kulashe in a light kilt) and cruelly hurt as her young husband Liko (Sean Bates) is prised away from her to head as a soldier to Africa – and his death. She, like her mother, becomes a grieving widow in black by the end of act one.

Cathy Marston’s choreography is, for the most part, not so much traditional, smooth elegance than writhing, twisting emotional eloquence: it’s broad, earthy and swooning as Victoria (Abigail Prudames) comes under the influence of the captivating John Brown, and it’s full of sensuous, passionate bendings and intertwinings as she dances with Albert (Joseph Taylor) on their wedding night. Fine humour is used to evoke Victoria’s impossible work-life balance as one baby after another after another merges relentlessly from her bed while one red dispatch box after another arrives through her door until, exhausted, Victoria doesn’t know which way to turn – other than to Albert who then takes on the role of workaholic until his early death. 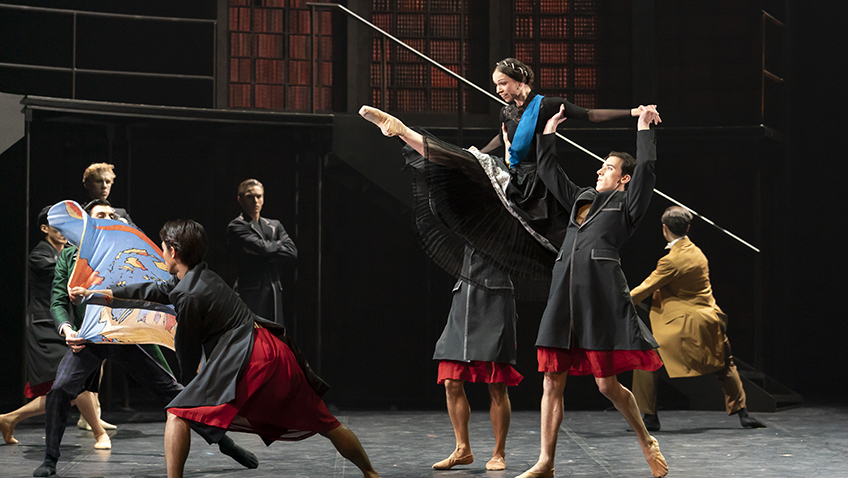 Taken aback by the scenes in the second act that tell of her mother’s lonely childhood, of the terrible tussles she’d had with her own mother, of her loves, losses and crippling burdens as both a young woman and a widowed queen, onlooker Beatrice finds her understanding of her mother growing. She begins to sympathise with this vulnerable woman, this working mother, the Queen and Empress whom, until now, she loved and obeyed yet regarded as a selfish, often jealous, tyrant.

Costumes, including Victorian dresses are designed to be light, partly transparent and cut-away so legwork can be fully appreciated, while the ensemble, often bare-legged and in red, floaty skirts regardless of gender or role, fills the stage with politicians, military men, family members and busy minions who toil at towering library shelves or up and down the stairway. 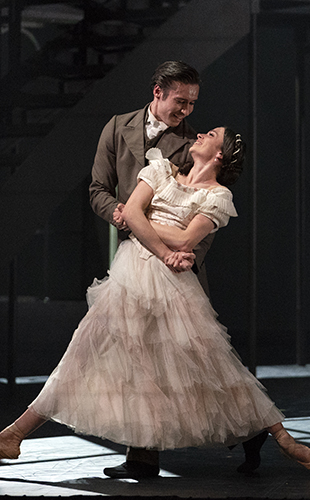 Philip Feeney’s music, composed for the Northern Ballet Sinfonia to reflect the drama onstage, is far-ranging and fast-moving, showing off individual instruments and blended combinations whilst telling the story through changing moods, pace and tone. The piano is often prominent, providing special snatches for piano-playing Albert, while there are crashes, spikes and tumbles as time and fateful events tick and rush on. From horn to harp, marimba, timpani and chimes to clarinet, bassoon, trumpet, trombone and strings there’s rich, ever-changing musical interest.

You’ll be on your toes to keep up with who’s who on the politician and family front but this busy, thought-provoking drama from dramaturg Uzma Hammed is powerful and compelling, and full of Northern Ballet’s characteristic creative originality.