Home / LIFESTYLE / Living well with dementia: how life can still be fun, worthwhile and heading forward 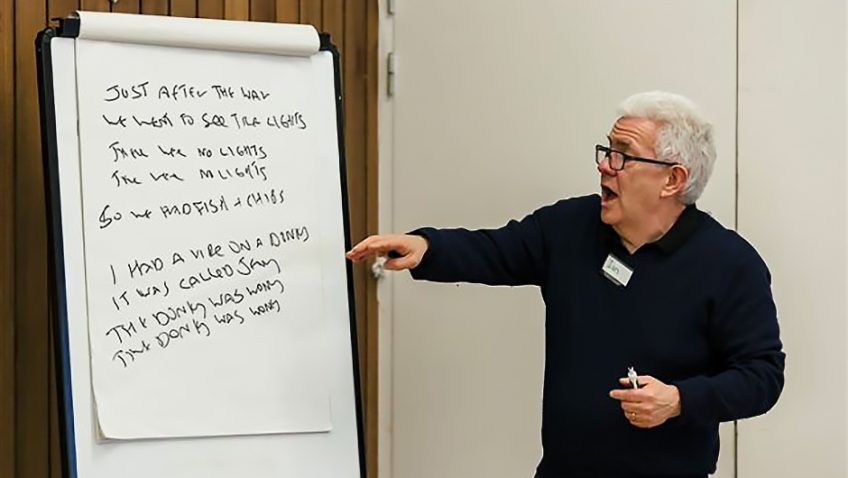 Living well with dementia: how life can still be fun, worthwhile and heading forward

For a chap with Yorkshire written right through him like a sturdy stick of Barnsley rock, who, in his sixties, lives just 600 Yorkshire yards from where he grew up, Ian McMillan can still be found multi-tasking away, as ever, in a variety of places other poet-entertainers just don’t reach.

The barmy Bard of Barnsley – stand-up comic, writer, columnist, poet, librettist, playwright, broadcaster – may pop up anywhere on radio or TV, on Newsnight, for instance, or The Today Programme, regularly presenting The Verb on Radio 3 or requesting ‘Donald, Where’s Ya Troosers?’ on Desert Island Discs. But he’s just as likely to be raising laughs and stimulating creative juices out in the community, performing verbal acrobatics and lunacy with school, choir, theatre and arts’ groups or as unlikely poet in residence for Humberside Police, English National Opera, Barnsley FC or a train line. Whatever the project, it’s the sharing of fun, laughter, silliness and the sheer joy of playing about with language, rhyme and rhythm that always come to the fore. In recent years, Ian’s trademark buoyancy, enthusiasm and treacle-rich Yorkshire accent have been bounced into projects for dementia/carer groups. He tells me he has no personal experience of the condition in friends or family but does have a particular interest in this work.

One such project is Exeter University’s long-term research study, IDEAL (Improving the experience of Dementia and Enhancing Active Life). Now halfway through its eight years, this examines the benefits of bringing creative arts to dementia/carer groups and hopes to reveal to what extent song, music, poetry, craft and artwork might promote ongoing positivity and improve quality of life for both carers and those cared for. IDEAL 2 is also to include studies with minority groups and those with more severe dementia. 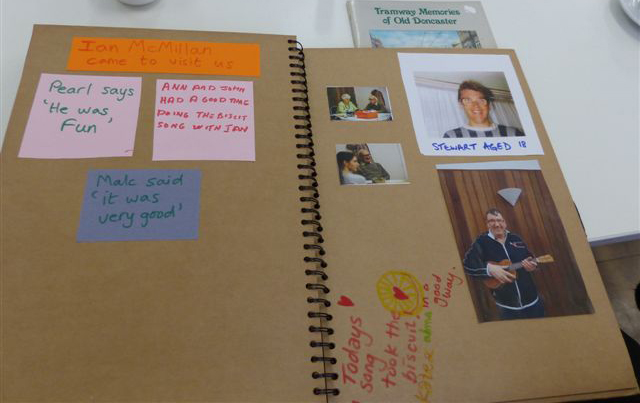 In a series of workshops in Exeter, photographer Ian Beesley and cartoonist Tony Husband joined Ian McMillan in collaborating with the Budding Friends gardening group on The Allotment of Time project, while in Oldham the three worked with the Ragamuffins on A Life More Ordinary. In a relaxed atmosphere of tea, cake, chat, laughter, flying words and arty inspirations, a chapbook and exhibition were created with each group, compiling comment, narrative, poems, cartoons and photographs that should help further greater understanding and insight into the thoughts, hopes and experiences of people in this situation in life. Designing a banner is Mr McMillan’s next project with the Oldham group, to promote easier access to public transport. It follows a moving banner created with the miners of Kellingley, the last pit to close.

For those living with dementia and carers alike, the loss of social interaction can lead to suffocating isolation, claustrophobia and inaction that serve only to heighten frustrations and anxiety and put relationships under great strain. Participation, regardless of ability, has positive effects mentally, socially and physically, be it in gardening or indoor activities. That music can reduce stress is well known, while the predictability of rhythm and rhyme can be wonderfully soothing. It’s also true that, even when struggling with speech, those with dementia generally retain longer the ability to sing, play and/or enjoy music, which brings both delight and release. For all of us music also unlocks memories and emotions, and kick-starts thoughts.

At meetings nationwide, such as the Alzheimer’s Society Singing For The Brain, a fine time is had singing through well-loved songs, thereby boosting levels of engagement, communication and well-being. But projects like IDEAL and DEEP (Dementia Engagement and Empowerment Project) go a step further in their work towards changing and improving services and policies that affect the lives of dementia/carer combinations. Instead of purely reminiscing and looking back, participants are also encouraged to be proactive and inventive, to take on the purposeful challenge of sharing in the creation of something new, unique and ongoing, be it poem, song or artwork. 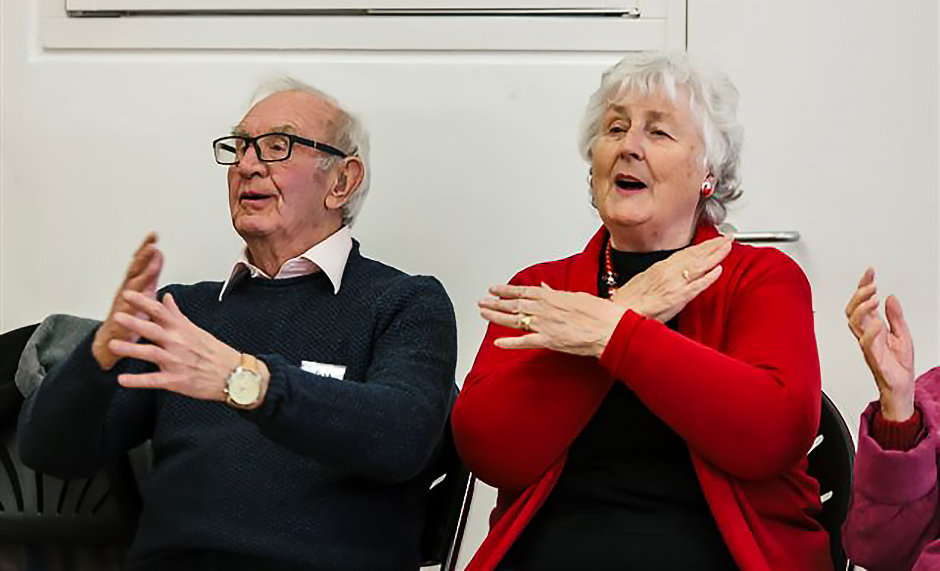 In Doncaster, Ian McMillan is working with Singing For Memory, a group led by musician artist Janet Wood, whose own approach likewise embraces a pooled input of words, music and simple actions in inventing new songs. On this project, as Ian stimulates the creative flow of words, Janet helps guide the music. Both Janet and Ian are keen to stress, though, that it’s not the end product, the poem or song, that takes top priority. What matters most is the sharing of fun, laughter, delight surprise and the satisfaction of achievement that all spill out during each session from the process of communal creativity. It’s all about having a go and joining in.

Now, it’s true Ian McMillan’s nowhere near earning his proficiency badge in flip-chart skills yet, but that doesn’t matter. It just adds to the hilarity. As his energetic optimism dances and clowns about the room, maximising laughter, his big pen (sort of) jots down contributions from all and sundry as he encourages everyone to savour the deliciousness of someone’s interesting word, quirky turn of phrase, catchy rhythm, silly rhyme or putrid pun. Ideas may fly off at tangents, words not quite fit, similes and metaphors splat like fried eggs and mashed potato in a food fight, but that doesn’t matter, either. Let’s try and work them in, because, in the end, they may just help create something all the more unexpectedly delightful (or not!) Every contribution is welcome, even – nay, especially! – aspidistras and wonky donkeys. Later, Ian can further tweak words and form, Janet embellish the music. If the new creation’s a hit, into the repertoire it goes. 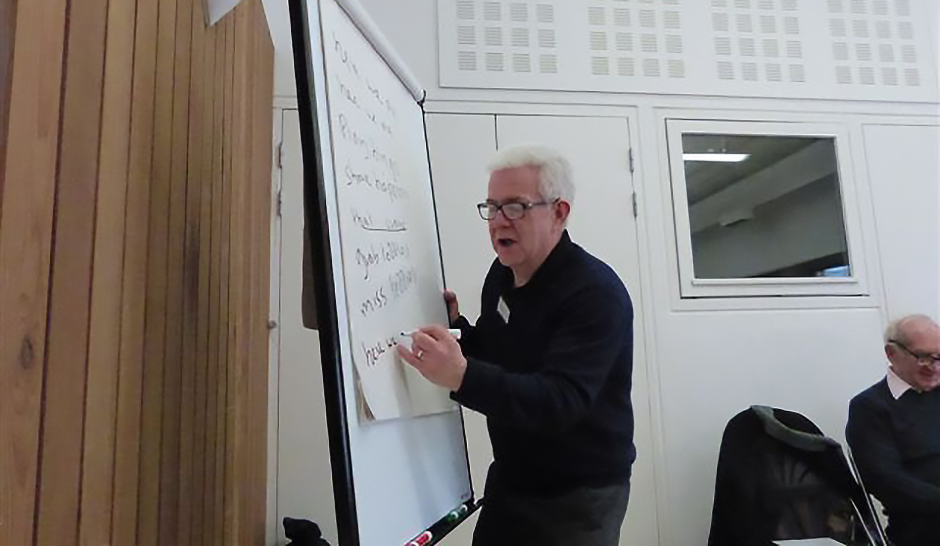 The fortnightly meetings, run by darts (Doncaster Community Arts) and helped erratically by frantic fundraising and grant-seeking, start and end with chats and a relaxed mingling over tea and biscuits, an essential time for sharing experiences, pooling ideas and coping strategies, talking over problems and allowing carers a bit of down time in an atmosphere of friendship and understanding. It’s all about promoting confidence, self-esteem and well-being. Folk can browse the scrapbook, too. Added to each week, this forges a sense of belonging and ongoing participation, incorporating artwork, photos old and new, and snippets and comments that arise from sessions or from the talents and interests of individuals.

During spontaneous outpourings, magic moments crop up all the time say Janet and Ian. One came for Janet – and the whole group – when Malc launched unexpectedly into song, suddenly finding not just his voice but also The Lost Chord– twice. For Ian, it was pure magic when a chap put into song phone numbers he couldn’t otherwise remember, then again when Dorothy threw out a catchy line that sparked off an entire, delightful, universally loved song, The Biscuit Song, that shows even potentially sad and sorry circumstances can turn into fun and hilarity!

They forgot all about me!
I never even got a seat to sit on
– And risk it.

Local Memory Cafes and Dementia Cafes are springing up all over now while many care homes, churches, and local arts’ groups like this one, arrange get-togethers of their own. Some incorporate music or other activities, others just provide companionship, conversation and support. The Alzheimer Society has its Singing For the Brain sessions, and The Salvation Army has recently launched its own song and hymn-singing meetings, Singing By Heart. It’s quite likely there’s something in your area or will be soon.

As with any group and any activity, some members will, inevitably, enjoy themselves more than others, but, whatever the final findings and recommendations of the IDEAL study, it’s clear already that taking part in stimulating creative projects can help life continue to be fun, worthwhile, and forward-looking for those living well with dementia.