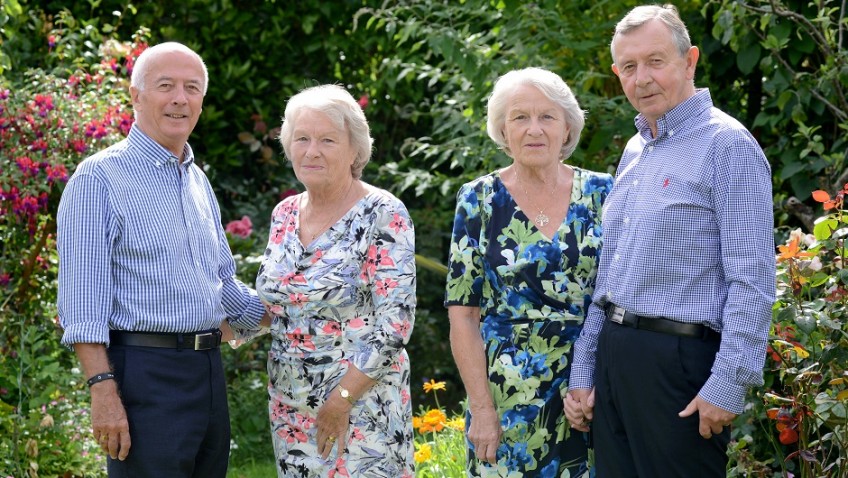 Twin sisters who got married in a double ceremony and went on honeymoon together are now BOTH celebrating their golden wedding.

Inseparable Anne and Margaret King were 21 when they were wed side by side on July 23, 1966.

Margaret married Allen Natkaniec and Anne became the wife of Allan Carwardine and their father, former Lord Mayor Ron King, gave them both away.

The two newly wed couples honeymooned together in Italy where they saw England win the World Cup on TV.

Now 71, the twins and their husbands still live within metres of each other on the same road in Plympton, Devon. Collect of Allen and Margaret Natkaniec and Anne and Allan Carwardine on their wedding day on July 23, 1966 in Plymouth, Devon.

Although retired, they both shared similar careers retail trade before becoming housekeepers at a local convent.

They have now shared another milestone together by both clocking up 50 years of happy marriage.

The foursome celebrated with a stay at the Celtic Manor Hotel in Wales and plan a three-week holiday in Australia last this year.

Margaret said: “We are very close and always go away on holiday together. Our husbands get on very well and our children were all brought up together.

“We just got engaged at a similar time and decided to get married it was go close together we might as well get a double wedding.

“We have always just been so close. We even went on honeymoon to Italy together – and are still holidaying together today.”

Speaking of celebrating their golden wedding together, she added: “It is very special – marriage is something that has to be worked on – and we have had many happy years together – it has been fantastic.

“It is really great to share the celebrations as twins.”

Margaret has a daughter Clare, 43, and two grandsons Benjamin, 17 and Alexander, 14.

Anne said they had enjoyed a great life with her husband Allan, 71.

She added: “We have spent many happy times with family and friends and have been lucky enough to have travelled to some wonderful places around the world.”