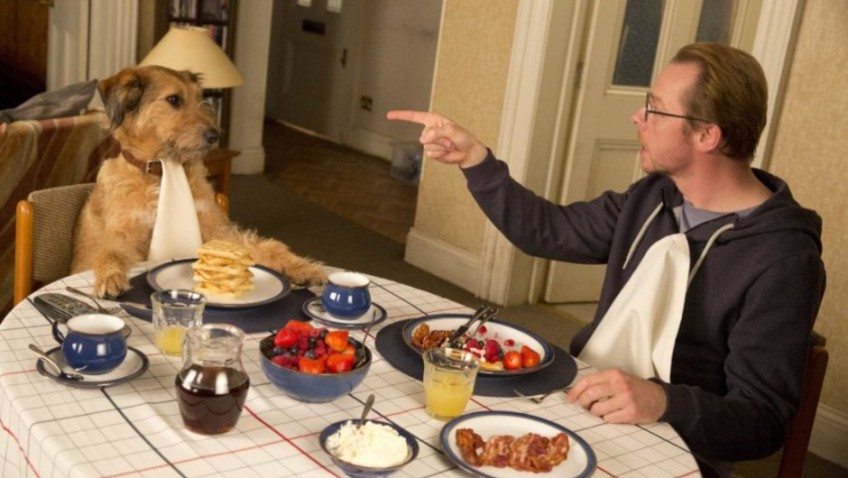 A dog’s dinner of squandered talent and potential

The issue with Absolutely Anything, the unlikely collaboration of director, author, performer, animator, musician, scriptwriter and former Python Terry Jones, 73, and his co-writer Gavin Scott (The Borrowers), 65, is how they could have delivered this contender for worst film of the year.

The high concept premise gives the creators a blank canvas for imaginative visuals and hilarious comedy that they squander totally. Basing their film loosely on an H.G. Wells Sci-Fi story and the 1974 NASA launch of the Pioneer mission, the Intergalactic Council of Superior Beings (a potentially hilarious gathering of grotesque aliens, voiced by Michael Palin, Terry Jones, Terry Gilliam, John Cleese and Eric Idle), has intercepted the Pioneer probe.

The aliens have been observing planet earth and find it wanting. Before eliminating it, they decide to give mankind a chance for redemption. One earth being will be chosen at random and endowed with unlimited powers to contribute to the good of mankind and to the galaxy.

Meanwhile, we meet disillusioned school teacher Neil Clarke who works in a failing secondary school and lives alone with his dog Dennis in a tasteless flat. Neil tries to avoid grumpy neighbour Fiona (Meera Syal) who bangs on his door to remind him that dogs are prohibited in the lease, but makes every effort to bump into his pretty neighbour Catherine (Kate Beckinsale). One day Neil discovers that he can make wishes come true and naturally experiments with his powers.  We expect the film to exceed our imaginations with his wishes and their consequences, but instead we get a tedious series of commands that are so mundane and self-absorbed that we have to wonder whether Clarke could possibly be a teacher. He never even bothers to investigate the origin of his gifts and takes them for granted.

We are left to wonder why Clarke does not retain the GQ body he wishes for when he hopes to pull Catherine and we are supposed to laugh when he enables Dennis to talk. Far from humorous, the voice of the late Robin Williams seems pitiful here, particularly as Dennis is about as likeable a talking animal as Ted and even less funny.

In H.G. Wells’ The Man Who Could Work Miracles, the protagonist starts out with small wishes, but he becomes inspired to reform the world by curing illness, improving public works and the like. Not so with Clarke who wishes for inconsequential little things and quietly uses his powers to win Catherine and help his fellow-teacher (Sanjeev Bhaskar) win a colleague who has no interest in him. There is an equally tedious segment involving Catherine’s former boyfriend, Grant (Rob Riggle) who is stalking her.

As far as lead actor Simon Pegg is concerned, no one will spend much time musing over which was worse, last year’s Hector and the Search for Happiness or Absolutely Anything, but one might start asking when they last saw Pegg make anybody laugh.

A moral of the story – be careful what you wish for – is a good one, so just remember not to wish for a ticket to see Absolutely Anything. It really is just that: a dog’s dinner that not even Dennis would go for.