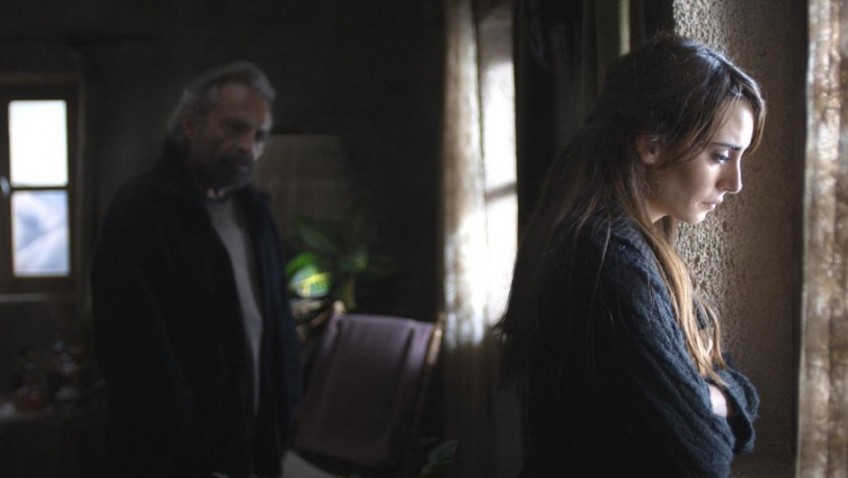 Documentary of a wintery mountain fortress

In the end credits to Nuri Bilge Ceylan’s new film, Winter Sleep, he thanks Anton Chekhov, something that his main character in the film, Mr Aydin (the superb Haluk Bilginer), might do in the book he has been putting off completing for years: A History of the Turkish Theatre.

While Aydin, a former actor, might be a bit of an intellectual snob, Ceylan is apparently acknowledging a genuine dept to Chekhov. He claims Winter Sleep was ‘inspired’ by three of Chekhov’s short stories but there are nods to the plays, to Dostoyevsky, Shakespeare and more.

References to Chekhov’s plays are particularly notable in Once Upon a Time in Anatolia; Ceylan’s previous, and only slightly shorter, epic which won the Grand Prix (the 2nd prize) at the Cannes Film Festival in 2011.  Winter Sleep, which is also set in Anatolia, did one better and won the Palme D’Or at this year’s festival.

The film is 196 minutes with almost no action as we know it. Do not let this put you off.  You are about to experience what happens to people who have shut themselves away for a metaphorical winter, and have, imperceptibly, shut out love.

Ceylan’s characters are flawed, but you cannot but be drawn to them as they are deeply human.

The more they interact, the more we can identify with their posturing, delusions, control mechanisms, defences and vulnerability; as well as with their desire for love, but inability to reach out to one another.

The action which begins the film comes when Ilyas (Emirhan Doruktutan), the son of a tenant of Mr Aydin (Bilginer), throws a stone at Aydin’s four-wheel drive, being driven by his chauffeur and property manager, Hidayet (Ayberk Pekcan).  As Hidayet gives chase, Ilyas slips in an icy puddle.

The two adults drive the boy home so he does catch cold.  But Ilyas’s proud, hot-tempered father, Ismail (Nejat Isler), does not interpret this intervention as concern for his son. He thinks they want reparation. Ismail slaps his son hard and then punches his fist through the front window of his hovel: a window for a window.

Aydin is as disgusted with this action as he is with the mess around the property.  Later, Aydin will write about this issue in his column in a small regional paper, The Voice of the Steppes, asking ask why poor people cannot be tidy, since it costs so little.

We learn that Ismail cannot find a job after a stint in jail and now drinks. Although his brother Hamdi (Serhat Mustafa Kilic) works hard, Ismail owes arrears on the small house carved into the rocks, which he shares with his wife, mother and Hamdi.  Ilyas, Hamdi explains, threw the rock in retaliation for his father’s humiliation.

Baliffs who came to remove the family television and furniture overpowered Ismail when he resisted them.  Unlike Ismail, Hamdi’s approach is to be reasonable, obliging, calm and sycophantic, but it does get him far with Mr Aydin.

Hamdi pays a visit to Aydin to offer to pay for the window.  When he learns the cost, however, he is stunned and realises he cannot make good his offer.  Aydin offers Hamdi tea, biscuits and slippers (albeit, humiliatingly, women’s slippers) for the cold floor. The fire offers temporary warmth, but no solace.  Aydin refers Hamdi to his lawyers and Hayadet for all future business matters.

The remainder of the film is dominated by a number of long conversations that gradually turn into searing attacks. These take place primarily within the confines of the Hotel Othello that Aydin owns with his recently divorced sister Necla (Demet Akbag).

Necla, Aydin and his beautiful young wife, Nihal (Melisa Sözen), live in the hotel in Anatolia’s mountainous Cappadocia region. They keep it open in the winter because the area, a UNESCO World Heritage site, attracts a few intrepid tourists. For Aydin these young, international adventurers are a conduit to the outside world – and to his own former life with dreams and aspirations – that he has all but abandoned.

The tension that builds from these conversations is fierce; but these battle scenes are bathed in a gorgeous light, with shots resembling paintings by the old masters.  It becomes clear that no one likes Aydin very much and Ceylan offers him no succour.

Aydin watches empty-handed as Hidayet struggles under the weight of his luggage.  And when, with a patronising laugh, Aydin pokes holes in Nihal’s attempts to be useful and fundraise for a local charity, we share her quiet rage.

After ensuring that Nihal is imprisoned within the hotel, Aydin sets free a wild Anatolian pony that he had paid a wrangler to capture for hotel guests (Cappadocia means ‘the land of fine horses’).  This family has turned hurting one another into a fine art.

Benjamin Disraeli wrote in Sybil that ‘Power has only one duty – to secure the social welfare of the People.  In Aydin’s world, there is only social unrest. Two hundred years later, the Sci-Fi writer Frank Herbert warned that ‘Power tends to isolate those who hold too much of it.’  Right up until the powerful final shot, the film is Aydin’s slow, painful journey into a subconsciously self-imposed isolationism.

His control over Nihal is based on his former celebrity and age, as well as on the difference between their education and wealth.  But  control is an unsustainable basis for love.  Nihal recognises her husband’s strengths, but tells him, ‘You sometimes use those virtues to suffocate people.’

Two epiphanies mark the final part of the film as Nihal and Aydin separate to take short side trips to a kind of self-discovery.   As in Chekhov, Necla, and then Aydin, talk about returning to the Istanbul (in plays such as The Three Sisters, it is Moscow).  For 25 years, Aydin was an actor, but, after inheriting his father’s property holdings, he withdrew from life, and reluctantly admits that, ‘there is nothing for me there any more.’  But is there anything for him left in the shelter of his mountain fortress?