Home / HEALTH / Doctor in the house 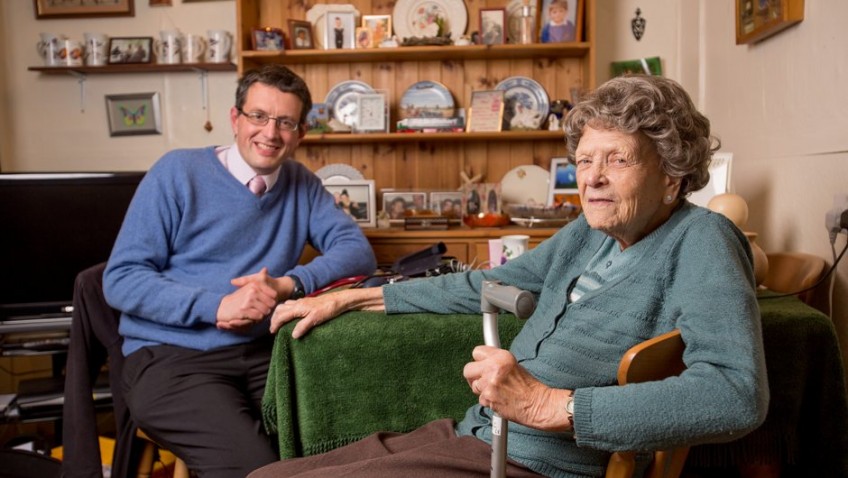 Doctor in the house

A pensioner in a remote village has kept her neighbours in good health for the last 26 years – by allowing the doctor’s clinic to be run from her LIVING ROOM.

Public-spirited Eileen Seal, 89, first offered the local GP the use of her cottage in 1988 when he complained about his cold and draughty practice.

Every Monday since, locals in Maiden Bradley in Wiltshire have popped round to the great-grandmother’s house for their weekly appointment with the visiting doctor.

Her front room acts as a reception area where Eileen sits and chats with patients before their consultations in the adjoining lounge.

The weekly sessions are advertised in the local newsletter but no appointments are necessary.

Some weeks Eileen’s front room is overrun by a succession of people wanting to see the doctor, who currently travels six miles from his full-time practice in Gillingham, Dorset.

On other weeks only a couple turn up – although Eileen herself is always assured of attention if she needs it.

But as she approaches her 90th birthday the unique arrangement is set to end as locals have clubbed together to pay for the community’s first proper surgery in the village hall.

Widow Eileen said: “My husband Robert died in 1987 after I nursed him at home for 11 years – I couldn’t let him go into hospital.

“He died in the October and in the January I felt a bit lost and I had to go and see my doctor.

“He was the new doctor for the village and they had let him have a cottage on the other side of the village.

“He was moaning the cottage was damp and dark and the rest of it and on the spur of the moment I said ‘why don’t you come to me?’

“He said ‘can I come and look at it?’. I said yes and he came round and said ‘yes, it looks much better but I must get permission from the practitioner’s committee’.

“They came to see me and he sat down in the armchair and said ‘I like this, I like this’.

The surgery – which takes place between 5pm and 6pm every Monday and is completely voluntary on Eileen’s part – is currently run by Dr Neil Harding.

Eileen explained: “You come into the first room and that’s the reception room.

“I sit in the reception room and chat to the people who come and I have the TV on too to give people in the next room a bit of privacy.

“The number of patients varies.  People don’t make appointments so it is first come first served.

“One recent Monday was flu jab week so there was about 14 people, but sometimes there is only one person.

“The main thing is people know it is always there – and also my family are quite happy because they know I am seeing a doctor regularly.”

She added: “I said I was happy to carry on until I was 90 in January and I didn’t know who would have taken it on. I am pleased it has a new home.

“I will miss the people when it goes but I will still see people around.”

Eileen, who has five grandchildren and four great grandchildren, trained as a secretary in London but moved to the village – population 300 – as a Land Girl during the war.

She has lived in her cottage since 1951 and it was her family home with husband Robert – who died of a brain tumour – and their three children.

In the new year the surgery will move to a store room in the village hall which has been converted at a cost of £6,500 raised through charity events and grants.

Mel Thomas, chairman of Maiden Bradley Memorial Hall, said: “It is about time the village provided something.

“If there is a gap, we might lose the service and we would hate that.”

Local county councillor Fleur de Rhé-Philipe said: “I  think what she has done is fantastic.  It is very nice to see the community working so well.

“I think people fear this kind of community doesn’t exist any more but it clearly does in more places than you might think. It’s wonderful.”

Eileen Seal’s house acts as the local CHEMIST as well as the doctor’s surgery every Monday night.

Dr Neil Harding, who has been holding his surgery at Eileen’s house for ten years, said: “Well, we are really appreciative of all the help and support Eileen gives to the practise and the village, and has done for all these years.

“It obviously does puts her out every single week, but I think throughout her life she has been a very community minded individual, and she has always wanted to help anywhere she could.

“We are extremely grateful and very appreciative.

“We are also dispensing medicines at the surgery – it is a sort of chemist too – with people coming in to pick up their month’s worth of medication.

“That gets a lot of traffic through Eileen’s door too.

“Eileen has always done this on a completely voluntary basis. It is just part of her community spirit.

“She is doing it for the community, not for any kind of reward.

“Obviously we thank her at Christmas with an appropriate gift, but she does this because she is completely selfless.”

Dr Harding said his visits would move to the village hall in the middle of January, when Eileen turns 90 and ‘retires’.

“I think people will miss it,” he said.

“We are pleased we are able to continue the personal medical care in the village that people enjoy.

“But I think it is going to lose some of the charisma of it.”

He said isn’t able to have a proper medical examination couch in Eileen’s house, but patients ‘could recline on the sofa if needed’ and he took people to his main surgery for more sensitive examinations.