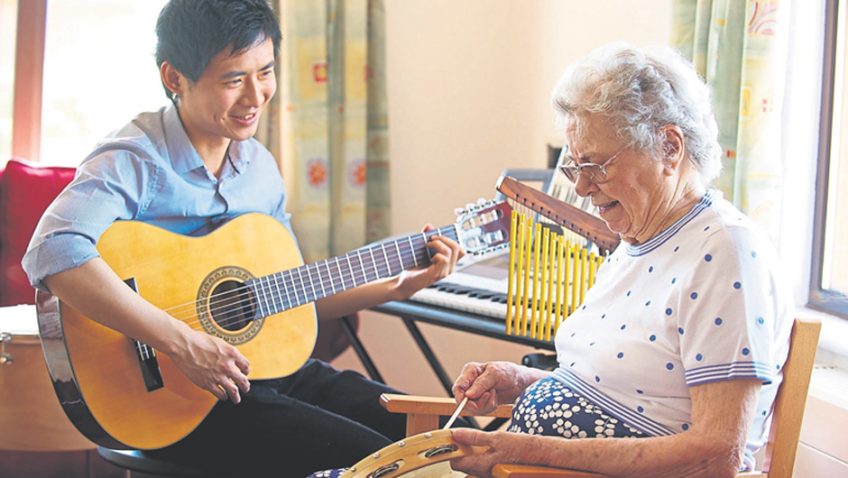 Music has always been a strong way to communicate in most cultures and recent news highlighting the connections with those who may struggle to make links with others, enforces the power of song.

The voice of the 10-year-old school girl with special needs, has delighted news and social media channels with her singing of Hallelujah and the success of Teddy Mac, the Songaminute Man who despite his dementia remembers all the words to the songs. He has made a bestselling record with profits going to the Alzheimer’s Society. Michael Dent, Director of Fundraising at the Society, said:

“Teddy is truly inspirational and we would like to congratulate him on his incredible chart success.

“There are currently 850,000 people living with dementia in the UK. Teddy’s story shows us that you can still achieve amazing things if you are living with the condition.

Music Therapy is clinically proven, helping both those living with the condition and the people around them to manage symptoms. Through using Therapy, therapists can regulate residents’ emotions to alleviate symptoms, and identify their possible causes. It works because music activates neurones in more regions of the brain than anything else scientists know of and research shows that despite deterioration of cognitive functioning, people with dementia retain the ability to appreciate and make music until the latter stages of the condition.

Due to people living longer and better diagnoses, dementia has now overtaken heart disease as the leading cause of death. Figures show that there are 850,000 people diagnosed with dementia in the UK today. However, just 0.12% of dementia sufferers in the UK are able to receive life enhancing Music Therapy.

MHA is one of the largest employers of music therapists specialising in dementia in the UK, with a team of 19.  It has been pioneering the treatment since 2008 and currently helps 450 residents a year who are living with dementia.

MHA’s Chief Executive Adrian Bagg added: “Music Therapy really makes a difference to people who are living with dementia. I have seen for myself the work of our Music Therapists and spoken to relatives and our staff to know the impact it makes. But we want to make sure all our residents living with dementia can benefit from music therapy, as well as those cared for by other organisations.

The BAMT works closely with those with communication problems – “For people living with dementia, music therapy engages healthy parts of the brain to address the primary and secondary effects of the condition, such as loss of confidence and self-worth, language deterioration, low mood and feelings of frustration, irritability and anxiety. “

“As human beings, music plays a fundamental role in our identity, culture, heritage and spiritual beliefs. It is a powerful medium which can affect us all deeply. Playing a musical instrument, being part of a choir or in a band, listening to music – these are all ways in which we can engage in music. They help us to connect with ourselves and others. Music can be exciting or calming, joyful or poignant. It can stir memories and powerfully resonate with our feelings, helping us to express them and communicate with others. There are many music projects available and aimed at people living with dementia. They are not music therapy but can offer people with dementia a great deal of enjoyment.“

Music therapists use music’s power to facilitate positive changes in emotional wellbeing and communication through the engagement in live musical interaction between client and therapist.” To contact the BAMT telephone  020 7837 6100 or go to www.bamt.org