Home / LIFESTYLE / REVIEWS > / THEATRE REVIEWS / The cut-throat musical thriller is back in the West End – but this time in a pie and mash shop! 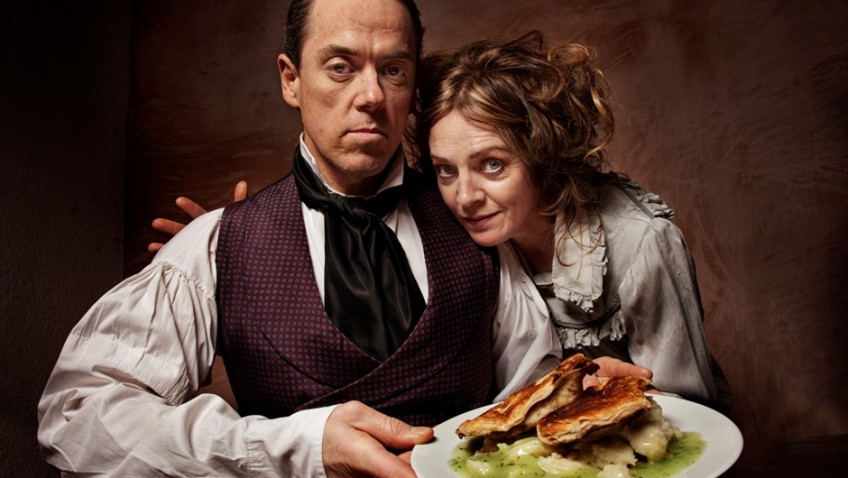 The cut-throat musical thriller is back in the West End – but this time in a pie and mash shop!

The Demon Barber of Fleet Street first appeared in a penny dreadful between 1846 and 1847; and even before the serialization was complete, George Dibdin Pitt had turned it into a “blood tub”: a Victorian term for a violent and sensational melodrama, easily the most popular form of entertainment in the 19th century.

The String of Pearls played at the Britannia Theatre, which could sit up to 5,000. Stephen Sondheim’s musical version was recently staged by Tooting Arts Club at Harrington’s Pie and Mash Shop in Tooting with room for an audience of just 32 people.

Cameron Mackintosh was so impressed with Bill Buckhurst’s atmospheric production that he has recreated Harrington’s on Shaftesbury Avenue (between the Gielgud and Queen’s Theatres) and upped the seating to 69. The audience sits at long tables onto which the cast regularly leaps.

The production, so site-specific, so up-close and so well acted and sung, is an extraordinary experience and quite unlike any other Sweeney Todd you may have seen; and there have been many Sweeney Todds in large and small theatres, in opera houses, in concert halls, on film, in promenade and even with the singers also playing the musical instruments

The chilling story-line is razor sharp. Todd (Jeremy Secomb) is a bitter and self-obsessed barber, who was sentenced to deportation on a trumped-up charge by a malevolent Judge (Duncan Smith), who drove his wife to madness and then stole his daughter. He takes a demented revenge.

His partner-in-crime is the manic Mrs Lovett (Siobhan McCarthy), who bakes the worst pies in London until she gets hold of human flesh, provided by Todd’s murder victims. She then becomes the most popular chef in town.

The story moves to a powerful close. The bodies pile up in the familiar Jacobean revenge manner and the finale plays like something out of Verdi’s Rigoletto.

The sophisticated score, musically and verbally dexterous, lyrical and dissonant, disturbing and romantic, has references to Rossini, Weill, Berg, and Stravinsky and ranges from the ballad poignancy to patter music hall vulgarity.