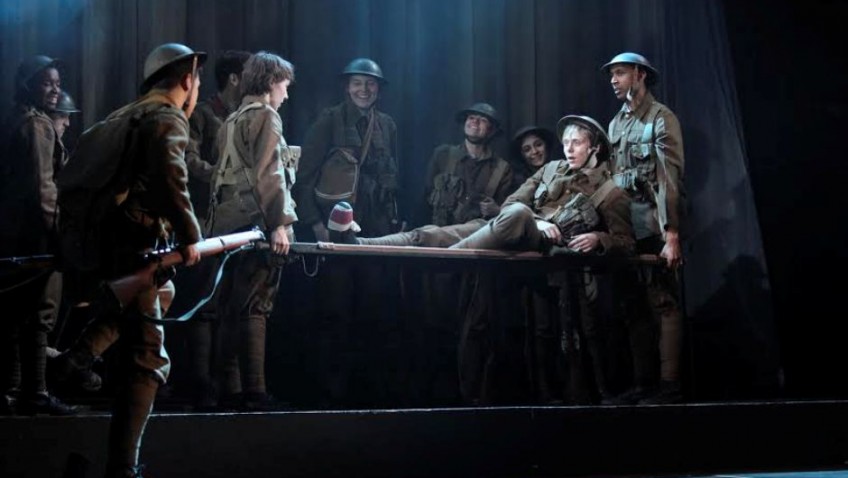 Cowardice in the face of the enemy during World War 1

The National Youth Theatre is at the Ambassadors Theatre with a season of three plays running in repertoire: Shakespeare’s Macbeth, Michael Morpurgo’s Private Peaceful and Selfie, a radical retelling of Oscar Wilde’s The Picture of Dorian Gary.

I saw two productions. Paul Hart’s production of Private Peaceful is the one to see and would be a good choice if you wanted to take a young teenager to the theatre and especially if they were studying World War 1 at school.

306 soldiers were court-martialled and shot for cowardice during World War 1; and they were not posthumously pardoned until 2006.

There have been films on the subject. The most notable are  Paths of Glory (1957) directed by Stanley Kubrick and starring Kirk Douglas and Adolphe Menjou and King and Country (1964) directed by Joseph Losey and starring Dirk Bogarde and Tom Courtenay, based on a play by John Wilson

Michael Morpurgo, the former children’s laureate, who wrote War Horse, tells the story of one such soldier, Private Peaceful, a country lad, from birth to childhood, to schooldays, to love and marriage, to battlefield and finally to court-martial and firing squad.

The novel, which was written after Morpurgo visited Ypres and published in 2003, has been turned into a one-man show, a film, and now an ensemble piece for the National Youth Theatre by Simon Reade.

Paul Hart’s highly physical production, extremely well lit, is particularly effective when it shows exactly what happened to Charlie Peaceful and how the charge of cowardice was false.  There is a fine performance by Fabian McCallum in the leading role.