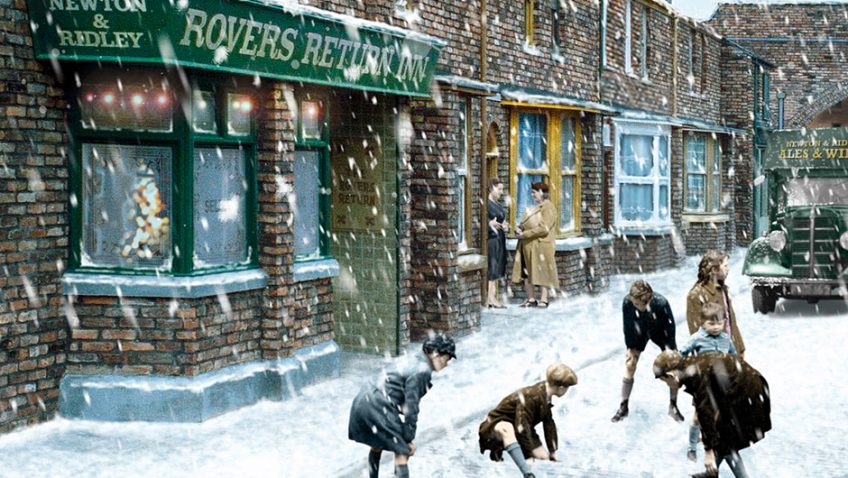 Win a copy of the new book.

In an exciting new partnership between publishers HarperCollins UK and ITV, this book heralds the start of an evergreen proposal. Christmas on Coronation Street

will be followed up with two more novels in 2018, the first to coincide with Mother’s Day.

They’ll be creating innovative new stories from Coronation Street’s rich heritage that will draw on the existing fan-base and recruit a whole new audience.

Elsie Tanner, Annie Walker and Rita Fairclough were the iconic matriarchs at the heart of the early decades of Coronation Street. They are creating a brand-new series of novels that revisit and reimagine their early lives, breathing fresh energy into these much-loved and fondly remembered characters.

The UK’s longest-running television soap, Coronation Street focuses on the everyday lives of working class people in Manchester, England. First aired in 1960 and created by Tony Warren, it has become part of the life of millions of viewers and the cast have become part of our national culture. Some storylines have created national outrage and raised questions in Parliament, for example, when Diedre Rashid was sent to prison.

Other memorable moments include the love triangle between Ken, Diedre and Mike, Elsie and Ena brawling in the street with the fight being broken up by Leonard Swindley and, more recently, the collapse of the jacuzzi containing Les and Cilla. One of the most moving and poignant episodes was when Stan died and Hilda said her goodbye.

For over 57 years we have watched the characters come and go and there are few who have not watched the soap at some time in their lives.

Going back to just before the Second World War, the book opens with a very young Elsie living in abject poverty and meeting up with some of the early characters.

Elsie Grimshaw lives in one of the worst streets in Weatherfield and is desperate to escape from life at home with a brutal father and the drudgery of working at the local mill. Grabbing at the slim chances that come her way, Elsie marries bad boy Arnold Tanner when she is just sixteen years old.

Going under her married name of Elsie Tanner, she and Arnold move in to No.11 Coronation Street in 1939, just as war breaks out. Her cheeky self-confidence immediately puts her at loggerheads with local busy-body Ena Sharples, and landlady of the Rovers Return, Annie Walker.

As Christmas approaches, the residents of Coronation Street must put their petty squabbles aside if they are to survive the worst that Hitler’s Luftwaffe can throw at them. And as the Manchester Blitz grips their home town of Weatherfield, the residents must pull together to make this a Christmas to remember – for all the right reasons…

The first book, written by Maggie Sullivan, is published on 16th November and we have five copies to give away. Go to our competition page to be in with a chance.