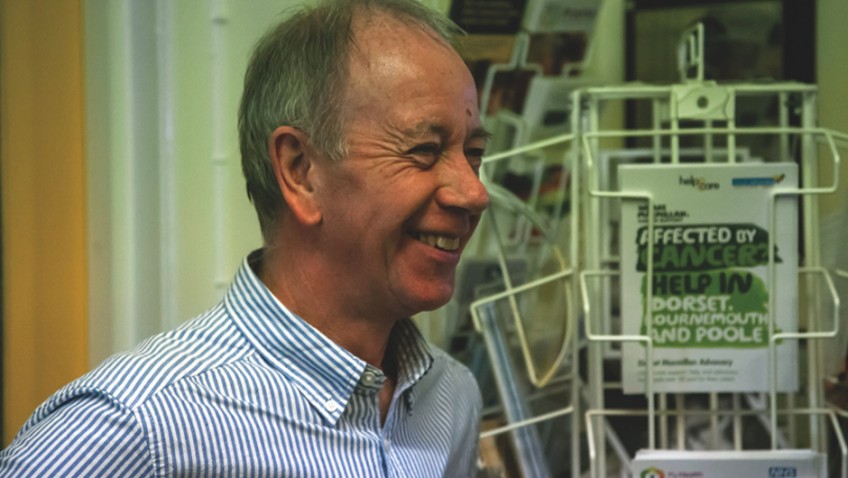 Brian is very intelligent, friendly and outgoing with a great sense of humour. He can no longer drive and is in constant pain of varying levels and physically weak. He lives alone in a small communal block of flats and when I first met him had extremely low self-esteem.

Although previously very well-travelled and active he felt that he had few future prospects of a happy life. He found his condition very hard to accept and suffered bouts of depression and often became upset when speaking about his situation.

The diagnosis of cancer was incredibly difficult for him to come to terms with. Even though in remission when I met him, it was still hard to bear. He still has a few good friends but is no longer independent so cannot socialise as much as he would like. He spends most of his time in his flat watching TV.

Brian’s cancer is now inactive and in remission for 2 years. He has regular appointments with his consultant and GP, both of whom he has a great deal of respect for. He speaks very highly of his current medical professionals. A variety of pain relief drugs have been tried and the latest drugs give relief for 12 hours each day as a maximum dose.

Sometimes Brian becomes confused and forgetful. He has sometimes taken the wrong drugs, or has forgotten to take them leading to potentially very serious problems. These have included passing out and hallucinations. I was present at one of these events. I’ve spoken to his nurses, doctors and consultants for his safety when he has taken incorrect medication.

Brian always speaks openly and honestly to me and we have a very good relationship. He knows that I understand him, will help him where ever I can and that I will never impose my views on him. We explore options to overcome problems or achieve things he wants to do. He loves to have a laugh and a joke too and not always to be reminded of the negative side of his situation.

I’ve arranged a bus pass, trials of motorised scooters, membership of the Myeloma Support Group and taken him to a meeting to introduce him. Whatever information Brian needs I source and provide it. Brian’s image of himself is now far more positive. He smiles more and we laugh and joke more than he used to. He has started to socialise more and is keener to “improve his lot” and not just accept his current situation.

We have made a “bucket list”. I will help him achieve the things he wants to on it, and help him make a list for next year too. Brian says he looks forward to our visits and really values them. He didn’t regularly contact his friends but now has an item on his bucket list to do this fortnightly. Several items on his bucket list show a massive improvement in his outlook. He will question his pain relief regimen himself now to gain improvements and changes. When I met him at first he said “I am no longer any use to anyone.” Now he says he looks forward to me visiting and having talks with me and he feels more positive about himself and he’s happy with his “bucket list”.

N.B. Brian is not his real name.

So what is a volunteer peer advocate?

Older people in the main are unconcerned about definitions, and when faced with cancer they simply need some support. Peer advocates are people aged 50 or over who have themselves been touched by cancer. They are recruited, trained and supported to walk side by side, every step of the way, providing whatever support the older person they’re partnered with needs. They aim to be the ‘voice’ of the older person, are non-judgemental and make sure those they support are heard and their views and opinions are acted upon.

Cancer can touch every aspect of our lives. Some issues are resolved easily such as access to benefits or transport arrangements others are complex, take much more time, have several components and require considerable input from our dedicated team of volunteers.