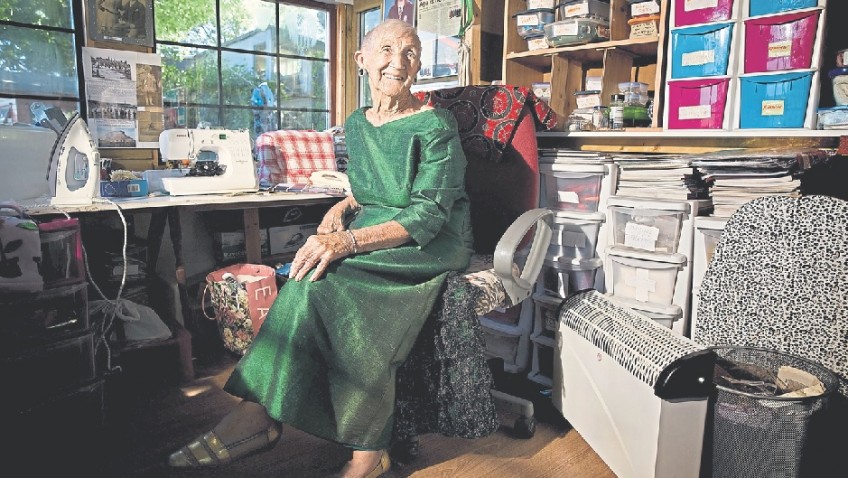 Britain’s oldest fashion designer has vowed to continue creating frocks – despite turning 101. Determined Jessie Power celebrated her birthday last week but still runs her own fashion label. The great, great-grandmother says she knew she wanted to become a dressmaker at the age of 15 when she left school. And she is still creating her own designs under her brand ‘Miss Neno’ 86 years later.

Her brand carries her mother’s maiden name and, having recently purchased a new sewing machine, Jessie is not planning on stopping.

Jessie, from Reskadinnick, Cornwall, said: “I always wanted to be a dressmaker. “I left school when I was 15 and I went to work in St. Ives with the Crysede silk factory, where I did my apprenticeship for four years.”

She then went on to become a lady’s maid and dressmaker in Dorset, where she met her first husband, Frederick Wallis. Sadly, Frederick passed away but Jessie went on to meet John Power and she remarried at 24-years-old, and moved back to Cornwall with him.

During her colourful career as a dressmaker, Jessie helped out with the clothing for the Royal Shakespeare Company in the 1990s when they came down to Cornwall. She even got to dress Sir Ian McKellen.

“He took all his clothes off and I had to dress him,” said Jessie. “I said to him ‘don’t worry, I’ve seen it all before Ian’.”

after her long career as a dress-maker under her label making frocks and wedding gowns saw an advert for her local college saying ‘age is no barrier’ which prompted her to go back to college. She then completed a fashion design degree – making her one of the oldest graduates in the country.

She said: “I finished my fashion design degree aged 87 and even one of the people in the university who taught me had no idea how to sew – so I had to show them.

Student of the year

She says her secret to living for so long is to “trust each other and be happy – that’s the only thing you can do.”

“If you put your mind to something you will get it.”

In addition to her fashion success, Jessie has also been a competitive swimmer. she said: “I won the championship of Cornwall twice – once before I was married and once when I was married and had my son, I never won that in the swimming pools, but in the open sea.”