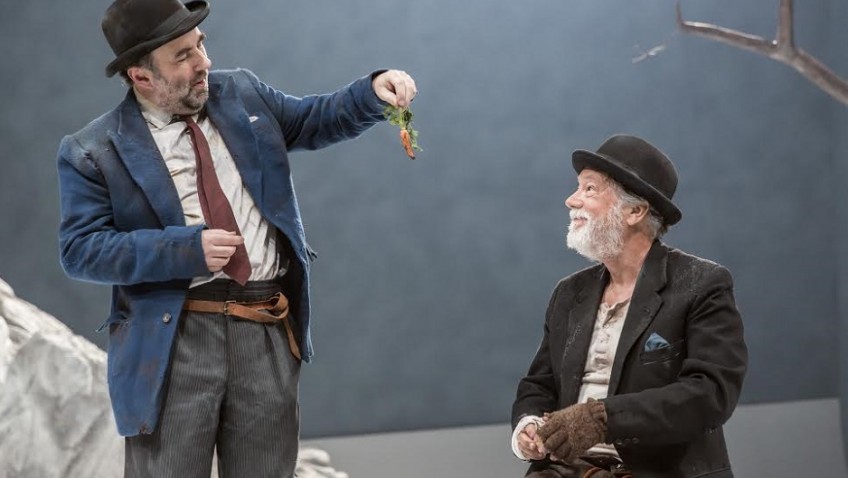 A brilliant, funny encouragement of hope for tomorrow in Waiting for Godot

Considering this is, some say, a play in which nothing happens – twice, Waiting for Godot is always riveting – even if you’ve watched that same nothing happen twice countless times before.

Originally written in French in 1948 after the war (when he served in the Resistance), Sam Beckett’s avant-garde masterpiece premiered in 1953 in Paris and was translated into English by Beckett himself, who won the Nobel Prize for Literature in 1969. Dialogue, characters and ‘plot’ are simple, bizarre and delightfully amusing, but provoke to this day never-ending theories and discussion over what thoughts and philosophies might (or might not) lie behind the words. This production is wonderful, the cast bringing an exciting, engaging sparkle of reality to the characters that more stylised deliveries do not, while the brutal, more pessimistic aspects of the play are softened by the warmer, sunnier moments.

Simon Daw’s simple set is stark, surreal and beautiful. In harsh, bright light stand an uprooted skeletal tree, rocks, stones and a large boulder, that cast shadows as the sun goes down and the moon circles as day ends. A vast whiteness of flooring, conjuring up dry desert rather than bog, sweeps across the stage and curves into the blueness of the sky like a surreal, unfurled roll of lino (or the lining of a budgie’s cage.) We don’t know quite where we are. Such is life. Nothing to be done.

As the main black comedy double-act, Lorcan Cranitch and Jeff Rawle make a very pleasing, rather endearing, bowler-hatted couple. Vladimir (Didi), plagued by his sore bladder and Estragon (Gogo) by his sore feet, are clad, as tradition dictates, as tramps. Though they resent it, like Pozzo and Lucky, they’re totally interdependent. While Cranitch’s glorious Irish accent adds warmth, depth and sparkle to the Irish playwright’s piece, the flow and interplay of the two is captivating as they bicker and banter, and travel in frustrating, never-ending circles of routine, forgetfulness, inaction, repeated mistakes and repeated conversations while waiting for the elusive Godot and getting nowhere – though never fast. Such is life. Nothing to be done.

Tyrannical, sadistic bully Pozzo, played commandingly posh and plummy by Richard Cordery, is a large, rounded presence both physically and as a character who combines loud, imperious, abusive arrogance with creepily jovial tones when it suits his ends. At the noose end of his red rope Bob Goody is the unfortunate Lucky.

A pathetic, broken figure, skinny, gaunt, his long, off-white locks hanging ghost-like down his impossibly long, mournful face, he’s permanently bowed beneath the weight of the baggage he’s needlessly forced to carry. Such is life. Silent, scarcely alive, he remains faithful to the beck and call of his whip-wielding master, thinking only if asked to. The lengthy, verbose outpourings of his garbled ‘thinking’ soliloquy, along with his visual perfection, earn Goody special applause.

As the play progresses, thoughts spark in all directions. What is happiness? Do our ridiculously short human lives have any significance at all? What of religion, politics, tyranny, dreams, loneliness, relationships? What of existence itself? Is man truly helpless in the face of fickle fortune with no control over his destiny? Does he talk when he should act because it’s safer to do nothing? Do we ever learn? Is there a point to anything?

Whatever the play’s about makes no odds. It’s brilliant, it’s funny, and no matter how absurd, how depressing, how frustrating it all is, optimism and compassion shine through with hope for a better tomorrow.

Absurd though it may be, Waiting for Godot is a delightfully uplifting and exhilarating way to justify a couple of hours of our paltry existence at least.

The play runs until Feb 27th