Home / LIFESTYLE / REVIEWS > / FILM REVIEWS / This breezy, romcom has a worthy message but it tries too hard to hammer it home. 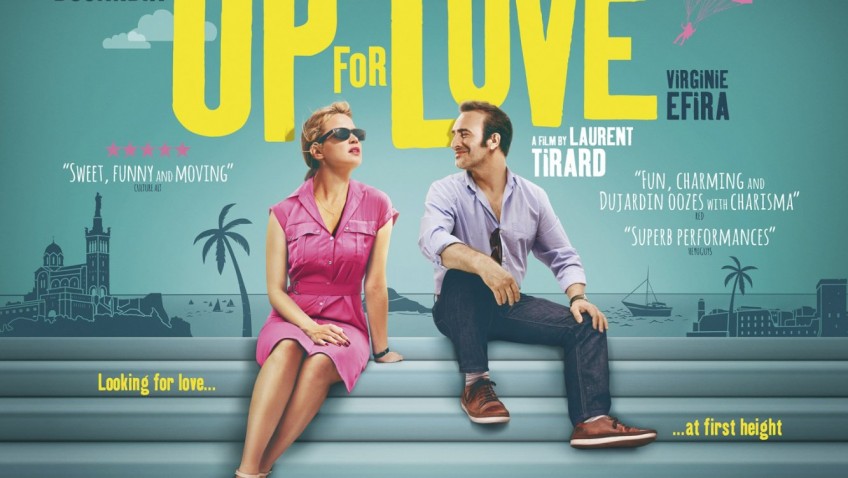 This breezy, romcom has a worthy message but it tries too hard to hammer it home.

Up for Love is a romantic comedy with a redeeming message about physical abnormalities is so main stream that only the French sub-titles (the film is in fact based on a 2013 Argentinean film) will position it in art house cinemas. If the film were really sincere about breaking new ground about physical abnormalities, however, it would not have cast the handsome, 1.82m tall Jean Dujardin (The Artist) as a wealthy, athletic, sensitive, brilliant architect with a tall, handsome son.  But then again, if you ignore exceptions like The Station Agent, it is difficult to a film funded any other way.

Talented lawyer Diane, a pretty blond with a great figure, might have been recently divorced, but she is otherwise a lucky woman.  There is an instant rapport with the charming stranger who calls on her landline to tell her that he has found her lost mobile phone.  Any initial wariness evaporates by the end of the conversation and she agrees to collect the phone over lunch.

Alexandre is handsome and dark, but at 4.5 feet (1.37m) even describing him as medium height (George Clooney and Dujardin are both 5.10) would be a gross exaggeration. The lunch turns awkward, but Alexandre is used to it. He not only puts Diane at ease, but convinces her to prolong the date. He has organised an after lunch surprise designed to impress any woman: he takes her skydiving.

Alexandre knows better than to give Diane time to talk herself out of the fact that she enjoys his company. Invited to a delicious dinner at his gorgeous home, Diane is also impressed by her host’s equally gorgeous, lanky son Benji (Cesar Domboy) who has nothing but praise for his dad.   This encounter not only reassures Diane that she will live in digs worthy of House Beautiful but that if they have children, they would turn out to be a normal height.

In subsequent dates Alexandre proves to be a killer ping-pong player, a smooth dancer and a man with his pulse on all the hot spots.  As for opera, he not only loves it, but is working on the Liege Opera House. He is also kind to animals and to the hired help, refusing to fire a fairly useless maid.   In short, writer/director Laurent Tirard and co-writer Gregoire Vigneron have isolated the only objection a woman could have: his height. If Diane has qualms, they are her problem, not his.

As the film continues to hammer home, what Diane fears most of all is the reaction of her friends, family and society, including her ex-husband Bruno (the talented writer/director/actor Cedric Kahn) with whom she still shares a law practice.  And her fears prove to me very real as everyone’s reaction to Alexandre is predictable. Will love survive such small minded prejudice, or is the real problem Diane herself?

Though most romcoms stay clear of disability, Up for Love cannot help but remind cinema-goers of the 2011 smash hit, Intouchables (Untouchable), which it closely resembles.  The charismatic black actor Omar Sy plays a hip, young black man from the housing projects who gets a job as a live-in carer for a rich, cultured quadriplegic named Philippe (the popular François Cluzet).  Philippe not only introduces his carer to opera and fine art, but even takes him paragliding.  Ironically, Dujardin’s performance in The Artist lost out to François Cluzet’s Philippe for the Best Actor award at France’s Césars in 2011.

You will not be bored by this breezy, entertaining romcom, or fail to admire the performance from Dujardin, who digs beneath Alexandre’s charm to reveal a man fed up with being stared at, judged and rejected for looking different.  But if the idea is to value a person for who he is and not what he looks like, the film makes it almost impossible for the characters – let alone the audience – to do so.  It’s not just the fact that the filmmakers opted for attention grabbing CGI over hiring a charming short actor who can act; it’s that the filmmakers never let us forget that the otherwise perfect Alexandre is height-challenged.

We are shown the irony of Diane’s small-minded parents when her father, who is nearly deaf, fails to recognise that as a disability. And yet, the filmmakers take us into panto-mode with a routine in which the big family dog keeps knocking Alexander over. A laboured shot of the two staring out the window, the dog bigger than his owner, is meant to put a smile on our face.  And while Alexandre’s matchless qualities as a person mean that Diane’s hesitation can only be his height, what about Alexandre?  Judging by his tall, handsome son, he likes to have a tall, striking woman on his arm; and judging by the way he obtained a first date and orchestrated the others, he is quite a manipulator if not a domineering personality.  Let’s not forget that Alexandre took a good look at the lovely Diane before he bothered to return the mobile phone in person.