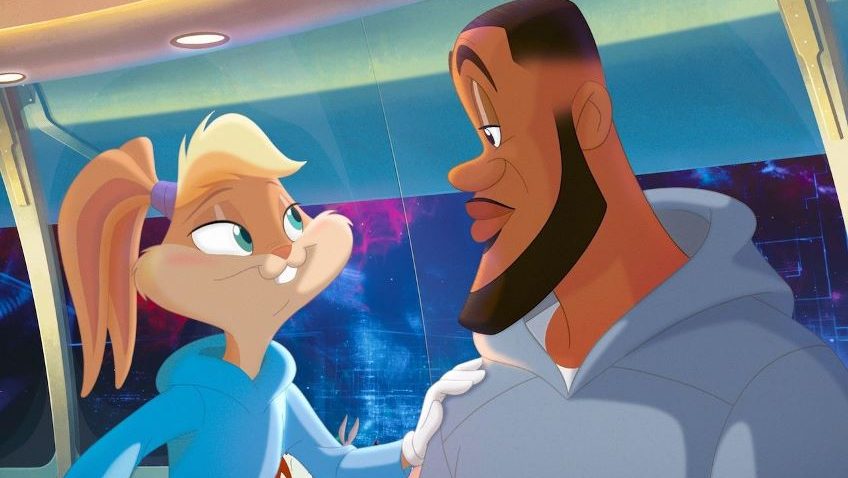 A quarter of a century ago the top basketball player in the world, Michael Jordan, appeared as himself in Space Jam, a high-octane, feature length advertisement for two American brands. One brand was Team Jordan for by then Jordan was a big brand. Spike Lee shot the phenomenally successful advertisements with Jordan for NIKE basketball trainers and, last year, a documentary was released about the darker side of Jordan’s shoe empire. The second brand was Warner Brothers’ Team Loony Tunes. To make this commercial fest even more American, in the film the two teams met in outer space for a competition to revive a failing amusement park. Clearly, the plot was not the thing.

The film made a lot of money, but you cannot find basketball icons willing to appear with Bugs Bunny every day and Jordan refused to return for a sequel. It took a quarter of a century to find Jordan’s equal, and so now, in this big summer of sports, Warner delivers a standalone sequel or loose remake: Space Jam: A New Legacy.

The director is the comedy director Malcolm D Lee (2017, Girls’ Trip), who happens to be Spike Lee’s cousin. The writers are plentiful, and while the film has nothing to do with outer space as we know it, the other two brands will propel this loud and rowdy bore to box office success.

For the star is LeBron James, who has arguably beaten Jordan to become the greatest NBA player in history. After several team changes (a joke in the film) he ended up with the Lakers and a reported billion-dollar net worth. Now at the end of his career and looking ahead, Space Jam: A New Legacy must be a lucrative post-basketball opportunity. As for Warner Brothers, The Tune Squad gets another workout, and so, as we shall see, do other greatest hits.

In the James’ mansion, the happy family has an issue to resolve. LeBron naturally assumes his thirteen-year-old son, Dominic (Cedric Joe) will follow in his famous dad’s footsteps or will at least be basketball mad. Not so. LeBron hasn’t noticed, but his wise wife (Sonequa Martin-Green) has, that the kid is a computer game whizz. While his dad assumes he will go to basketball camp, Dom, though eager to please his dad, has other dreams.

We have seen in a prologue, in Akron, Ohio, 1998, a young LeBron (Stephen Kankole), distracted, miss a shot on the school court. He gets a pep talk by a strict coach who instils in him the need to focus and give your all every day to succeed. Dom has this work ethic but has been applying it to programming computer games.

Meanwhile, inside Warner Brothers Serveverse (cyber space), its digital super brain, Al-G Rhythm (Don Cheadle) a flashy, gregarious, elasticated humanoid Algorithm is betting his all on a new idea he has pitched to Warner Brothers. It will, he trusts, take AI-G Rhythm out of the shadows and make him as famous as James.

The idea is to scan LeBron so that Warner Brothers’ digital animation team can insert him in all their franchises as a character. The digitalisation of actors is already happening, so this is not as far-fetched as it seems. The clever villain uses Dom to get to his father, but, at an embarrassing meeting on the Warner Lot, LeBron rejects the idea saying, ‘it’s not me’, adding that he can’t take time away from the game.

For the rest of the film AI-G Rhythm exacts his revenge on LeBron for denying him the recognition he deserves by revolutionising Warner Brothers’ technology.

The revengeful villain lures Dom into a matrix and, when LeBron follows, digitises them, separating father from son, and appealing to Dom through their shared interest in electronic games, while astutely playing on LeBron’s lack of understanding. The deal is that LeBron cannot have Dom back or escape from the server until he wins a heavily rigged basketball game. The rules will be made up by Umpire AI-G Rhythm. This is, believe it or not, the best part of the film as we are still admiring the integration of live action and CGI.

While AI-G Rhythm’s players, the Goon Squad, will be monster-ized scans of actual NBA and WBNA champions, LeBron must travel through the far reaches of the Warner archive into Loony Tune World to pick his squad. The villainous AI-G Rhythm has placed another hurdle in LeBron’s path. Loony Tune world is deserted except for Bugs Bunny. AI-G has sent the others away to explore new worlds. Here’s where the outer space appears in a very contrived set-up. LeBron and Bugs Bunny use Marvin the Martian’s spaceship to travel through DC Comics, The Matrix, Harry Potter, Game of Thrones and even Casablanca to find his players.

Is it funny? Maybe for the target age group or for James’ diehard fans. But there’s little real basketball and a lot of CGI in the actual game, which takes up half the film. Youngsters will not know that this space ship journey is a tour of the Warner best hits catalogue, but exposure is the first step on that journey.

Do we care that Ernie Johnson Jr and Lil Rey Howery play themselves as the news? There are arguably more cameos of celebrities appearing in the film than in Zoolander 2 – many gratuitous. As for Bill Murray playing golf with Bugs Bunny in the credits, most of the audience will either be too young to know he appeared in the original or will have forgotten the original film. Michael B. Jordan the actor appearing as a mix-up to save the Loony Tune’s Squad instead of Michael Jordan himself is the only genuinely funny cameo.

While we are hit over the head with the message that fathers have to let their children find their own way and do their own thing, when it is applied to the Loony Tunes Squad, whom LeBron has been training in his way of playing, the writers miss a trick. We never see how they can win by doing it their way, and here there could have been a battle between the old fashion animation and digitisation mixing, not just live action and CGI, but various methods of animation.

As for Dom, another trick is missed when we do not see him shine with his programming skills. You keep waiting for him to save his father and help everyone escape the Serveverse by programming something to thwart AI-G Rhythm’s plans, not with sport but with his brains.