A baker got tasked with a very prestigious challenge when she was asked to create a 99th birthday cake – for Dame Vera Lynn.

Dame Vera immortalised the south coast in ‘The White Cliffs of Dover’ and reminded thousands of troops of their beloved Blighty when they listened to Armed Forces Radio during the Second World War.

The singer, who is nine years older than the Queen and was a close friend of the Queen Mother, chose to mark the big occasion with a small gathering at her home in Ditchling, Kent.

And Baker Mia Taggart pulled out all the stops to create the perfect cake to mark the event and made an incredible white cliffs of Dover creation, complete with bluebirds, blue sea and relics from Dame Vera’s past.

She said: “Dame Vera is so strongly associated with the White Cliffs of Dover that once I had the image in my mind, nothing else would do.” 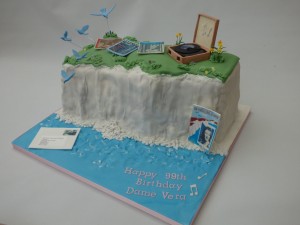 The talented baker specialises in creating one-off cake designs at her kitchen in Burgess Hill, and goes by the name The Little Cake Fairy.

She said: “Even though Dame Vera isn’t of my generation, of course, everyone knows her and it was just such a huge privilege to be asked to create a surprise cake for her birthday.

“For me, it’s one of the most memorable and it’s definitely the one my grandmother and mum are most proud of!”

The Dame Vera Lynn Children’s Charity in Billingshurst, Kent, for children with cerebral palsy was set up in 2001 when the national charity Scope announced that it would be unable to continue funding a nearby school.

Earlier this year, a ‘Vera 99’ appeal was launched to mark Dame Vera’s 99th birthday year, with the aim of raising £99,000 for her charity.

For the past 15 years Dame Vera’s Children’s Charity has supported more than 600 children with cerebral palsy and their families.