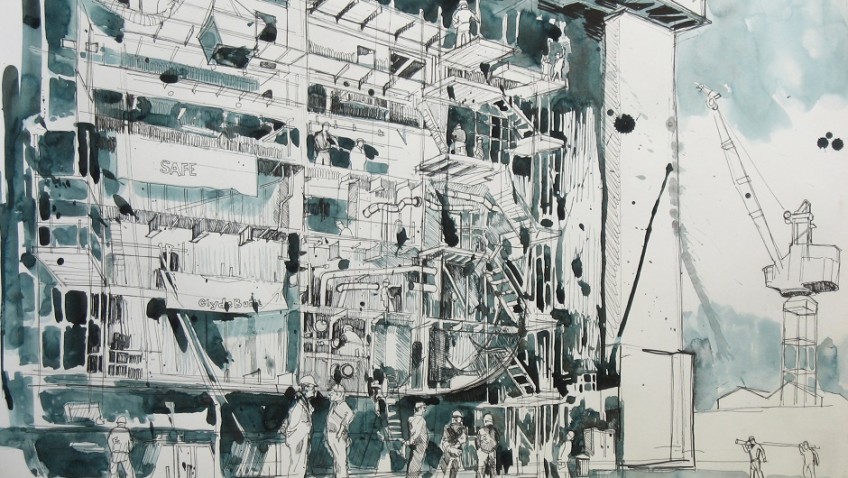 Lachlan Goudie has filled countless sketchbooks with the £6.9 billion vessel over the past five years.

The award-winning artist, famous for his still life and landscapes, has relished capturing the construction at Rosyth dockyard near Edinburgh. At 820ft long it can carry 36 F-35B Lightning II aircraft and up to four Merlin helicopters and is 13ft higher than Niagra Fall at 183ft from keel to masthead.

Mr Goudie said: “I grew up in Glasgow and have always been interested in ship-building.

“I like the challenge of creating a well-balanced, composed painting.

“A shipyard might be a brutal scene for some eyes but the scale and the awe captures me.

“You feel dwarfed by an object being built by hundreds – there is a towering sense of size.

“I like the interplay of the scaffolding and the confused, complicated inside of the ship with all the tubes – it’s like the boat’s intestines.

“There is no order – drawing chaos is exciting and can lead to some original images and unusual paintings.

“I get right under the ship – I’ve been lucky not to be scolded by any sparks from the welders.

“I really feel part of the process.

“The speed they build at is surprising – your subject matter changes dramatically by the day and that can be frustrating.

“I normally go once or twice a year – for about a week each time.

“A sketch can be as quick as 10 minutes, a painting can take between three and eight hours.

“I’ve done about 30 or 40 finished works and plan to use those to make larger paintings.”

A Ministry of Defence spokesman said: “HMS Queen Elizabeth will be the pride of the British navy for the next 50 years.”

The ship will travel up to 500 miles a day on missions from counter-terrorism to humanitarian aid and disaster relief.

Work on the aircraft carrier has created around 8,000 highly skilled jobs in the UK.

Mr Goudie, who read English at Cambridge University and studied at Camberwell College of Arts, has displayed work at the Mall Galleries in London and the Elizabeth Harris Gallery in New York among others.