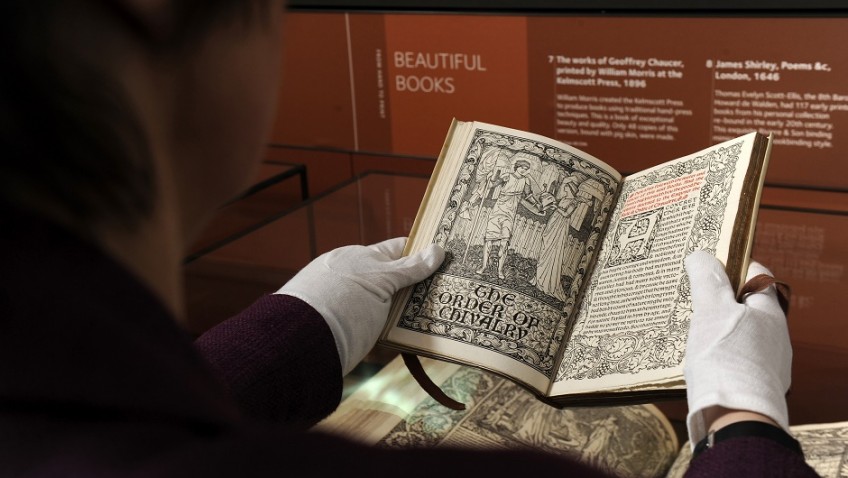 A university has created a new £1.9 million gallery to showcase its amazing collection of 200,000 rare books – including a copy of William Shakespeare’s 1623 first folio – which had previously been hidden on library shelves.

Among the treasures are a 4,500-year-old Babylonian clay tablet, the Nobel prize given to Russian writer Ivan Bunin in 1933 and a map and compass used by Bertie Ratcliffe, the first prisoner to escape back to Britain from Germany during WW1.

The books and manuscripts had been stacked on library shelves at the University of Leeds, West Yorks., but a new gallery has been created at the Brotherton Gallery to show off the gems.

University librarian and keeper of the Brotherton Collection, Dr Stella Butler, said: “This new gallery is allowing us to put a collection that has been hidden away in a far corner for too long open to the public.

“It is allowing us to shout about the treasures.”

Three exhibition spaces will provide space for a permanent exhibitions, community events and a temporary display space that will help bring to life important anniversaries and events.

The first will examine the role of conscientious objectors in the First World War, while later this year an exhibition will mark the 400th anniversary of the death of Shakespeare.

Much of the extraordinary catalogue of items comes from the University’s Brotherton Collection, which built on a library of rare books and manuscripts bequeathed by Lord Brotherton.

He was a Leeds industrialist who funded the building of Brotherton Library 80 years ago but his collection has never been publicly displayed before.