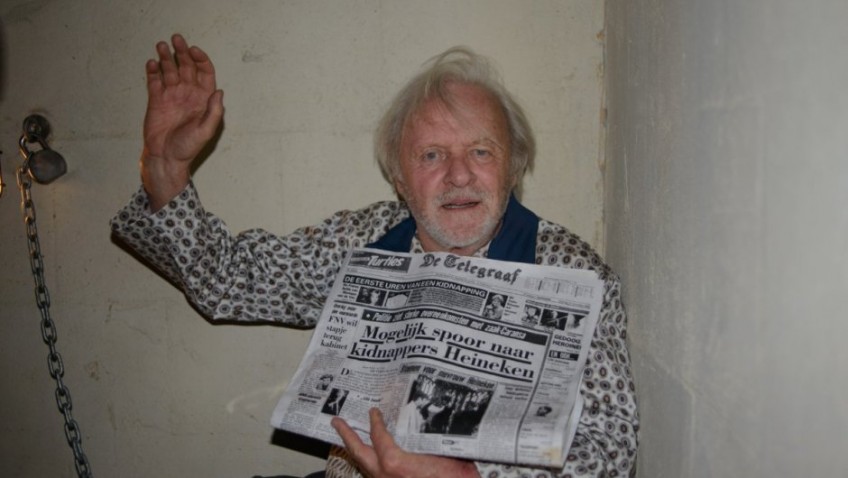 Anthony Hopkins stars in The Kidnapping of Freddy Heineken

One will never know why Hans Daniel Bjorn Alfredson, the competent Swedish Director of The Girl Who Played with Fire (the second of the Millennium Triology) and The Man on the Balcony, wanted to direct The Kidnapping of Freddy Heineken, a lacklustre British-Dutch co-production.  The involvement of Anthony Hopkins as Heineken, and Sam Worthington and Jim Sturgess as the lead kidnappers will not be enough to save this film from instant oblivion.  If only, you can’t help feeling, Hans Daniel had asked his younger brother Tomas, the inspired Director of Let the Right One In and Tinker tailor Soldier Spy, for some guidance!

The November 1983 kidnapping of the then 60-year-old Chairman of the Board of Heineken International, worth over 6 billion Dutch Guilders, and ransomed for 35 million Guilders (16 million Euros), was sensational only because of the victim and the large sum involved.  In terms of a kidnapping, it seems fairly routine. That is the main problem with making a film about the preparation, the deed and the collection of the ransom, without including the Heineken family and company’s reactions and actions. Once you’ve seen one kidnapping movie, you’ve seen them all, unless the victim, and/or the criminals, have character arcs to follow and are changed through their interaction with one another.

Aside from a few gruff demands and wisecracks from Heineken (his driver was also kidnapped), the young men learn nothing from the older man, one of the most experienced businessmen in Europe.  Filmed like a docu-drama, there is no dramatic license taken with the distant relationship between the criminals and their victim.

Hopkins acts like a wealthy business man who is frightened and bored, but too accustomed to giving orders and dealing with fools who want his money, to simply cower in the corner.  The rest of the British/Dutch cast recite their lines with varying degrees of conviction.  The whole thing lacks authenticity as, despite being a film about Dutch criminals, they speak to one another, and everyone else, in English.

The culprits were a band of five friends who, according to the film, were refused a bank loan for their construction company and planned the kidnapping as a result.  In order to carry out the kidnapping properly, which included renting a space in an Amsterdam business park and building a hidden, sound proof hut inside it,  they needed money, however, and robbed a bank. The film does not explain why the group were not satisfied with the proceeds from the robbery or why they did not continue with bank robbery after their initial success.

The script is adapted by William Brookfield from a book by Peter R. de Vries’ which is based on interviews with mastermind Cor van Hout (Jim Sturgess), and his accomplice Willem Holleeder (Sam Worthington). The problem is not only that the script is told from the point of view of these two seemingly unsympathetic, and uninteresting men, whom we never really get to know, but that it focuses on the tedious execution of the crime, rather than on the relatively more interesting and suspenseful aftermath.