Home / SLIDER / Lovers of the outdoors – read on!

Lovers of the outdoors – read on!

Dusseldorf in Germany; Mon Saint-Michel in France; Utrecht in the Netherlands; Leeds in West Yorkshire and Porto-Vecchio in Corsica. Add to this list Noirmoutier-en-I’lle in the Vendée region of France and then get your thinking caps on – what do all these places have in common?

Well, they are the last five places that hosted the Grand Depart of the Tour De France whilst Noirmoutier-en-I’lle will have the privilege of hosting the start of this year’s race on the 7th July, the 105th time the race will have been run.

Why am I telling you this? Well, the simple answer is that I recently had the privilege of visiting the Vendée region of France, a part of this vast country that I had never been to before.

It’s a part of France that has a long history and is believed to be the birthplace of Eleanor of Aquitane and was the base of her son, Richard I of England (better known as Richard the Lionheart).

It was a region that was greatly impacted by the French Wars of Religion and is an area that has been influenced by religion ever since. It also has a bloody and rebellious history with the peasants revolting against the revolutionary government way back in 1793 leading to a war that is estimated to have cost in excess of 240,000 lives when it ended some three years later. I’m glad to say though that the area is much calmer now!

Cycling really is a passion for the French, with the Tour being the best known of the three Grand Tours that take part in cycling each year. As such, it is an honour for any town or city to host the Grand Depart bringing with it great recognition and publicity as well as massive television exposure, not just in France but across the world.

But you don’t need to don your lycra and get out your sleek racing bike to follow in the footsteps of the professionals – you can cheat a little, hire an electric bike and set out for a morning or afternoons cycling in the area. It really is a great way to get out in the fresh air, enjoy a little exercise and see what is on offer and trust me, there’s plenty of that.

The Vendée is home to the largest cycling network in the whole of France with in excess of 1,100km’s of waymarked and signposted trails and paths – and no you don’t have to cycle them all – with many of them running alongside the fantastic sandy beaches that hug the wild Atlantic coast or through the pine forests that nestle in the stunning sand dunes that are also a feature of the coastline here.

My journey took me from the family friendly resort of Saint-Jean-de-Monts up the coast to the outskirts of Noirmoutier itself, a distance of around 35 kms which sounds quite a long way, but it isn’t that bad when you realise you have electric power to help you, and to be perfectly honest, it was a lovely way to exercise and enjoy the fresh air at the same time.

But if cycling is not your thing then don’t despair. If you love the outdoors as much as I do there’s more than enough to keep you occupied. Alongside the cycle paths are plenty of waymarked and signposted walking routes through the pine forests to the large and largely deserted sandy beaches. It’s almost impossible to get lost as the signposting is that good, and as the terrain is relatively flat its quite easy walking as well.

This part of France is also full of lovely towns and villages to explore and being relatively quiet, it’s quite easy to get around as well.

Try heading over to the lovely little village of Sallertaine located in the marshlands, a village that is well known for its arts and crafts. You can canoe round the marshes and even watch flour being milled in the old windmill that can trace its roots back to 1560. You can then enjoy a crepe and a glass of locally brewed cider before heading back to the village.

You can then head back full circle and visit Noirmoutier itself which you approach via its impressive bridge that connects the island to the mainland. The town is a pretty little gem and well worth a visit. On the way, why not visit one of the oyster farms and I guarantee you’ll never taste a fresher oyster in your life. Wash it down with a crisp cold glass of local dry white wine and you are in seafood heaven especially if the sun is shining on your back as it was when I visited.

I stayed just on the outskirts of the seaside town of Saint Jean de Monts with its long sandy beach and all the amenities you could want on your doorstep courtesy of Summer France.

There are many types of accommodation for you to choose from including private villas with pools, spacious apartments, houses located on a golf course and detached holiday homes close to the beaches, many of which have their own pools. Whether you are travelling as a couple or as a family with two generations of adults and grandkids, then there is plenty of choice for you. This part of the country really is unspoilt and is well worth a visit – you won’t be disappointed! 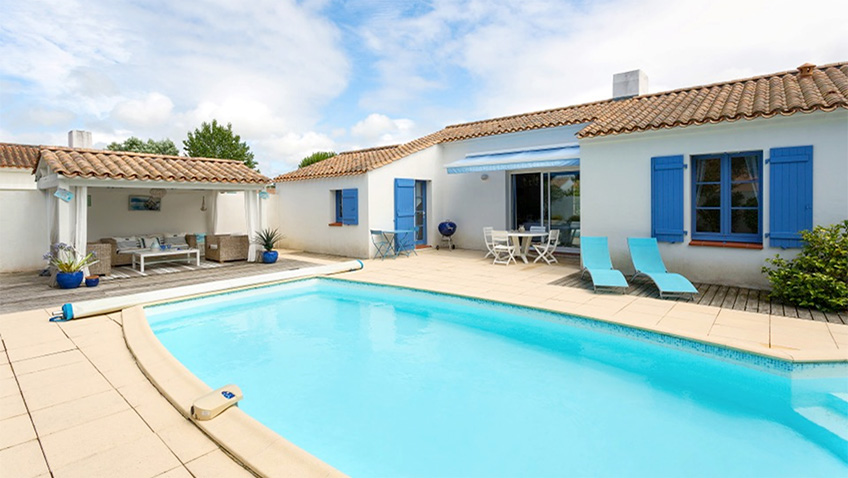