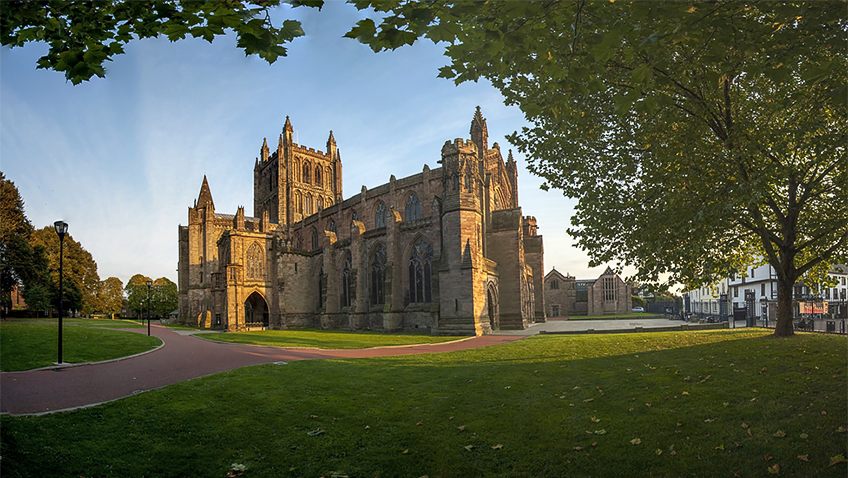 It was one of the first places ever to be founded in England after the end of Roman Rule and was often referred to as a frontier town, given its location on the border between the Welsh and English people (long before the countries of Wales and England were defined as we know them today). It’s steeped in history and its cathedral, which dates back to 1079, is one of the oldest in England and also is home to the world famous Mappa Mundi, more of which later. It also plays host to the world’s oldest Music Festival, The Three Choirs Festival, which is held in the city every three years.

This city is strategically located on the north bank of the River Wye and was an important site, fortified to defend against the marauding Welsh. Its military connections remain strong to this day as it is home to what is widely regarded as the best known “elite” fighting force in the world, the Special Air Service, or SAS as we know them.

And if you are thirsty, it is also home to one of the largest cider makers in the world. If you haven’t guessed by now, I am of course talking about the beautiful city of Hereford.

Coming from the South West my journey took me through the lush and extremely beautiful Wye Valley. On the way, a great place to stop off is Symonds Yat rock, where you get a magnificent view over the river below. If your eyesight is good you may see Peregrine falcons in flight. If the birds elude you, there is plenty happening on and around the river as it’s a popular outdoor pursuits area.

Descending to the village of Symonds Yat itself you will see that walking, kayaking and climbing are all popular activities here. A stroll down the riverbank is certainly relaxing, as is just sitting by the river watching it meander by on its steady journey to the Severn Estuary at nearby Chepstow.

It was then on to my stop for the next two nights, The Pilgrim Hotel which is in a great location in the small village of Much Birch, almost midway between picturesque Ross-on-Wye and Hereford. Owned and run by former Gloucester & British Lions rugby star, Steve Boyle, the Pilgrim has 20 bedrooms, five of which have recently and tastefully been upgraded to their new “Country Collection” style, and provide good sized, comfortable accommodation, ideal for a short break. Everything you need is on-site with a fully stocked bar whilst dinner can be taken in the stunning conservatory with fantastic views down towards the Black Mountains. The ambience is relaxed and the staff friendly and helpful. A sign of a good hotel is when it is used by locals as much as guests, and that’s certainly the case with The Pilgrim.

After a hearty breakfast it was a short drive to explore the nearby city of Hereford. This was my first visit, and to be honest I was enchanted by it, but it’s a city that I guess many people are unfamiliar with. It’s not really on the road to anywhere and you have to make a special journey to visit. Showing its isolation, it wasn’t until 1845 that it was connected to the canal network, when one of the last canals to be built in Britain finally reached it, but it certainly has a lot to offer and a lot to recommend it.

Now, Hereford is not a big city that’s for sure, but that only adds to its appeal. It’s relatively easy to get around and the chances of getting lost are slim. It’s also quite flat, so it’s not too taxing, especially for those with limited mobility.

The jewel in Hereford’s crown is undoubtedly the Cathedral, formally named the Cathedral Church of the Blessed Virgin Mary and St Ethelbert. You could quite easily spend a day here just looking round, taking in the majesty of the beautiful building and its garden, or visiting the Mappa Mundi exhibition itself. 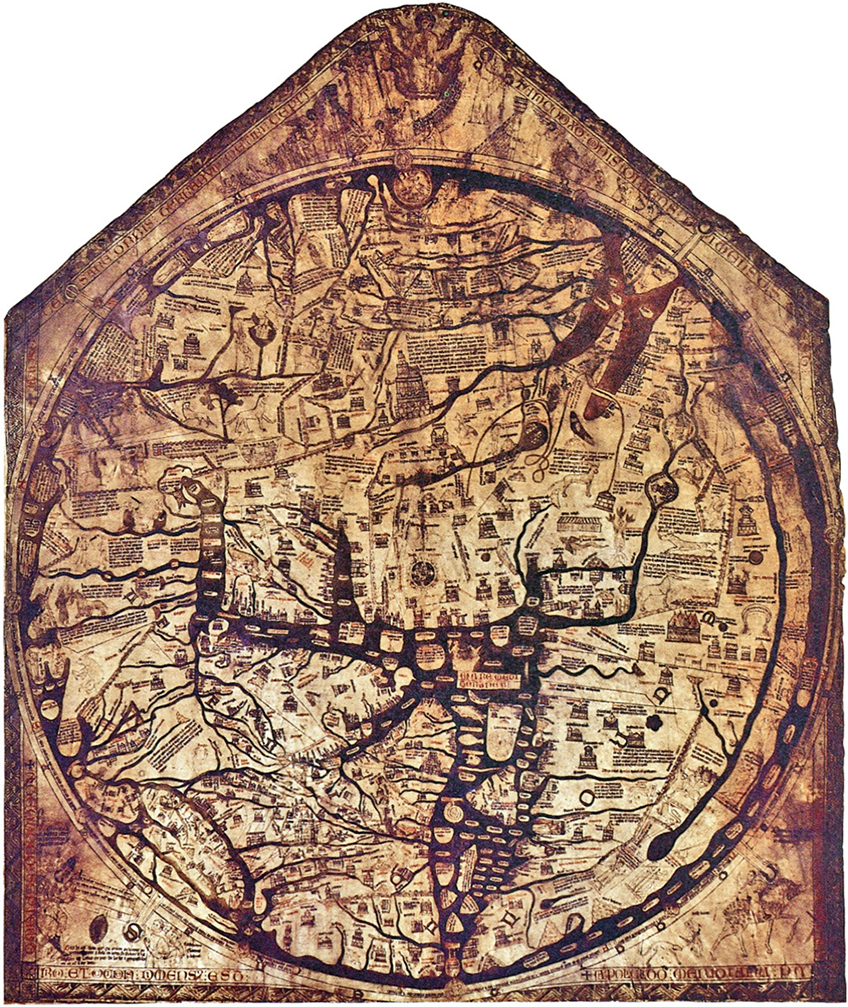 The Mappa Mundi is a record of how 13th Century scholars interpreted the world, not just in geographic terms but also spiritually. The map is circular and, reflecting the thinking of the Medieval church, has Jerusalem at the center of the world. Superimposed on the various continents are drawings of the history of humankind and the marvels of the natural world. It is a remarkable thing, especially when you consider the means of transport and communication that existed when it was created.

The foresight and interpretation that must have gone into its creation are, in many ways, beyond comprehension. Today it is quite rightly regarded as the most remarkable illustrated English manuscript of any kind. So much so that it is recognised by UNESCO with an entry on its Memory of the World register, a status for documents that is similar to that of a World Heritage Site.

Places to go, things to see

But it’s not just for the Cathedral and the Mappa Mundi that Hereford is worth a visit. It is full of other fascinating museums that are well worth exploring such as the Waterworks Museum which houses some of the oldest working steam pumping engines in the UK. If you fancy learning a bit about “scrumpy” then the cider museum makes for a fascinating visit. A trip to the Hereford Museum & Art Gallery website will tell you all about their regular events and exhibitions.

A gentle stroll around the city’s history laden streets is well worth the time and effort. You can walk across the ancient bridge over the River Wye, sit in one of the coffee shops or bars that are all over the city and just watch the world go by, or potter around the quirky independent shops that are a delight.

Andrew Silk was a guest of the Pilgrim Country House Hotel located mid-way between Hereford and Ross-on-Wye, in the Wye Valley. There are several packages to choose from including the “Country Break” which includes two nights’ dinner, bed and breakfast, with a third night’s B&B free of charge. The breaks cost from £135 per person in a Garden View room, or from £165 per person in one of the new, designer, Country Collection rooms (both prices based on two people sharing a room). 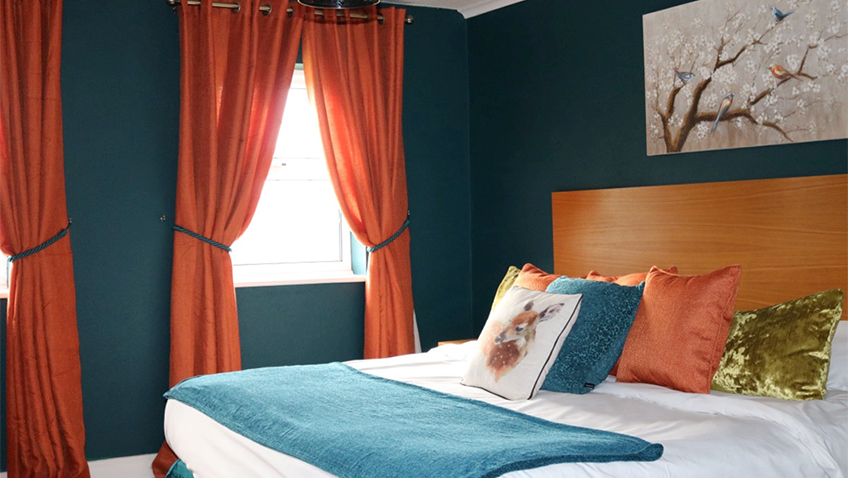