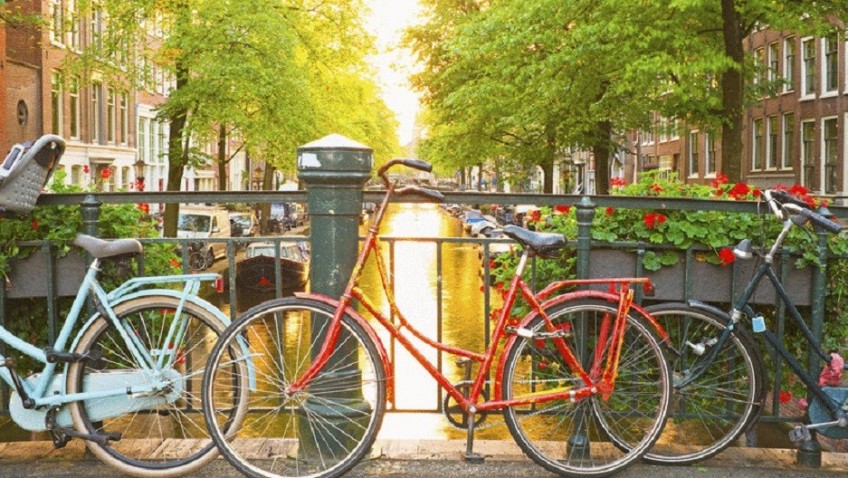 What’s Max Bygraves got to do with Amsterdam I might hear you say!  Well, most of you will know the answer to that question – it’s the title of his 1958 smash hit that became one of his signature songs, Tulips from Amsterdam – one that is still played many times over today! So Amsterdam is famous for its tulips according to Max – but of course that’s not all its famous for – it’s now seen as one of the great tourist and party cities of Europe – that’s partly because of its slightly naughty (dependant on your viewpoint) reputation, but perhaps more so because, as a city, it’s so friendly, so pretty, so welcoming and has so much to offer the tourist.

The City traces its roots right back to the 12th Century and it gets its name from the Amstel River that flows into the band of water known as the Ij.  It was here that the first settlers built dams across the river, hence Amsterdam, to create a harbour which in turn became an important trading post, the entry to the City and the first driver of wealth.

The City is famous for its network of canals, in fact it has over 100 kilometres of them – and it is these that often lead to it being called the Venice of the North.  There are three main canals, known as the Herengracht, Prinsengracht and Keizersgracht off which many, many others canal flow.

The interesting thing about these three main canals is that if you look at a map of the city from above, they form three concentric belts around the city, starting and finishing in the aforementioned Ij.  It’s almost as if when space became short or at a premium anther belt was added! But what is really nice abut Amsterdam is its size – it packs a hell of a lot in for a relatively small city – the beauty of this is that it is easy to navigate around, everything is in relatively close proximity and because most of the Dutch people speak excellent English it’s a city that if you get lost in, you can quickly find help!

For all you culture vultures out there then the museum network in Amsterdam will literally keep you occupied for days.

The City has over 60 museums to visit – apparently the highest number of any city on the world – and these are dominated by just three of the beast – but my what beasts they are.

Centred around Museumplein (I wonder where it got its name from?) you will find perhaps the most famous of all Amsterdam’s museums – the Rijksmuseum – this is a colossus of a place and is said to contain over 7,500 works by all the Dutch Masters across some 1.5km of galleries – a day out in itself.  You’ll see Rembrandt’s The Night Watch, perhaps one of his most famous paintings.

After that you can move onto The Van Gogh Museum which contains the world’s largest collection of his work whilst the last of the big three, the Stedelijk Museum specialises in modern art – here you can see works by Monet and Matisse to name just two!  And if that’s not enough, then close by is the Museum Het Rembrandthuis stuffed to the rafters with drawings and etchings by the man himself – the museum is actually located in the canal house where Rembrandt lived and worked.

But as I say, there are over 60 museums in the City – so why not explore some of the lesser known ones.  You will find, especially if you go in the summer, that the so called ‘big’ museums get really busy – so if its these you really want to go and see then pre-book your tickets, otherwise you could find yourself in a very long queue indeed!

One of the most striking things about the City as you travel around it is the extraordinary architecture that you see – the canals are lined with magnificent buildings that were once homes for the many merchants and traders that operated out of it.  In fact the canal district is considered so picturesque that in 2010 it became a UNESCO World Heritage site.

As you wander around you will see just how beautiful this area really is – the thing that struck me was that many of the buildings seemed to lean in towards the canals – almost as it they were crooked or starting to fall in.

In actual fact they were built that way – because the houses contained many storeys and were often quite narrow the gables were built with a slight incline from which hooks were fixed, thus allowing the occupants to hoist furniture and other goods to the upper levels rather than having to carry them up the narrow stairways! I’m a great believer that one of the best ways to see a city is from the water – and this rule holds especially true in Amsterdam.  If you go to the area just outside Central Station you will find plenty of organised trips around the canals – they generally last just over an hour and are relatively cheap.

You get to see the Ij, where some the cruise liners and river cruises dock, but you can also enjoy the wonderful architecture of the canal district from the water itself – under many beautiful bridges  you will see many of the sights of the City as you travel around.

But if you just want to explore then it’s a city that you can do so very easily, either by using public transport, on foot or by bicycle – just a word of warning when you are out and about – watch out for the bikes – they are everywhere!

No piece on Amsterdam would be complete without mention of the Red Light District which is essentially the party area of the City.  If you want to visit this area then I would suggest you do so either during the daytime or early evening – remember why it’s there – and that’s essentially to part visitors from their money!  Late at night it can get quite rowdy and is more often than not crowded with hen and stag parties and everything that brings!

Travelling to Amsterdam couldn’t be easier – with flight times of just over an hour from most UK airports flying is the easiest way to get there and you will find that most UK airports have a budget airline service into Schipol Airport.

Once at the airport, there is an excellent train service that takes you into Amsterdam Central Station and from here you can jump on a bus, tram or ferry to most parts of the city.  The public transport network is excellent and if you buy an Amsterdam Travel Card for the duration of your stay you will be able to hop on and off the transport network as many times as you like – what’s more the card will also allow you return train travel to and from the airport!

The City really is a delight and if you’ve never been I would urge you to do so – with so much to do, so much going on, and so much to see it really is worth a visit!