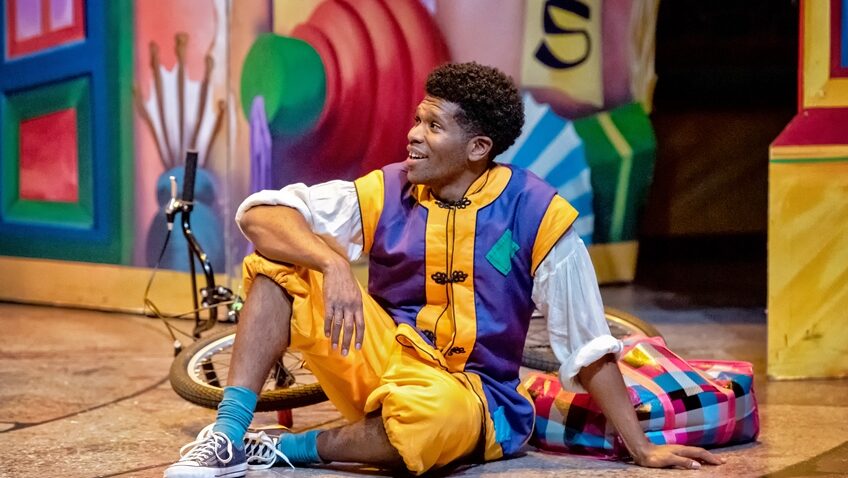 Riding along on bouncy waves of genuine fun and sparkle, Doncaster’s Aladdin slaps perpetual smiles on faces young and old and instantly has everyone shouting their participatory heads off with heartfelt involvement. The joy of the performers to be performing again is in itself a joy to behold.

Loud local laughs spill out from Joyce Brannagh’s engaging writing as she puts this Arabian Nights tale into the invisible – yet clearly visible and highly communicative – hands of Scheherezade (Katie Erich) who appears in showers of glitter and floaty garments to whisk us off to exotic places – like Widow Tallulah Twankey’s laundry in the district of Peking known as Doncaastaa, or the Mountains of Mexborough, The Fields of Sheff and the far-way Cave of Riches. There’s breadth and sparkle, too, in the well-known musical numbers as we start Downtown, get carried away by Gold, Money, Money, Money and declare I like to Move It Move It as Material Girl, Jean Genie, Rasputin and others take us towards Crazy.

The flowing, creative integration of BSL signing by the actors throughout enhances the show greatly, Connor Bryon winning hearts as endearing, silent signer-in-chief Lemmi the Lemur, his acting, dancing and signing all done in furry ears, denim and a handsome ring-striped tail. Thanks to Lladel Bryant, our worthy, good-hearted Aladdin has a super singing voice that works in magnificent duet blend with the fine voice of Alyce Liburd as tiara-and-overall-wearing, spanner-toting would-be engineer Princess Jasmine. Alyce is also The Spirit of the Ring, aka Alexa, a likeable/annoying digital spirit who, when summoned, mishears your every word: ask for a magic lamp and you’ll get a tragic lamp; the faraway cave? off you whisk to a far-out rave.

Role-doubler-upper Sophie Ellicott pours energy and pizzazz into being both Aladdin’s sister, the football-obsessed Wishee, whose room is kept deliberately untidy because a great footballer is… Messi (groan!) and also the glittering Genie of the Lamp whose Cilla Black persona also creates a lorra laughs. Another doubler-upper is Katie Erich as dizzy Scheherazade and the haughty Empress.

And what of Widow Twankey? Who is it modelling such outrageously splendid creations on the Dame Frock Front – glorious lamp/Chinese lantern/lamp-shade ensembles, a Vampish laundrywoman kit, a Cleopatra outfit wreathed in long and winding asps, and a recycled number that sports solar-panel epaulettes and tin-can curlers? It’s Mark Stratton, whose strong, likeable Dame Tallulah builds fine rapport with the audience – and most especially with Tom in row three. Their sudden elopement is all set to feature on the next Look North news flash until a certain Abanazar intervenes. Booed from start almost to finish, Ian Crowe relishes every moment of wicked evil as Abanazar Banana, a Ming the Merciless/Sheriff of Nottingham/Kirk Douglas of a villain whom the audience detest from the word go, and quite right, too.

Strong acting, singing, dancing and smiling from professionals and local youngsters alike throw in acrobatics, Laurel and Hardy cops and Benny Hill chases to boot, while another local lad who was in with a shout when it came to casting was Brian Blessed. Brian’s mighty booming tones erupt from the hairy yeti Monster of Mexborough. Debatably less hairy and terrifying than the man himself, the monster is scary enough when it keeps appearing, suddenly and elusively, right BEHIND our characters as they sit innocently singing on a bench. Again and again the frantic audience yells itself hoarse alerting them to the monster’s whereabouts, but fortunately, they all have voice enough left for the My Bestie sing-a-long.

Contributing to the intimate atmosphere of the show, the traditionally painted sets and scenery enjoy extra sparkle and magic from lights, glitter and hazy mists. Even the most cynical, obnoxious kids are impressed as Aladdin’s magic carpet rides across a starlit sky, and they’re totally gobsmacked to behold the breathtakingly beautiful Willow Pattern finale of stunning blue, icy white and shimmering silver. All they can say is, “Wow! Amazing!” And that’s all that needs be said.