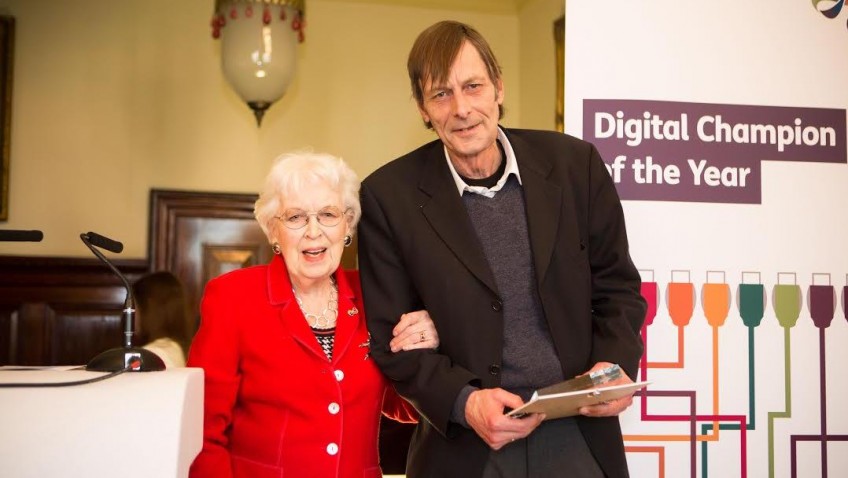 New research by Age UK reveals that the overwhelming majority (85%) of older people aged 55 and over who use the Internet say their life has changed for the better by being online, with 45% saying they now can’t imagine their life without it.

The online survey, carried out by YouGov on behalf of the Charity, revealed that the growing number of older people online are benefitting from all it has to offer, with 42% using the web to save money and three in ten (29%) feeling it has brought them closer to family and friends.

The findings come as Age UK announce web user John Davies as its Digital Champion of the Year 2015. The awards aim to inspire the 4.8 million older people who have never been online1 to give it a try by recognising the achievements of those who have taken that step.

John learnt how to get online just over a year ago at the age of 58 after having never touched a keyboard in his life. He was unemployed at the time and needed digital skills to apply for jobs, realising many employers seek CVs and covering letters, or require people to apply online. John visited his local Internet café for support and in just one year, he learnt all the skills he needed and has since become a volunteer at the café, where he’s helping older people in his community to get online.

John was chosen as the winner by a panel of industry experts and past winners of the awards, who have gone on to become digital ambassadors for Age UK.

John, 59 from Great Yarmouth, said: “Having just got online only a year ago, I’m really honoured to have won this award. For most of my life I never had to use a computer, but I knew I had to start learning at some point and I’m glad that I now have digital skills that I can share with others. I hope to encourage more people to give it go as an Age UK Digital Champion.”

Age UK Ambassador June Whitfield said: “I’m one of the growing numbers of older people who enjoys being online and so I’m delighted to join Age UK in celebrating the achievements of older web users. John is a fantastic Digital Champion who is already inspiring and supporting others to get online. Well done to John and all those shortlisted for your amazing achievements.”

Lucy Hastings, Programme Director of Strategy at Age UK, said: “We’re delighted to crown John our Digital Champion of the Year who is a truly deserved winner. Not only did he take the step himself to get online and overcame many difficulties along the way, he’s now helping and inspiring others and enabling them to experience all the benefits the Internet has to offer.”

John and the Age UK Digital Champion of the Year runners-up will become ambassadors for Age UK helping to inspire and support other older people across the nation to take that bold next step and get online.

The Age UK network helps thousands of people in later life gain skills and confidence to use the Internet. For more information about support to get online in your area call 0800 169 65 65 or visit www.ageuk.org.uk/it.