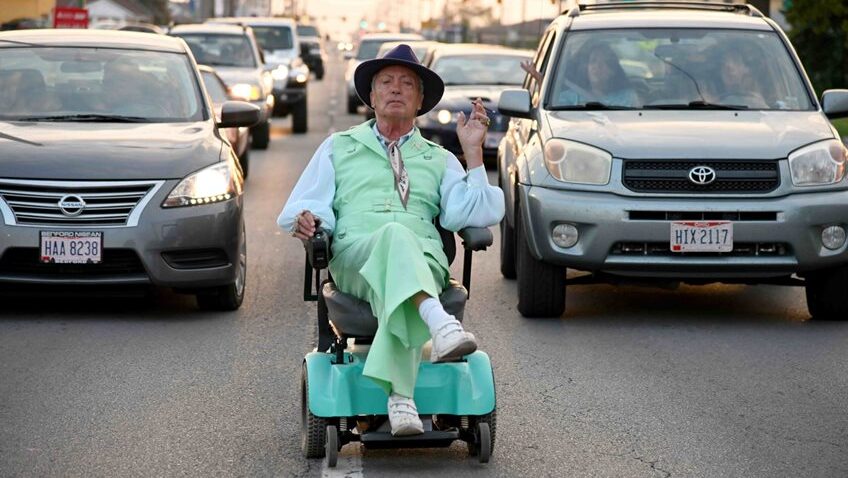 77-year-old Udo Kier soars above his material in his dazzling portrayal of a real life hairdresser.

The question is not whether you remember Udo Kier, but rather how you could ever forget him. The German character actor has featured in some 220 films from the eponymous Baron in Andy Warhol’s Flesh for Frankenstein (1973) to Ron Camp in Ace Ventura: Pet Detective (1994), to a NASA flight psychologist in Armageddon (1998) and the role of a sadistic sailor in Breaking the Waves (1996) the first of many in films by Lars von Triers. Kier has a distinctive face, but an equally distinctive and still notably accented voice, which has given him a still lucrative career voicing a wide array of characters.

But now, at 77, Kier has made an astonishing come back in Todd Stephen’s bittersweet Swan Song. A caption tells us that the film is “Inspired by a True Icon,” and while part of it is shot in a dreamy and surreal way, it is obvious that this is a story you couldn’t (or wouldn’t) make up. Patrick Pitsenbarger is based on a hairdresser who catered to the socialites of priggish Sandusky by day, and by night enlivened the town’s only gay bar dressed like a mixture of “Liberace and Quentin Crisp.” Unlike Kier, Pitsenbarger was discreetly, if openly gay before it was accepted, and Kier relishes the role, turning the uneven script into a film worth seeing.

Patrick Pitsenbarger lives in a pair of grey sweatpants in a cramped, depressing room in a care home in small town Ohio. His main activities are nicking napkins from the restaurant that he endlessly folds, and cigarettes from wherever he can get them which he endlessly smokes. He finds ways to hide his habit from the nurse who reminds him of his stroke. These are the only remnants of his once defiant persona.

When Pitsenbarger’s routine is interrupted by the attorney of the recently deceased society matron, Rita Parker Sloan (Linda Evans, best known for TV’s Dynasty and the 1965 film Beach Blanket Bingo) he barely reacts. Even the prospect of a lucrative job offer, is met with an emotionless, “I’m retired.”

The attorney is persuasive, asking if he would really “deny a great lady her dying wish.” In her will Ms Sloan has made a provision for him to receive $25,000 for doing her hair for her funeral – and “to make things right.” The body is at the snobbish Ransom Funeral Parlour. Pitsenbarger wants the money, but he’s a proud man who cannot bring himself to forgive her for ignoring his lover, David’s funeral.

The taciturn, chain smoking occupant, whose mind is full of opera music and conversations with lost friends, searches through a box full of miscellaneous objects and photos, examining some. He goes out to the staircase landing for a smoke with a comatose, once attractive woman in a wheelchair. He fools around with her hair, whispering, “beautiful,” and then noting that she has urinated on the floor.

It’s time to get out. The rest of the film is an Odyssey and a trip down memory’s rocky lane, as Pitsenbarger escapes the confines of his care home to face the town in which he carved out a niche on his own terms – or almost.

Still living in the past, Pitsenbarger is surprised to find that his defiant pomposity is unnecessary, as times have changed. Hitchhiking with a makeshift sign, “free beauty tips” is more suspicious than enticing although the harmless looking septuagenarian has no problem getting a lift into town. Whether the driver is really fascinated with the rings on his hands or not, when he tells her, ‘there are plenty more where that came from and each one has a story,’ we are glad to skip them.

He walks down the quiet, sunny residential streets to the centre of town, hardly a high street, making various stops along the way to cash a government cheque in exchange for cigarettes, and to purchase hair products he once used that have since been replaced with lower quality imitations.

A trip to the site of the house he shared with David reveals a complex history of regret and a reflection on the days where co-habiting males had no recognised property rights. The house was pulled down and as David died intestate, the property went to his nephew.

The script is in turn, under written, dull, confusing and overwrought but some encounters register more than others. Tension builds during a visit to the salon run by his former protégé, Dee Dee Dale in a standout cameo by Jennifer Coolidge, who goes for the jugular. It feels like a real tale of betrayal, common in the high end hair salon business, and sheds light on Pitsenbarger’s feud with Ms Sloan.

A sweet shop worker, Sue (Stephanie McVay) remembers how Pitsenbarger once did her hair, and to her surprise, he remembers her too. ‘It’s all up here, it just takes a while,’ he says when she is flattered that he remembers her son’s name, too. But that was his business. Unaware he has no money, Sue ends up donating a lime green suit with a purple hat that transforms the dusty old man into Mr Pat, and, while the outfit is like a dayglow sign, Kier, supple and trim, carries it off like a model.

Equally touching is an exchange with Gabriel (Thom Hilton) the soon-to-be-unemployed bar tender who informs Pitsenbarger that the owner sold the club to a young couple and that night is, coincidentally, the last after 41 years. The drag flashbacks are now so old hat that they fail to have the emotional impact of later visit to the Sloan house where he meets her now adult son Dustin (Michael Urie).

If it’s a shame that Rita Sloan’s transformation is anti-climactic, lacking the creativity that we would expect from this renowned hairdresser’s swan song, his short scene with Linda Evens glows. No pun intended, Kier plays the film straight, giving it his all and seizes this rare opportunity to bring a tear to your eye.