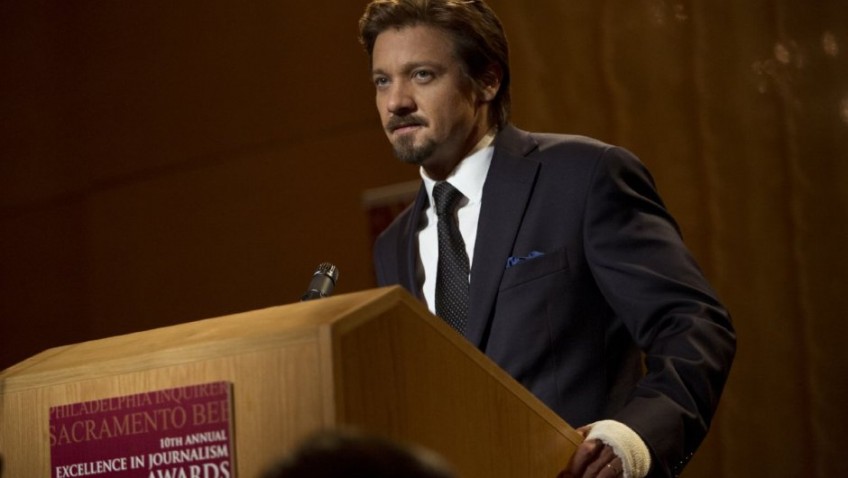 As the title of this ‘based on a true story’ film suggests, Kill the Messenger is about injustice. In this case, the victim is a Pulitzer Prize winning investigative reporter for the San Jose Mercury News.  Gary Webb’s ‘Dark Alliance’ series about the USA’s CIA and DEA involvement in drug smuggling to arm the rebel Contras in Nicaragua, was praised at first, but gradually proved his downfall. If Direct Michael Cuesta’s film lacks the probing and the alternative points of view the subject demands, the film is compelling from beginning to end and Jeremy Renner gives his best performance since his Oscar nominated performance in The Hurt Locker.

Gary Webb was a seasoned investigative reporter with a strong reputation when he was recruited by the San Jose Mercury News in 1988.  Two years after being hired by their Sacramento bureau, he helped the paper win the Pulitzer Prize for his reporting on the Loma Prieta Earthquake.  Webb’s next story was almost as rewarding, earning him the Journalist of the Year award from the Society of Professional Journalists. It was however, dynamite in the hands of relatively small paper that might have been ill-equipped to handle it.

A leaked transcript from the trial of Nicaraguan drug smuggler Danilo Blandon, followed by an interview with Blandon, and a series of events, chance encounters, and additional interviews that scriptwriter Peter Landesman’s detailed script chronicles, in 1995 Webb presents his editor (Mary Elizabeth Winstead) with the first in a series of articles called Dark Alliance. A trip to South America helps Webb to draw connections between the CIA and the Columbian drug cartels that were flooding the streets of America with drugs at the time.

Webb’s article credit Drug Dealer Ricky Ross (Michael Williams), who cooperated with a police corruption case, smuggler-turned-informant Oscar Blandon (Yul Vazquez) and smuggler Norwin Meneses (Andy Garcia) with triggering the crack cocaine explosion, a charge that is perhaps the most questionable of his claims. Webb’s, or the paper’s, biggest mistake was not to distinguish significantly between what the CIA actually knew, and what it should have anticipated, but did not actually know.  As a result of the articles, groups of primarily black families whose children and loved ones had been disproportionately affected by the street drugs, began protesting around the country. This alarmed politicians and triggered more scrutiny of the stories.

The articles naturally created a furore, most fatally for Webb, amongst rival newspapers.  There is a scene in which the editor of the LA Times berates his staff for failing to uncover the story and then charges them with finding holes or otherwise discrediting Webb’s evidence.  Cuesta leaves us to believe it was jealousy rather than serious doubts about the credibility of the evidence that was responsible for the often hostile reactions of the rival papers.

There are, of course, discrepancies between Webb’s book, Dark Alliance, the facts, and the film, some of which are unfortunate, even taking into account dramatic licence as they unnecessarily muddy the water.   In his book Webb never says that he interviewed Meneses (Andy Garcia), or that he was searched and threatened by Federal Agents as he is so outrageously in the film.  The film also seems to show that Mercury News Executive Editor Jerry Ceppos (Oliver Platt) withdrew support from Webb unfairly and early on, when in fact, Ceppos continually supported Webb publicly and in writing, and allowed him to continue working on the story.  Eventually, Ceppos published his internal enquiry into the story, admitting that it fell short in four areas, (oversimplification, graphics, imprecise language and impressions open to misinterpretation), all pointing more to poor editing than to Webb’s integrity.

One of the most dramatic and moving scenes in the film is, however, based on fact.  Despite the controversy that had risen over the story, the Society of Professional Journalists do go ahead with the Journalist of the Year award.  Webb and his wife (Rosemarie DeWitt) and their proud teenage son travel to the awards where we see Webb accept the award, and then resign in principle from his job after a tearfully impassioned speech about why he became an investigative reporter.

Kill the Messenger is an absorbing film that can be enjoyed, like All the  President’s Men, or The Insider, as a battle between the righteous who tirelessly toil to expose the truth despite the personal risks and the authorities that be.  That said, the lack of objectivity might bother probing minds in the audience.  Why, for instance, did Webb not try to tape record or secure any kind of hard evidence to back his claims?  Webb provides excellent answers, e.g. bribed prison officials in Honduras do not issue receipts, but Cuesta and Landesman, you feel, do not want the audience to doubt Webb’s story.  We see one of his sources being kidnapped (by either local militia or the CIA) and, probably, disposed of, suggesting what he is up against.

In choosing Renner Cuesta has also cast the perfect actor to portray Webb, who dominates almost every scene. Renner convinces us that this heroic reporter is a man of exceptional integrity, whose career was unfairly snuffed out, along with the truth, and whose life cut short just for doing his job.