A grandfather-of-six was stunned when he tended his flowerbed and dug up a long-lost First World War medal almost 100 years old.

David Wild, 67, has lived in his mid-terraced house for 45 years and spends most of his free time tending to his garden.

But as he unearthed old bulbs to put in a pot he was shocked to discover the bronze four-pointed 1914-15 Star medal.

Mr. Wild, a former welder from Bishops Stortford, Herts., said: “It was a bit strange really. It was a surprise to find it in my back garden. 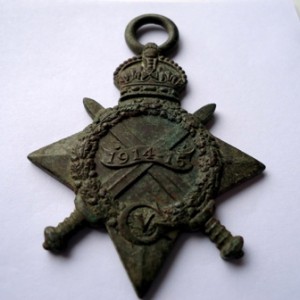 “I must have dug up that area of the garden two or three hundred times before. I was just digging out last year’s bulbs when I came across it.

“First of all I though it was a children’s badge, but then I picked it up and it felt a lot heavier.”

The name of William Obsorne is inscribed on the back of the campaign medal, which was issued in 1918 to all servicemen who served in the opening years of the war.

Mr Wild has discovered that he died six weeks before the war ended and four months after marrying his childhood sweetheart.

He is now trying to track down the soldier’s surviving family to return the medal to them.