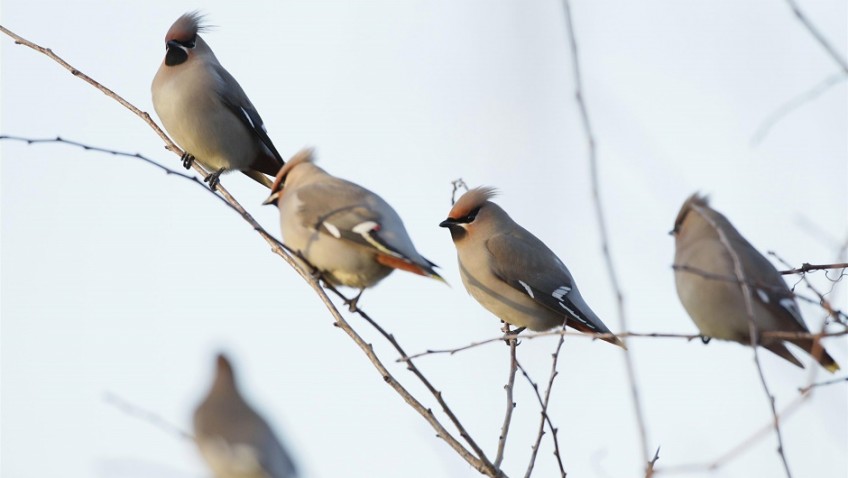 By the RSPB’s Jamie Wyver

Wrap up warm to enjoy some of Britain’s best winter wildlife spectacles: from whirling clouds of hundreds of birds to fluffy white seal pups, this is the season to see nature at its wildest.

Have you ever witnessed a starling murmuration? “Murmuration” describes the sound of thousands of wings whirring as huge flocks of starlings swirl in dramatic shapes overhead at dusk, gathering to roost. Often, starlings will roost near or over water, for example in reedbeds or on piers, giving them extra protection from ground predators. The birds move even more dramatically if there are birds of prey in the sky. Their huge numbers and complicated movements often thwart the attempts of the peregrines and sparrowhawks trying to hunt them. Across the country flocks of chattering winter thrushes have arrived from the north to feast in trees and hedgerows. Our native blackbirds and thrushes are joined by their continental relatives, including many blackbirds from Scandinavia. Fieldfares, large thrushes with blue grey hoods and rumps are with us from October to March, looking for berries and other fruit. These birds have a distinctive chuckling call as they pass overhead. Their smaller cousins the redwings are often found in the same locations, hedges, fruit trees and playing fields. Their ‘seeeeep’ call is often heard when they move around at night.

In some winters, and this may be one of them, large numbers of waxwings also join us from northern parts. These are striking looking starling-sized birds with black eye stripes, impressive crests and the sealing-wax red wingtips from which they get their name. Flocks of these birds descend on rowan trees or hawthorn bushes to gorge on the berries. As they don’t seem to have a fear of people, perhaps because they’re from remote, uninhabited regions, they can often be found feeding in urban areas and supermarket car parks. They have a call that sounds like sleigh bells, which seems appropriate for a bird that appears during the festive season. Our coastal nature reserves in winter host spectacular numbers of waders and wildfowl, birds which have travelled from their breeding grounds in the far north in search of food. At Snettisham in Norfolk, for example, you can watch tens of thousands of birds move with the tide. As the sea comes in, these huge flocks of birds like knot and bar-tailed godwit move up the shore on to the islands in front of the reserve’s hides, where they’ll wait for the tide to draw back and uncover the mudflats where they feed. Thousands of pink-footed geese roost on The Wash and fly inland at dawn to feed in the surrounding fields. These geese will have flown here from Spitsbergen, Greenland or Iceland and will spend the winter feasting on the remains of the sugar beet crop, seeds, potatoes and grass.

Despite the freezing temperatures and choppy waters grey seals choose this season to haul ashore and give birth to their pups. It’s thought that females do this now as they’re in peak condition having fattened up on fish over the summer. The pups are born white, a characteristic which has stayed with them from the Ice Age when they would have been camouflaged on the snow. The best place to see the seals and their pups is the East coast, for example the Farne Islands in Northumberland, Donna Nook in Lincolnshire and Horsey in Norfolk.

Find out more about what you can see on our nature reserves this winter: rspb.org.uk/reserves