Home / HEALTH / The secret to success 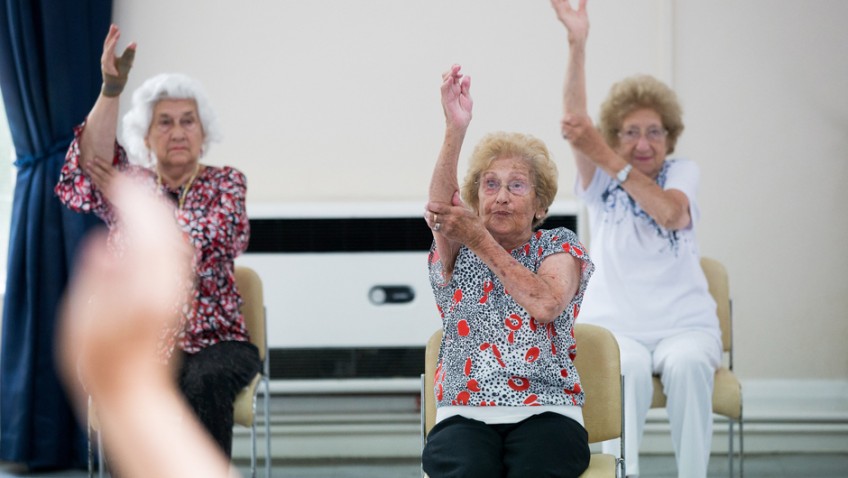 The secret to success

Meet the UK’s oldest fitness instructor who is still teaching two classes a week thanks to her daily brandy – at the age of 99.

Minnie Solomons has been teaching keep fit classes for fifty years and shows no sign of slowing down – even after having a hip operation.

The great-grandmother teaches her exercise classes every Monday and Tuesday and only gave up her Wednesday class 18 months ago. But she has ditched the leotards and dance routines of her earlier years in favour of seated aerobics for the over 70s.

Minnie, from London,  still easily remembers the 45-minute routines and adds new moves to keep her students – most of whom are two decades her junior – on the ball. “I started 50 years ago when it was all standing up and on the floor and the rest of it, but now it is just chair exercises.

“I get great satisfaction from doing it and I thank God every day that I am able to do it. I do a Monday and a Tuesday and I used to do a Wednesday too, until I had the hip operation.

Unfortunately I still have an ache, so something had to go.

“What really pleases me is when I read a magazine or something like that and I see someone doing a different exercise and I am able to introduce it into my class.  It’s really enjoyable and what I find so satisfying is now I have men coming along to my class, which they never used to.

“They love it. I don’t have any mucking about in my class, but we do have a little laugh. What also pleases me is that I can remember 30 little movements, one after the other, without any trouble.

“I’m going to keep going and I really don’t know when I will stop. I say to myself ‘this is ridiculous’, but I can still do it, so I keep going.”

The great-grandmother of four, who lived through both World Wars, was born in 1917 and was evacuated during the Blitz.  She married Jacob Solomon in 1939, a boxer in the RAF, and they had one daughter together, and worked together in his electrician’s shop.

When Jacob, or Tonney as he was affectionately known, passed away 20 years ago, Minnie never remarried – but kept her love of physical activity.

She now leads fitness classes in South Woodford in north-east London for a group of over-70s, as well as another class nearby.

Granddaughter Naomi Lyons, 56, said: “She doesn’t realise how unique she is. She can’t quite do what she used to do but she has this incredible way of thinking.

“Sometimes I think she’s barking mad, but most of the time I think fair play. She’s been doing keep fit since I was a teenager.

“I remember her always writing down exercises and different movements in a book. It’s mainly chair exercises. She showed me some of their little movements – some of them can hardly move. She sees the funny side. My grandma loves it because it’s so sociable as well.”

The fitness fanatic lives a thrifty lifestyle and her weekly shopping bill comes to just £5 – treating herself to a glass of brandy every night, and just a weekly shower.

Naomi, who is also her full-time carer, says that people are stunned when they find out the secret to Minnie’s success. “They ask her what she eats to stay looking that young and she tells them “lettuce!” she said. “They can’t believe it. She has a child’s portion really of salad and a couple of pieces of fruit. She has family meals with us too.”

Despite having a hip operation 18 months ago and suffering from arthritis, Minnie is still in good health and her doctor said she has the body of a much younger woman.

She refuses to let her hair go grey and the only beauty treatment she uses is Oil of Olay – which she has been applying for around 50 years.

Minnie’s wartime habits die hard, as she has a stand-up wash in the kitchen every day and still only uses powdered milk.

Naomi said: “I’ve tried to tell her that normal milk won’t go off, but she insists.”

She keeps her mind sharp by doing crosswords and is a keen Kalookie player.