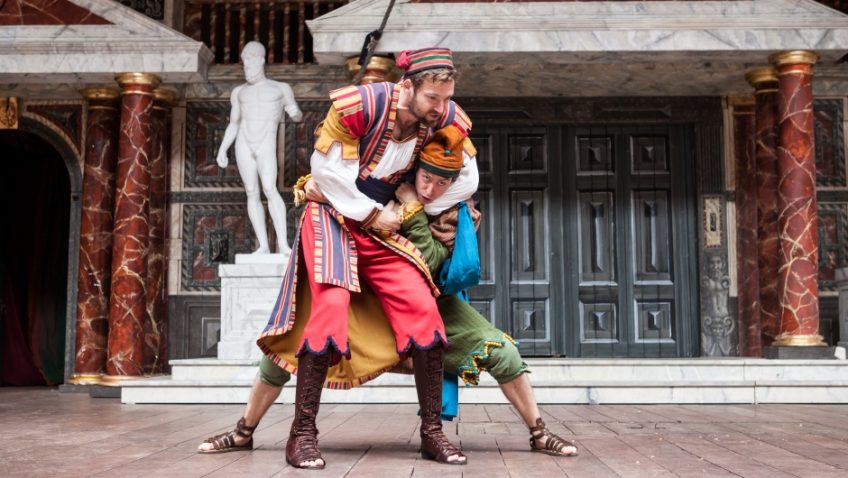 Two sets of twins doubles the confusion and laughs

Shakespeare’s farce, one of his earliest plays, has always been popular with the public.  There are two identical masters called Antipholus and two identical servants called Dromio. By having two sets of twins the confusion and laughs are doubled.

One set lives in Ephesus, which was notorious for its extravagance, lasciviousness, ribaldry, drunkenness and witchcraft. The other set normally lives in Syracuse.

The Syracusian twins come to Ephesus. Imagine their surprise when they find everyone knows them and they know nobody. Two Ephesian women have sex with them, thinking they are having sex with their husband and boy friend.

Blanche McIntyre aims her production at the Globe’s core audience and concentrates on the physical comedy. The leading characters behave in a madcap, unruly, slapstick way.

Everybody in the audience will enjoy Dromio of Syracuse’s crude description of the enormous greasy kitchen wench’s spherical body in terms of countries. Meanwhile, feminists may be bemused that the Church (in the persona of an Abbess) immediately blames the wife for her husband’s seeming erratic behaviour.

Antipholus of Ephesus gives an amusing account of the ordeal he has been through. I had forgotten that he had ended up in prison with his servant and had to gnaw his way through the ropes that bound them together in order to escape.

The masters are played by Simon Harrison and Matthew Needham. Their respective servants are played by Brodie Ross and Jamie Wilkes. They are an engaging quartet. The reunion of the Dromio twins at the end of the play is genuinely touching.