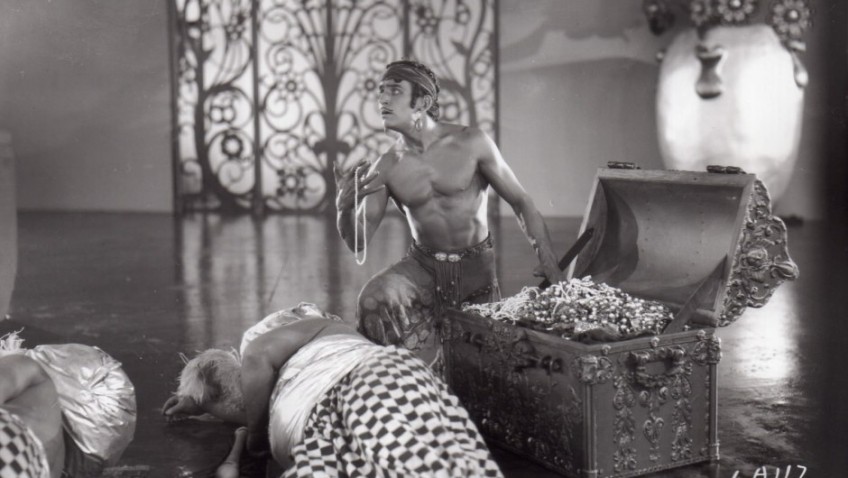 Two classics of the silent era: one American, one German

THE THIEF OF BAGDAD (Eureka). An American classic of the silent era: Douglas Fairbanks’ film (1923), spectacular Arabian kitsch in the manner of Ballets Russes and Scheherazade, is his own personal favourite. 40-year-old Fairbanks, all boyish high spirits and energy, moves and leaps; his athletic posture and grace inspired by Vaslav Nijinsky.

His actual mime is not so good. Sojin Kamijama as the Mogul Prince and Anna May Wong as a slave girl are much better actors.The sets by William Cameron Menzies are monumental. So are the crowds.

It was said there were 3,000 extras. The instant creation of a magical army is magical. (NB. The comic fat Persian Prince is played by a woman!) THE DIARY OF A LOST GIRL (Eureka). A German classic of the silent era: P W Pabst and Louise Brooks had worked together on Pandora’s Box. The Diary of a Lost Girl (1929), as controversial in its eroticism (and as critical of the bourgeoisie and their lack of compassion), is not as well known; but it should be. Brooks is cast as an innocent who is seduced on the eve of her confirmation.

Her baby is taken away from her and she is sent to a reformatory. She ends up in a high class brothel. Apart from Brook’s luminous performance (and her iconic black helmet hair style) there are three other actors who physically stand out: Fritz Rasp as the reptilian seducer and Andrews Englemann and Valeska Gert as the sadists in charge of the reformatory, good Nazis in the making.

HIDE YOUR SMILING FACES (Fusion). There is nothing to smile about. Daniel Patrick Carbone, in his directorial debut, observes American adolescents in a forest, far from civilisation, and in particular he observes a relationship between two young brothers and the older one’s affection, unrequited, for another boy.

You wait all the time for something to happen. But nothing does, which may be frustrating for some. The tension is maintained, however; death seems highly likely at any time. Carbone, lyrically and sensitively, keeps everything understated and never explains. You may wonder who the film is aimed at and who is going to watch it.

To buy your copy of any of these DVDs click on the image below.