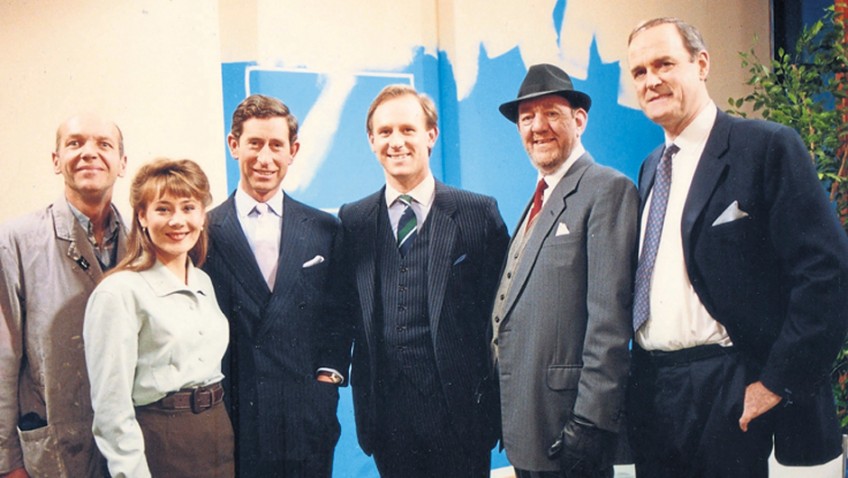 We all know a time lord, Doctor Who, of course, and if you like me, have grown up with the Doctor you will be able to name at least five, if not more. So imagine my delight when I was given the opportunity of talking to Doctor number five, the celery-sporting Peter Davison.

I have been reading his autobiography, Is There Life Outside the Box and was intrigued by the prolific career of this seemingly mild, self-effacing actor. Before I go any further I must stress that I don’t normally read biographies, preferring fiction, but the story of Peter’s life – well you couldn’t make it up!

So many fascinating facts, glimpses into the world of television and so many co-incidences make this a remarkable account of the life of this versatile actor, who is recognised by our generation for the characters that have delighted us on our television screens.

Peter, born in 1951, was the son of a mixed race marriage; his father was from British Guyana and his mother born of English parents in India. As a child he lived in Surrey and with his blue eyes and blond hair he grew up with three sisters as a slightly un-academic, but well-adjusted child.

The book charts his early life and moves fairly chronologically through his career. Although he is easily recognisable I was surprised to be reminded of how many varied roles he has played over the years.

We all remember him as the hapless young vet, Tristan Farnham, in All Creatures Great and Small. Peter has done a few television acting roles and was almost ready to give up on the profession when he was offered the part in the still hugely popular series set in the Yorkshire Dales. When I asked him what was his favourite job he named this one as probably top of the list, although he really enjoyed most of the characters he played. The cast of All Creatures all got on very well and he recently attended a reunion dinner.

If you read his book you will, like me, be captivated by the information on the people and shows that he was involved with and will share many happy memories of the seemingly more gentle entertainment on offer in the previous century.

From filming the vet stories in 1977 to becoming the fifth Doctor in 1981 to regenerating into the Margery Allingham detective creation Albert Campion, Peter has moved from one pleasant character to another. I asked him if he ever played a nasty part but he could not think of anyone really evil.

Charming and slightly eccentric seems to be his forte. One word he used in his book that summed him up was apologist and when I put this to him he reluctantly admitted that he was frequently saying sorry.

Peter admits that his career has been largely a matter of luck and that he has taken almost every part offered to him. From vet to Doctor, Detectives Campion and Dangerous Davies, family man in At Home With The Braithwaites and Ain’t Misbehavin’, his career has been one of many coincidences.

My personal favourite from his long list of characters was Doctor Steven Daker in A Very Peculiar Practice: who remembers that slightly off-beat comedy? Interestingly he worked in this with the actor David Troughton who is the son of the second Doctor Who, Patrick Troughton.

In real life too his daughter, actress Georgia Moffet is married to the tenth Doctor Who, David Tennant. She met David when they were on the set of Doctor Who and she was playing the daughter of the Doctor.

In the early days of his career, Peter thought he might become a musician; singing and playing various instruments, and writing songs, some of which he had taken up by record producers. He and his previous wife, Sandra Dickinson, wrote the theme song to the children’s programme Button Moon.

Now a great deal of his work is in stage musicals; so music and singing have taken centre stage again. You’ll find a great deal more of these connections in his book.

In his foreword to the book, his son-in-law, David Tennant describes him as “a great actor, a beloved grandad and a lovely man”. This is a fitting tribute to a man who hopes he has founded an acting dynasty: his daughter is an actress married to an actor, and their four children will probably be actors. His two sons from his marriage to Elizabeth Morton tell him they are going to sign up as well. His nephew is also an actor and his niece is about to leave drama school.

Is there Life Outside the Box is published by John Blake Publishing Ltd in hardback £20.00