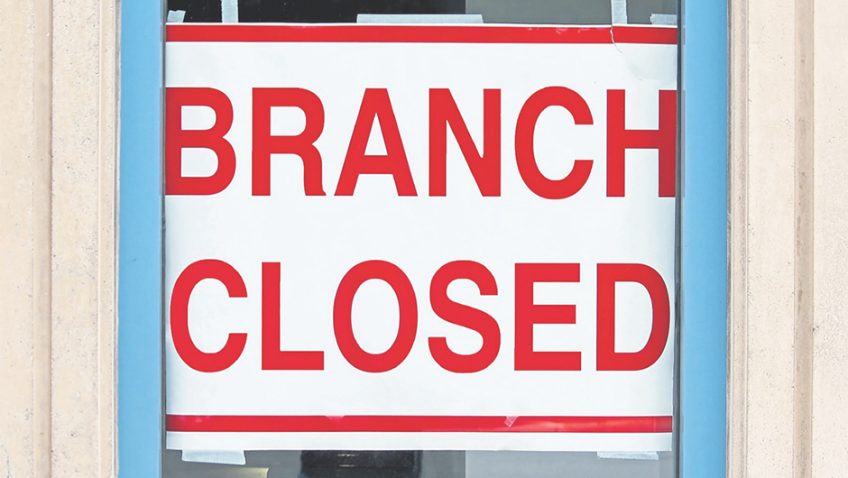 Banks have once again been the focus of media attention for the wrong reasons; TSB customers suffered chaos as the bank migrated its computer systems from former owner Lloyds Bank to new owner, Spanish banking group Sabadell.

However, over the last few years, one of the main bones of contention from bank customers, especially the elderly, have been the larger number of boarded up bank branches which have become an increasing and worrying sight on our high streets, right across the UK.

This trend shows no immediate signs of slowing down, with all the major banks planning even more branch closures this year.

Disappearing bank branches is not just an issue for rural areas; the impact is being felt just as keenly in urban areas, towns and cities. Many of us have had to come to terms with our community no longer being served by a bank branch. Most of us are aware of the issues of loneliness and isolation and the closure of bank branches removes yet another place where people could interact and chat to others from our communities.

All the banks site our changes in behaviour as the reason for branch closures; we are using them less and are turning increasingly to online banking in preference to paying a visit to the local branch. Whilst this may be true for some, it is by no means the case for all, especially the elderly and vulnerable.

Many older people already feel left behind by the digital age and now fear financial exclusion, too. The practicalities of being able to get to a bank in a neighbouring town seem to be at best under-appreciated, or at worst, ignored. The impact on people and communities do not appear to be considered when decisions are made and some feel that the assumptions made by the banks are at odds with the reality of how people actually live their lives.

Ruth Smeeth is the Labour MP for Stoke-on-Trent North and Kidsgrove and is very concerned about the impact that bank branch closures is having on her constituency and her constituents. In February this year she secured a debate on this very issue in the House. Here she tells MT her concerns:

‘The local bank branch is in many ways the heart of a community. It can be a lifeline, especially to the elderly and vulnerable for whom the baffling, faceless world of online banking can be a real struggle. And it is disappearing from our high street at an ever-increasing rate.

‘These bank branches have provided, and continue to provide, a vital function for their local customers. Whether it’s the pensioner withdrawing their money for the week, the local business depositing the day’s takings, or the young family looking to take their first step onto the housing ladder, having easy access to advice and services can be crucial.

‘Yet these branches, well used as they are, are fading fast from our high streets. In 1988 there were 20,585 branches across the country. By 2012 that figure had dropped to just 8,837. Since then the pattern only seems to have accelerated. In fact, in the last 3 years, a further 1,500 branches have been closed.

‘In my own constituency, we’ve seen a spate of local bank closures, which risk undermining local businesses and leaving elderly and vulnerable residents adrift. In fact, all three of the main towns in Stoke-on-Trent North and Kidsgrove are currently facing the loss of popular local branches. In one instance, the next closure will leave them without a single bank branch in the town.

‘The nature of banking is changing and technology has altered the way in which many of us handle our finances. But the truth is, there is still huge demand for the services that local branches provide.

‘While 63% of people in the UK reported using online banking in 2017, only 30% of those over the age of 65 have done so. Yet again, the elderly are being ignored as the discourse becomes dominated by talk about the liberating power of technology. For those unaccustomed to smartphones and Internet banking, there is nothing liberating about being unable to travel to a local branch or to have a face-to-face conversation with a financial adviser.

‘Meanwhile, businesses who deal with high volumes of cash find themselves forced to travel to neighbouring towns just to deposit their takings.

‘While these closures may be a national problem, do not presume that people are being afflicted equally. In fact, the poorest third of the population have borne the brunt of two thirds of net closures. Far from living up to the mantle of “community banking”, our financial institutions are neglecting millions of the people they exist to support.

‘This can have long-term repercussions for the whole community. The Campaign for Community Banking Services has argued that bank closures contribute to the commercial decline of an area as better off consumers change their purchasing habits and begin to shop, bank and socialise further afield.

‘Worse still, closures are associated with a real decline in local bank lending. Small to medium enterprise (SME) lending growth is dampened by an average of 63% in postcodes that lose a bank branch. And that figure grows to 104% for postcodes that lose the last bank in town.

‘This is an issue that I have sought to address in Parliament, and the support I received from colleagues of all parties, showed that this is a major issue right across our country.

‘But there is still far more to be done to ensure that this matter is taken seriously and that people no longer find themselves cut off from the services that they depend upon.

‘We all recognise that times have changed, and we must change with them. But we must ensure that we manage that change in a way that ensures our communities are not left behind.’

The effect and speed of the closures can be seen in research published by consumer group Which? in 2017. Their figures showed that there were 461 closures in the 2015 calendar year, increasing to 583 in 2016 and further to 703 in 2017. This rising trend is looking set to continue with RBS Group already announcing this year that it was to cut a further 269 branches (about a quarter of its total network), Lloyds Bank announcing a further 49 closures and Barclays a further 43 – that’s 361 closures announced this year already and we haven’t even got to the end of April.

If this sounds all too familiar, we’d love to hear from you. Equally, don’t forget to make your local MP aware of how this is impacting you and your community.