Home / NEWS / CAMPAIGNS / Act F.A.S.T. campaign returns to empower people to call 999 at any sign of a stroke 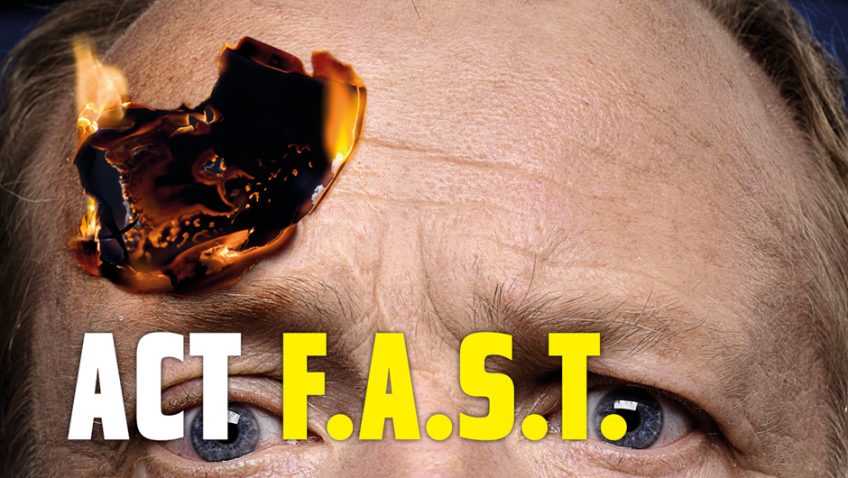 Act F.A.S.T. campaign returns to empower people to call 999 at any sign of a stroke

These messages are particularly important for people who are more likely to experience a stroke which includes people with medical conditions including diabetes, high blood pressure, high cholesterol, and atrial fibrillation (an irregular heartbeat). The campaign also focuses on their friends, family and carers and encourages them if they witness somebody showing any single one of the stroke symptoms to overcome any initial reluctance and ‘Make the Call’, dial 999.

The campaign is built around the ‘Act F.A.S.T.’ (Face, Arms, Speech, Time) acronym to emphasise the importance of acting quickly by calling 999:

Acting F.A.S.T. as soon as stroke symptoms present themselves can not only save lives but potentially limit long-term effects.  Approximately 110,000 people have a stroke each year in England. It is the third largest, cause of death, and the largest cause of complex disability; over half of all stroke survivors are left with a disability.  This campaign aims to highlight the role that others can play when someone is having a stroke, empowering them to call 999 if they notice any symptoms.

Radio DJ Mark Goodier, who had a stroke last November, tells how he lost the feeling in one side of his face and how his family recognised the signs so called 999 immediately. Because of their fast reaction, he was treated quickly and three months later, Mark is recovering well and returned to work this month (February). Mark wants to highlight the vital role anyone can play in helping to save lives or preventing severe disability.

Presenter and journalist, Anna Richardson, shares the story of her father who had a stroke a few years ago. He was unable to make the call himself but was able to contact a neighbour who immediately recognised the symptoms and called 999. Again his neighbour’s fast response meant Anna’s father recovered quickly and avoided permanent disability.

Psychologist, Dr Lasana Harris has highlighted the concerns and fears some people have to acting fast in an emergency because they may worry that they do not have the person’s permission to interfere. Dr Harris stresses that a stroke is a medical emergency and people need to act fast regardless.

New statistics reveal that a stroke kills over 40,000 people a year and almost two thirds leave hospital with a disability. With over 100,000 strokes a year in the UK, the new Act FAST films are encouraging everyone – whether they are a stranger in the street, a family member at home or the person themselves – not to ignore the key symptoms and to call 999 immediately if they notice even one of them. Getting appropriate treatment can reduce the amount of brain damage and ensure a better chance of making a good recovery.

“Anyone can have a stroke and one occurs every five minutes in the UK. As a leading cause of death and disability in this country, it is clearly a medical emergency.

“Acting fast makes a huge difference; you are more likely to survive a stroke, and make a better recovery, if the call to 999 is made without delay if any single symptom is spotted. The faster you act, the better the chances of a good recovery. Search ‘Act FAST’ for more information.”