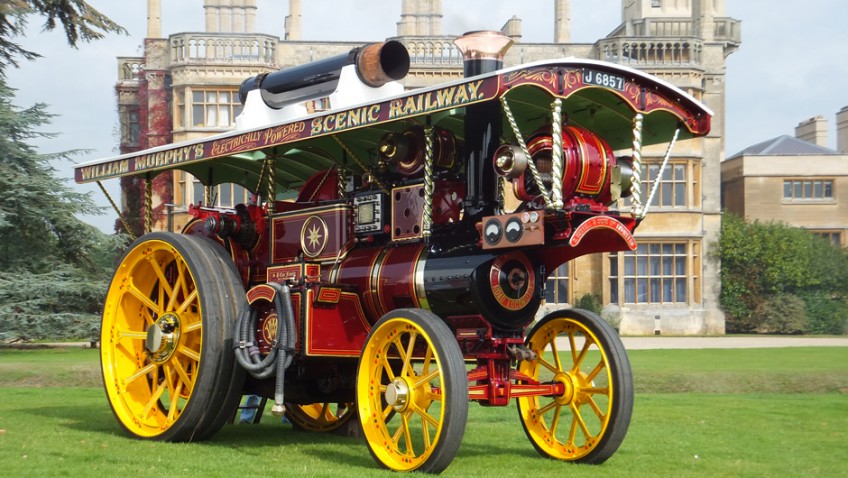 So far this summer we have enjoyed many festivals from literature and culture, including crime novels, music from jazz to Glastonbury, farming and wildlife; and now we are getting ready to find out more about machines, from monster trucks to the nostalgia of steam.

Traction engines, or general purpose engines, were the all-rounders of the steam world. Produced by nearly all the English steam engine manufacturers they were commonly used for threshing corn, sawing wood, crushing stone, haulage and many more varied tasks.

Development of the traction engine started in the mid-18th century and by around 1870 the standardised design was settled upon. No one manufacturer dominated production and debates raged for years about who had made the best engines. They were built in a range of sizes although rules between builders prevented very small models being made.

General purpose engines were too expensive for small farmers and normally owned by contractors who moved from farm to farm to carry out their work.

Road locomotives were larger versions of general purpose engines built with the sole purpose of hauling large, indivisible loads. They sometimes worked in pairs, and occasionally three or more engines were needed to pull exceptionally large items. They were produced from the end of the 1800s right up until the end of steam production in the 1930s.

The showman’s road locomotive was a modification of the standard one, which first appeared in the 1880s and was additionally fitted with an electrical dynamo at the front of the engine and a full length canopy to protect it.

Their job was hauling, then powering fairground rides of the day, they were amongst the hardest worked of all engines. Some, but not all, were more ornately decorated than other types of engines with additional brasswork, bright paint and electric lighting to allow them to be operated after nightfall. They were almost always named and are now most sought after by traction engine enthusiasts.

Very few showmans’ tractors were constructed as such when new. More likely they were standard steam tractors which were converted to showmans’ specification later in their working life, and their popularity is centred on the romance of the work that genuine examples undertook.

These were produced in vast numbers from the late Victorian period up until the Second World War. They were commonly available in two forms, undertype with the cylinders mounted under the bodywork and overtype with the cylinders mounted on top of the boiler in a more conventional way. Makers had their preferred arrangement, but generally experimented with both ways to achieve the same type of work.

Steam wagons were faster on the road than standard traction engines and were produced in vast numbers from the late Victorian period up until the Second World War. By the 1930s they were capable of in-excess of 50mph.

Changes to legislation in favour of internal combustion powered lorries made them expensive to run and they fell out of favour during the 1930s. It was not unusual however to see well-worn steam lorries working as late the 1950s.

There is something magical about the power of steam and these massive engines have an army of fans around the country with many displays and events celebrating them taking place this autumn.

For more information, visit: The National Traction Engine Trust at www.ntet.co.uk and Steam Heritage at www.steamheritage.co.uk.