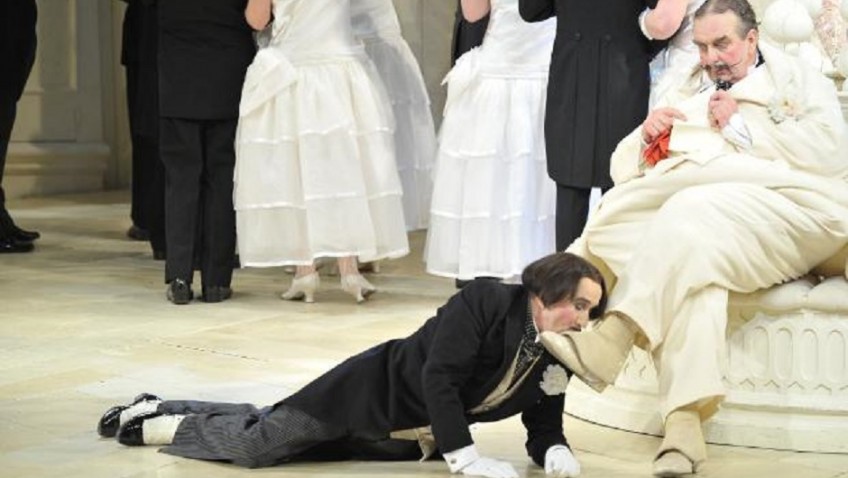 A standing ovation for Jonathan Miller, director of The Mikado

THE MIKADO had its premiere in 1885 when things Japanese were all the rage in England. It ran for 672 performances but the only Japanese thing about it was the settings and fabrics.

The satire is directed against British targets. However, it did cause offence to the Japanese and performances were banned in 1907 during a royal visit to Britain by Crown Prince Fushimi.

Some people, in view of what has been happening in the Middle East today, may find jokes about beheadings no longer funny.

There has been a Jazz Mikado, a Swing Mikado, a Hot Mikado, a Black Mikado, a Cool Mikado, a Catalonian Mikado, a Metropolitan Mikado and even a ghastly cricket Mikado (not so much yum-yum, as yuck-yuck).

Jonathan Miller’s production has been a firm favourite at ENO for nearly thirty years and regularly revived whenever ENO was in financial difficulties.

The action is updated to the 1930s and set it in a hotel in St Moritz. The hotel ballroom, designed by Stefanos Lazaridis, is all in dazzling white. Syrie Maugham would have approved.

The fact that much of the libretto does not make any sense in this context has not seemed to bother audiences at all.

The comic high spot, as always, is Richard Suart’s hilarious performance as Ko-Ko, the Lord High Executioner, groveling at the feet of the obese emperor whose suit he dusts and whose shoes he licks.

Robert Lloyd is wearing the largest fat suit you ever did see. The bellboys and waitresses are ready to tap-dance at a moment’s notice.

It’s all great fun and as spick and span as ever it was. Jonathan Miller was in the auditorium and received a standing ovation.