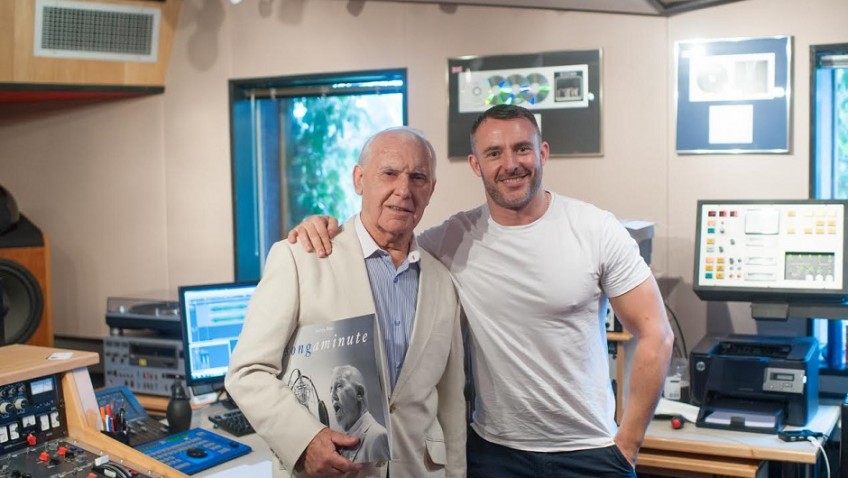 ‘Songaminute Man’ Teddy Mac’s son says he has been “absolutely overwhelmed” by the wave of support that has propelled his dad into the pop charts with his debut single, which is raising funds for Alzheimer’s Society. Simon McDermott spoke of his pride as it was revealed today the 80-year-old former Butlin’s Redcoat, who has dementia, has reached number 43 in the Official Singles Chart after being signed up by prestigious record label Decca Records.

“I’ve been absolutely overwhelmed by the reaction to dad’s singing, not only in terms of the amount of people who’ve bought his single but because of the kind messages of support.

“Lots of people have said they’ve found dad’s music really uplifting and they’ve played his songs to parents who’ve got dementia because it’s struck a real chord with them.

“There’s no way I could have expected anything like him hitting the charts when we first started singing for fun in my car. Dad’s really picked up on the fact people know about his singing which has been amazing for him and for us as a family. It’s been his dream come true.​”

Teddy ‘Mac’ McDermott shot to fame online as the ‘Songaminute Man’, when Simon posted videos of him singing during their very own Carpool Karaoke on YouTube. The videos rapidly went viral and raised more than £125,000 for Alzheimer’s Society, paving the way for Teddy’s hit single – a cover of Frank Sinatra classic “You Make Me Feel So Young”.

“The most important thing has been the way he has raised so much money for Alzheimer’s Society, which will be used to help people affected by dementia.

“I was inspired to start fundraising for Alzheimer’s Society because I turned to their National Dementia Helpline after a particularly bad summer last year when I was really struggling to cope. “I’d found some aspects of dad’s behaviour terrifying at times. It was only when I spoke to a woman at the Helpline that things took a turn for the better. She gave me hope. I realised we weren’t alone in all this. There was a way of coping.

“That’s why I wanted to pay something back to the Alzheimer’s Society. If that woman hadn’t been there I wouldn’t have known what to do.

“I’d really like to thank everyone who has supported my dad and the Alzheimer’s Society, who help a lot of families like our own who are affected by dementia.”

Royalties from the single will be split between Alzheimer’s Society and the McDermott family.

“Teddy is truly inspirational and we would like to congratulate him on his incredible chart success.

“There are currently 850,000 people living with dementia in the UK. Teddy’s story shows us that you can still achieve amazing things if you are living with the condition.

“So far more than £130,000 has been raised for Alzheimer’s Society by Teddy and Simon and we are extremely grateful that their musical exploits will help us fund services such as our National Dementia Helpline which prove so vital to families like the McDermotts.”

Anyone worried about dementia can call Alzheimer’s Society’s National Dementia Helpline for information, advice and support on 0300 2221122.