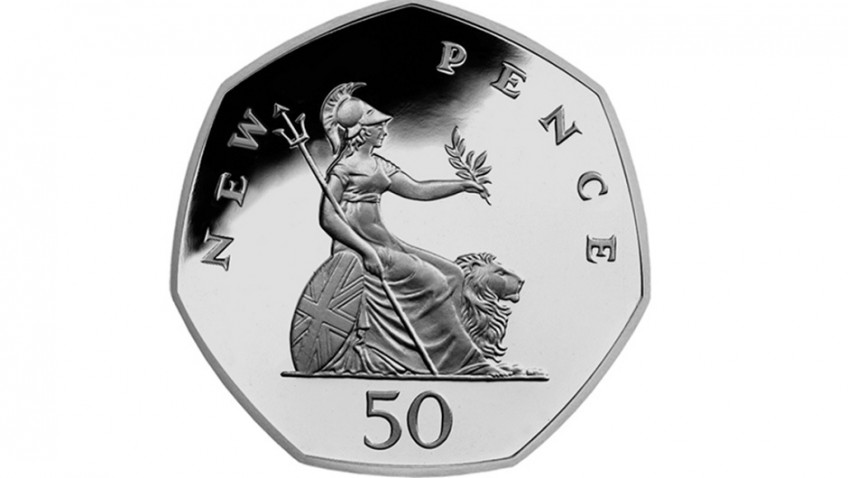 50 pence coins: The art in your pocket

Sherlock Holmes once famously said to his faithful companion “You see Watson, but you don’t observe.” The great sleuth was referring to the number of stairs ascending from Baker Street to their first floor apartments. Watson had climbed these stairs for years, yet had no idea how many steps there were. We are all guilty of overlooking the everyday, and a fine example of this is our very own humble fifty pence coin. We are familiar with it up to a point, most of us would know that the Queen is on one side, and Britannia on the other, but how many of us are aware that there are over fifty different designs all still in circulation today, and all of them can easily be found in our purses and pockets.

The original fifty pence coin was introduced in 1969, the first ever seven sided coin in the world! It replaced the old ten shilling note. The reverse side of the coin featured a seated figure of Britannia, and the words 50 new pence. In 1982 this was changed to fifty pence. In 1997 a lighter and smaller 50p was introduced, and the old coins were removed from circulation, and this is where our search begins for the 54 different designs, which can all be found in our loose change today. 2004 heralded the first coin ever to feature a living person, other than the reigning monarch. There are plenty of clues on the coin, but can you guess who it is? * Other notable designs featured the Victoria Cross, the Boy Scouts and of course, the Girl Guides. The WWF were commemorated in 2011, and this beautiful design by Matthew Dent is actually the third rarest of all the non-Olympic fifty pence coins.

In 2008 another Dent design came along which became the new definitive image, and replaced Britannia, much to the dismay of many notable politicians and Daily Mail readers!

This coin featured a section of the Royal Arms showing elements of the third and fourth quarterings, which when placed next to the other circulating coins, actually makes up a full shield. In 2011, in anticipation of the 2012 London Olympic Games, the Royal Mint decided to mint coins for all the sports being played, a staggering 29 different designs. These coins were only minted in low numbers, and are well worth looking out for. A full set will sell for £75 on eBay, which is not a bad return on £14.50! The five rarest Olympic 50 pence coins are Tennis, Triathlon, Judo, Wrestling and Football, so these are well worth keeping if they turn up in your change! 2016 continues the trend by the Royal Mint, to bring out many more new designs. Look out for the Battle of Hastings, Rio Olympic Games, Beatrix Potter, and at least four of her creations including Peter Rabbit and Squirrel Nutkin.

These are sure crowd pleasers, and will be much sought after by collectors and the general public too.

So please do look out for those beautiful 50 pence coins, and admire the craftsmanship and artistry that has gone into their design. Maybe you will just enjoy them and pass them on, maybe you will buy yourself an album and try to collect them all, or maybe you will try to make a few bob by selling them on eBay! After all the rarest of them all, the wonderful Kew Gardens sells for between £30 and £40 pounds, so that is one coin you must not spend on a bag of crisps!