Home / LIFESTYLE / Silhouettes in the Fog – an exhibition

Silhouettes in the Fog – an exhibition

In 1915, rumours began circulating on the Western Front about a deadly, pale yellow fog leaving a devastating scene of hysteria, suffering and death on the Allied trenches at Ypres.

Scottish War Blinded will describe the seldom told story of surviving blinded soldiers returning to Scotland from the Western Front through a World War One commemorative exhibition at Central Library, Edinburgh from Monday 10 to Saturday 15 November 2014.

Titled ‘Silhouettes in the Fog & Guiding Lights: The Foundation of Scottish War Blinded’, the exhibition describes the development of chemical warfare in World War One, trauma care on the Western Front as well as attitudinal change in the UK and the rehabilitation and training provided to blinded soldiers by Scottish War Blinded. 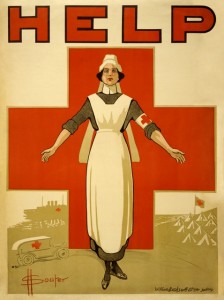 Chemical warfare contributed towards 188,706 Allied casualties in World War One inflicting permanent blindness, respiratory problems and psychological disorders on those who survived.

For many blinded soldiers returning to Scotland, life would never be the same again unable to return to previous employment and engage in public life.

Scottish War Blinded founded in 1915 to support blinded soldiers in their rehabilitation. They were trained in a wide variety of trades such as woodwork, piano tuning, poultry farming and basket weaving. Upon completion of training, blinded soldiers were provided a means to seek new employment and live independently across Scotland with the assistance of aftercare workers.

“It is hoped Scottish War Blinded’s World War One exhibition will enrich the existing programme of commemorative activities organised in Scotland over the next five years. The impact of war blindness during the period is seldom publicised and we encourage people of all ages to learn about the foundation of Scottish War Blinded in 1915 to meet the long term support needs of blinded soldiers.”

The exhibition space has an area dedicated to Scottish War Blinded’s World War One Remembered Project commemorating the relatives of its members who served in the Great War as well as a World War One art exhibition produced by members who attend its Linburn Centre in Wilkieston.

The exhibition opening hours are from 10am-8pm and admission is free. Scottish War Blinded has worked with Imagineear to produce an audioguide accompaniment to provide an engaging presentation for general visitors as well as an essential tool for visually impaired people.