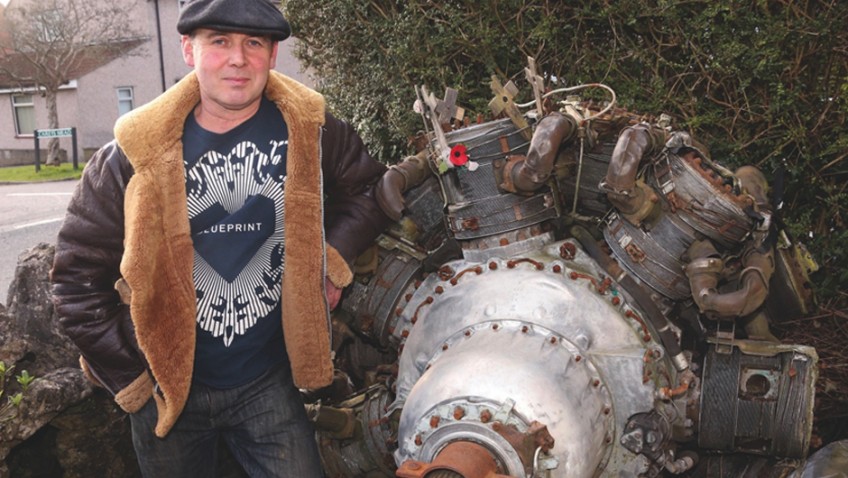 A military nut has set his sights on rebuilding a rare WW2 bomber in his garden shed. Martin Smith, 50, started on his very own Short Stirling after finding a shelf full of aircraft instruments in an army surplus shop. He tracked down the source of the stash to a shed being cleared out after its owner had died, and found a cockpit seat about to be burned on top of a bonfire. Since then he has found parts from over 30 different Short Stirlings, either salvaging them himself or finding them on eBay, at auctions or via word of mouth.

Martin reckons he is around 85% towards his target of building the front end of the plane. He had originally planned to recreate one of the more famous Lancasters but opted for the rarer Stirling because it presented a bigger challenge. The plane, which first flew in 1939, was the first British-built four-engine bomber of WW2 and it is thought there is not a complete model in existence. Martin is limiting himself to the task of piecing together the 30ft-long nose of the plane, which will not include the wings. But with his garden shed only measuring 20ft x 12 ft he has still got a huge task on his hands.

The metalwork restorer from Holcombe, Somerset, said: “Initially I was going to do a Lancaster but there’s about ten Lancaster home builds in this country, so there is no point in doing that. “I’ve spent a lot of money trying to get the parts – it depends if my wife Karen is reading this or not – but I would say well into the thousands. “I also swap parts – I traded a Lancaster part for the control column in Holland which was the only complete one in the world. I’ve been swapping things since I was about five years old – I guess I’ve just upped the scale.”

Martin said he found some of the parts by chance – like the occasion he was working on what he thought was a fuel tank from an old lawnmower. He said: “I was doing a bit of work on it and I thought I’d seen it before. “I looked through the manual and there it was – a hydraulic fluid tank off a Stirling. I persuaded the owner to part with it.” On another occasion he salvaged one of the aircraft seats from being cut up for a drag racer on the very morning it was to change hands.

Despite his collection of aircraft parts now being well into the thousands, Martin still has to make some himself as they are impossible to obtain. But he says he only needs the pilot’s seat and the throttle box before he can start putting it all together – which he reckons will take him another five years. When complete, Martin says he will build removable panels in the bomber so people can look inside and it can be used for film work.